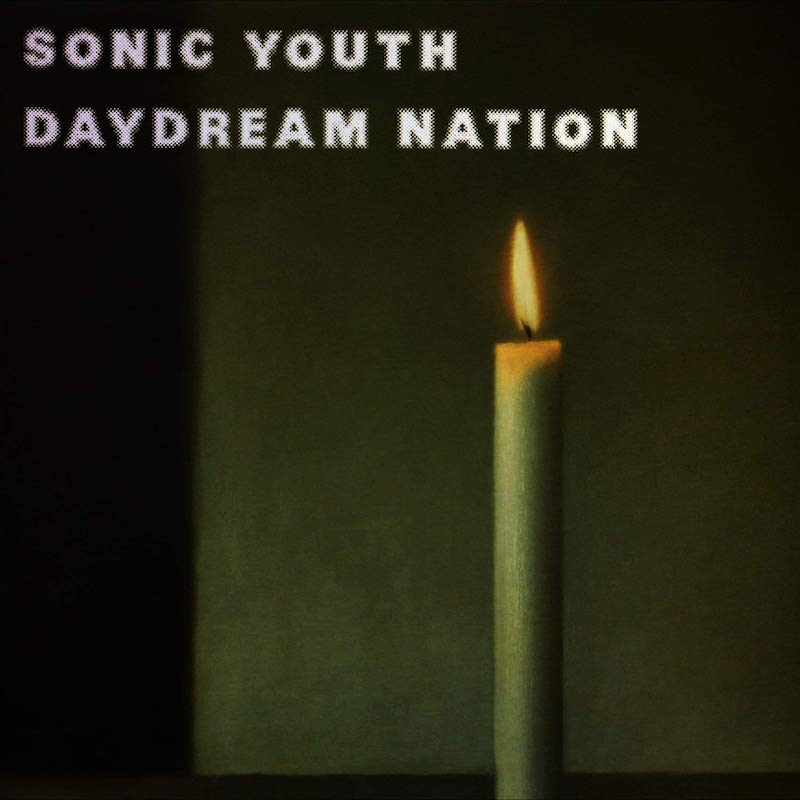 The essence of Sonic Youth’s finest album feels like a deep exhale. Now reaching its 30th anniversary, Daydream Nation accomplished at the time what others could not: dragging the array of eccentric styles out of the basement and into the light of day for those not on the Lower East Side to finally bask in, and to transform popular music in the process. Its synthesis of bottled-up sounds flicks at moments like sediment, while suppressed chords curdle into a timeless malaise. Offered as a double album at the time, Daydream Nation is noted by author Matthew Stearns as being among that format’s Holy Trinity of the period, along with Zen Arcade by Hüsker Dü and Double Nickels on the Dime by The Minutemen. Neither of those, however, got the recognition Sonic Youth’s release did, for good reason. In addition, Nation aged incredibly well and the respect for Sonic Youth’s performance has held up over the years. Hailed as a triumph in 1988, Nation has retained many of those accolades in the decades since.

How Sonic Youth, among underground rock’s most peculiar and polarizing quartets, pulled off what would be regarded as a hit during this era is one of music’s great legends. Sonic Youth had become, by 1987, somewhat notorious for its lolling performances and freewheeling approach to music. Look no further than 1983’s Confusion is Sex or EVOL from 1986 for virtuoso depositories of nocturnal lo-fi and sophisticated blasts of questionable repute. Embraced by the now defunct Village Voice and other critics, Sonic Youth was, to be generous, at points reviled by the punk scene with which it is often lumped in; a particularly withering anti-Sonic Youth essay ended up on the cover of the group’s 1987 EP Master=Dik. Sister, from 1987, marked a tectonic shift for Sonic Youth from its irascible but affectionate no wave to more accessible noise pop songsmithing. The change drew out more than its share of detractors as a result. Expectations were high as the band headed into the studio for Nation. Would Nation mark a return to Bad Moon Rising era Sonic Youth or mark a further incursion into the mainstream?

An old saying goes that every generation wants its own heroes. And, in the years since Sonic Youth had this musical reckoning leading up to its breakout album, it seems every one of us has seen this existential question play out again and again. Whether it was Sonic Youth contemporary Kurt Cobain’s mirthless examination of his own fame that ostensibly led to his suicide or the gut check for Sonic Youth’s extended musical progeny today like Father John Misty, Kurt Vile and scores of others, determining where credibility and integrity begin and end is elusive. Undoubtedly, Sonic Youth and Daydream Nation continue to inspire many genres and performers. How profoundly those three weeks of recording Nation in the summer of 1988 at New York City’s Greene Street’s Studio A stumbled upon a debate we still have now is less remembered.

Nick Sansano is credited among many historians for shaping Daydream Nation’s direction. The engineer, best known for working on Public Enemy’s “Black Steel in the Hour of Chaos” (off PE’s It Take A Nation of Millions to Hold Us Back, also celebrating its 30th anniversary this year) and Rob Base and DJ E-Z Rock’s “It Takes Two,” exposed Sonic Youth to some of these tracks during a pivotal moment of the process. At once, the restless storytelling and multi-layered soundscapes emblazoned into the Sonic Youth canon found a subversive Google Translate of its own, a foil in stylings that had yet to find their own acceptance, too. Where youth culture offered a visceral menace in the burgeoning multi-screen, multi-service media landscape piped into flyover states, there was an undeniable allure as well. This music undermining the dominant order was a rebel polemic that would eventually run the world. In this regard, Sansano and mastering engineer Howie Weinberg (whose credits include Herbie Hancock, Sly and Robbie and the Ramones) captured this cultural epoch by simply siphoning bubbling-up pop gasoline into Sonic Youth’s combustible arrangements to great impact. This chemistry was so effective because no one seemed to be compromising much of anything.

And on the subjects of impact and acceptance, 30 years later, could the due Kim Gordon has finally received be any more gratifying? Today as a performer, author and tastemaker, Gordon is music royalty. During those years, her contributions were largely overshadowed by husband Thurston Moore’s quirky (and today revealed as more problematic than originally thought) inclinations. Yet Gordon’s is the first voice heard on Daydream Nation—emblematic of her prowess as a commanding vocalist. “Don’t displace me… Don’t dismiss me… we will fall” she muses in “Teen Age Riot,” the rumbling start to Nation. Her segue did not make the official video Sonic Youth released for the single, but Gordon’s voice would guide more of the record as it crested.

“Are you for sale? Does ‘fuck you’ sound simple enough?” Gordon’s line from “The Sprawl” would become one of Daydream Nation’s most memorable spots. The song, such as “Silver Rocket, “Total Trash” and “Candle” among others, would lay out a blueprint that punk, noise pop and many other genres would borrow against into the current generation. Songs motivated by the words of poets and fiction writers (“Hey Joni,” “The Wonder”), politics (“’Cross the Breeze”) and experimentation (“Providence”) poured seed onto fertile soil. Plaintive builds would surge into Neil Young-esque guitars and quintessential post-rock drumming, into broken melodies that were catchy as they were creative and weird. This was It Takes A Nation of Millions to Hold Us Back for disaffected suburban kids and self-important college students. Timeless though this formula might be, this was also the soundtrack for many a road trip for those of a certain age, the defining sound of what would become known as alternative rock and otherwise be called modern rock. Even at its most aggressive—“Kissability” or the final collection of “Trilogy,” featuring a cut forged by ZZ Top and a murder—the pensive, whirring Sonic Youth of “The World Looks Red” had given way to a more inclusive aural than ever before.

Daydream Nation would usher in a sunrise for noise pop, forever basting the subgenre into independent rock and pop by making it indispensable among the tools the music had on hand. Pitchfork, Rolling Stone and the Library of Congress are among those to recognize Nation as a masterpiece. Unfortunately, Sonic Youth’s subsequent albums, while excellent, could never quite make the statement Nation did. The potent pairing of Gordon and Moore that lifted Sonic Youth would also be its doom. Amid years of Thurston Moore’s infidelity, Kim Gordon would divorce her bandmate and Sonic Youth came to an end.

From the gentle strains of opener “Teen Age Riot” to the frantic end of “Eliminator Jr.,” the 12-track/14-song fifth album by the New York renegades is distinctive for its iconic intersections of avant-garde, noise rock and post-punk. Steve Shelley’s thick, cluttered drums, Lee Renaldo’s corrosive guitar and the pealing, obsessive songwriting of Gordon and Moore (who penned the bulk of Nation) come across as informed by many eras and influences. The strains of classic rock, injections of metal and grind, fragile electroacoustic folk and blunt, breathless non sequiturs are only matched by silvery lyrical themes and studio vivisection gone wrong in an oh-so-right manner. That the record, now in many iterations of anniversary editions, still fits well, alternate takes and all, alongside current releases may tell you all you need to know.