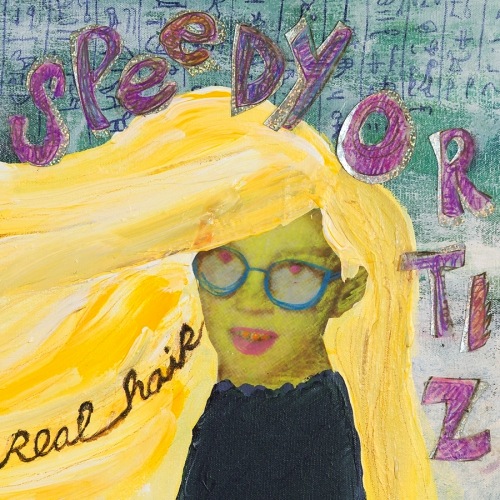 The best song on Speedy Ortiz’s consistently great 2013 album Major Arcana was “No Below,” a relatively slow, yet soaring ballad about finding a kindred spirit in those most vulnerable of teenage years. It’s the stuff that great coming-of-age films are made of, packaged in three minutes and 45 seconds of brilliantly melodic indie rock. This is significant not just because it’s a great song (because, man, it is), but because Major Arcana mostly concerns noisier, post-hardcore-leaning rock songs that split the difference between Helium’s hook-laden skronk and Unwound’s atypical abrasion. And yet, at the center of the record was this sparkling gem, a plain-spoken mixtape staple destined to be dropped inside of a locker as a way for some sensitive misfit to say, “I like you.”

That a track like “No Below” is a bit rare in Speedy Ortiz’s catalog is what makes it special. On the band’s new EP, Real Hair, there isn’t really anything that follows a similar pattern. The four songs on this 13-minute release come a lot closer to the immediacy and punch of “Pioneer Spine” or “Tiger Tank,” songs whose earworms don’t burrow directly, but get sidetracked through channels of dissonant riffs and jerky rhythms. And there’s no reason why they shouldn’t; Speedy Ortiz absolutely kill at this sort of thing.

These four tracks are no exception, in particular EP opener “American Horror,” which plows forth on one of the band’s catchiest riffs and some of Sadie Dupuis’ down-but-not-out wordplay (“You could have guessed/ you’d be out on a stretcher, after your home stretch”). “Oxygal” finds the group descending back into some of their most furious and tense sounds, splitting the difference between Fugazi’s ferocity and Shudder to Think’s oddball artiness, whereas “Everything’s Bigger” simply roars, as every phenomenal guitar-rock song should.

The tone and pace of Real Hair doesn’t change much, Speedy Ortiz dropping the tempo only slightly on its discordantly melodic closer “Shine Theory.” It’s not a marathon — it’s a sprint. And that’s essentially what a good EP should be, offering a quick jolt when you need it most, which Real Hair most certainly does. Which doesn’t mean that the band isn’t saving their more nuanced sounds, or more sensitively sincere storytelling, when the time is right. It’s just that Real Hair is a showcase for the group’s louder, brawnier rock songs — all of which are a punch to the gut in the best way possible.