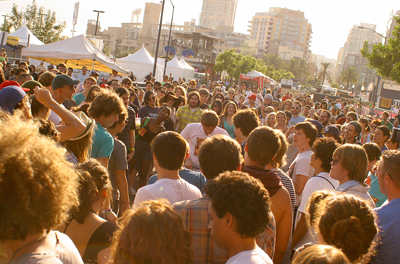 Coachella and SXSW have come and gone, and Memorial Day weekend is just around the corner, which means that summer festival season is upon us. Several smaller festivals around the country have already taken place this month, and many more will happen well after summer has faded. But for the next three months or so, hundreds of thousands of music fans will have the opportunity to see some of the biggest rock bands and pop artists in the country perform in unique settings. But for those just getting around to making summer festival plans, it’s best to get on the ball ASAP. Some of these massive events are already sold out, and others are likely to reach their limit soon. Nonetheless, we at Treble would like to help make that festival decision just a little bit easier. So, we’ve selected ten of the most prominent summer events happening in North America this year. Some are in large open-air fields or parks, others are more like SXSW, held in individual venues in a given city. But each of them has their pluses and minuses, so check our rundown to find out who’s playing where, and how much it’ll cost you to participate.

Pros: This is one of the last opportunities to see Wolf Parade; Archers of Loaf!; a refreshing absence of groan-worthy headliners.

Cons: High likelihood of wet, rainy weather; you have to pay to take a shower; a surprising shortage of good hip-hop.

Pros: The trifecta of The Roots, Nas (backed by The Roots) and The Dismemberment Plan all at one show; the possibility of lots of Roots guest jams; it’s only one day, so that clears up any doubts over committing your entire weekend to a dusty field.

Cons: It’s only one day, so if your flight arrives late you’re out of luck; Ticketmaster fees.

Pros: There’s pretty much something for everyone, which not only includes music but comedy as well; The Bonnaroo sports bar has plenty of activities and beer for those who need a break from jam sessions.

Cons: I want to take a shower just thinking about it; lots and lots of jam bands; geographical isolation.

Pros: The lineup is loaded with good bands; the ticket price is surprisingly low given the quality of the talent; um, hello, Dismemberment Plan!

Cons: Some of the quieter, paler, indie-er acts are probably going to underwhelm on a big stage under a hot sun; Odd Future publicity stunts; the inevitable Christopher Weingarten post-festival rant.

Pros: There’s a lot of diversity to the lineup, which is also long enough to keep anyone from getting bored; Perry Farell promises “haute cuisine from one of the Windy City’s top chefs.”

Cons: There’s also a lot of shit on the lineup; prepare to sweat; Farrell didn’t seem to try that hard to do anything interesting or special for its 20th anniversary.

Pros: The Meters!; San Francisco’s climate typically lends itself to moderate summer weather; A Taste of the Bay Area and Wine Lands to appease the foodies.

Pros: This is one of the few summer festivals that Tom Tom Club are playing; lots of local gourmet food trucks will be there, which suggests the meal options are likely better than typical festival slop fare; seems much more low-key than festival juggernauts like Lollapalooza.

Cons: This is the first year, so chances are there will be some kinks to work out; the price seems a little steep for a mostly chill indie rock lineup.

Pros: The ridiculously diverse lineup features everything from indie rock heroes to black metal, avant garde and electronic artists; casual attendants may get into select venues for just $25 (this option is much more limited though).

Cons: Not all venues have the same age restrictions, so do your homework; like SXSW or other urban-based festivals, this will probably require some extra planning ahead in order to figure out who you’re seeing and how to get there.

Pros: The price is hard to beat; Polyvinyl Records 15th Anniversary Celebration; the separate venues make this a lot less like one of the bigger monster summer festivals.

Cons: SXSW acid flashbacks; hotel room scarcity, compounded by a U of I football game the same weekend.

All Tomorrow’s Parties Presents: I’ll Be Your Mirror
Website

Pros: This is the only festival at which you’ll see a performance by Jeff Mangum; for that matter, the entire lineup is hand-picked by Portishead, and therefore quite a bit different than the rest of the festival circuit; you never know if Bruce Springsteen’s going to be hanging around.

Cons: The maximum capacity is 4,000 people, which is a good thing in terms of intimacy, but that also means a lot of people that might want to go might not be able to attend.