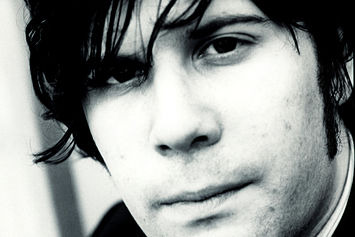 In this week’s edition of Best Song Ever, we’ve prepared an EP’s worth of songs that hit us where it hurts. Some of them are pure joy, others make us more than a little teary-eyed. Excuse the outpouring of emotion here, but if they didn’t have that sort of power, they wouldn’t be the best songs ever. You’ll laugh, you’ll cry…you’ll play them again.

“Apple of My Eye”
by Ed Harcourt
from Here Be Monsters

The first time I heard the smoky, loungey, makes-me-wanna-hand-clappy “Apple of My Eye” was on cassette during a drive from San Diego to San Jose. The distance between the cities is roughly 500 miles. “Apple of My Eye” was with me for at least 460 miles of the journey. Through stormy weather and the acidic air of Los Angeles, through the wasteland of Interstate 5 and the fertilized fields redolent of cow patties, “Apple of My Eye” was there; taxing the rewind function of the car stereo, stretching its tape beyond capacity, leaving echoes of its sound along the desolate hills by that lone Carrow’s. In those driving hours, I’d quickly memorized the lyrics; I’d strained my voice as I sung along with Ed Harcourt; I’d swayed and bobbed in my seat; I worked out an elaborate dance routine involving spinning microphones, swaying mic stands, a chair, an overcoat, and a fedora; and I dribbled food as I sang along with my mouth full of chili cheese fries and Mountain Dew. And when I got home, I played it again, and again, and again. — Hubert Vigilla

“Sort It Out”
by Caesars
from 39 Minutes of Bliss

I first became acquainted with Caesars in high school, back when they were called The Twelve Caesars. I had just broken up with my then girlfriend and was, for lack of a more mature word, bummed. I could have turned to Morrissey or Robert Smith with my woes, but I found a cathartic release in a silly, catchy and loud-as-hell raveup by this Swedish band. Singer Cesar Vidal sings, “I wanna smoke crack/because you’re never coming back/I wanna shoot speedballs/bang my head against the wall.” It’s so absurd, it makes me laugh at my own sadness, as well as create a channel for me to release my frustration, even if it was someone else’s music. Only a high schooler would think he actually related to lyrics like those heard in “Sort It Out,” but even I could acknowledge the ridiculousness of the situation presented in the song. It’s no question that some people of lesser will would turn to addictive, life-shortening narcotics after a bad break-up. But The Caesars presented a much-needed reality check. Things, after all, aren’t really that bad. — Jeff Terich

This one’s a little hard to talk or write about. Even though its emotional relevance took place over seven years ago, these things usually have a half-life. Even though Ani DiFranco had released several albums before 1996’s Dilate, that was the year I first heard the punk folk songstress. What is the song about? A love triangle. What was I involved in at the time? A love triangle. Duh. And even though Ani’s incredible lyrics didn’t solve my problems, they at least lessened the pain a little. I could take any part of the song and dissect its meaning in relation to the situation I was in, but that would be too personal. What I can do is point out that sometimes lyrics speak volumes in simple poetry like I don’t look forward to seeing you again / You’ll look like a photograph of yourself / taken from far far away. I haven’t seen the former `object of desire’ since that time, and this is what I can only imagine the feeling would be like to see this person again. In this quiet and pained song, rather than wallow, Ani instead lashes out, albeit in teary frustration, at the situation when in the chorus she says fuck you / and your untouchable face / and fuck you / for existing in the first place. We all feel this way sometimes, that we wish we had never even met the people who broke our hearts, but then we wouldn’t get songs like this one. — Terrance Terich

“Darla”
by Why?
from Early Whitney EP

I spend my days working with people who have personality disorders. Some of them are trying to achieve true empathy towards others, while working to be a little less egocentric about themselves. Hearing “Darla” by Why? I was completely floored, and astounded by the lovely insights he sings about this person named Darla. He has compassion, worry, and altruistic thinking towards her. The very thing that I work so hard to have people attain. It’s so refreshing to listen to a song, and have it be everything you want for people in life. — Ayn Averett

“Blow It Out”
by The Features
from Exhibit A

I’m not the biggest Weezer fan. Sure, at one point, I owned the “blue” album and Pinkerton, but somehow I just lost my interest in Rivers Cuomo’s songs. They’re not bad, so to speak. But as I grew up, I felt like I had to leave Weezer behind. They were just a stage that I had to pass through, like I did with ska and emo. And since then, I just haven’t had the desire to listen to them. Their songs will come on the radio and I don’t get the same feeling I used to. But when I listen to “Blow It Out,” a song by The Features that essentially sounds like Weezer, I get an entirely new and exciting feeling. It’s the kind of song that every rock radio station should be rotating several times a day. It’s catchy, rockin’ and deceptively simple. In fact, it’s about listening to music, if you can believe it. Check the lyrics: “If you’re happy and you know it, turn the volume up and blow i-i-i-t out.” How very meta. — JT

Some songs sneak up on you, like fog on little cat feet or like a child in pajamas and soft house slippers. “I Don’t Want to Live on the Moon” is one of those songs. It’s a pleasant surprise, a song so simple yet strangely resonant and gorgeous; a song that reminds you of the people you love and how much you’d miss them if you were far apart. Sung by Jim Henson in the guise of Ernie, there’s a magic to Jeff Moss’ lyrics whether they speak of befriending fish, wishing on stars or meeting a dinosaur. These journeys and dreams, these vacations and getaways, however, are tethered back to a longing for home, family, friends and loved ones; always the thought, “I would miss all the places and people I love.” Nostalgia and love from a nearly childlike guise never came across so honest nor so beautiful. — HV