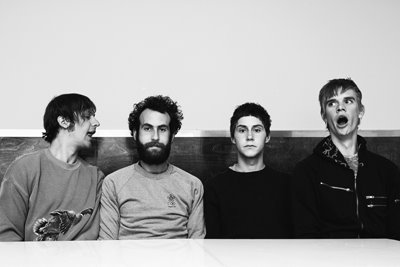 If you’ve somehow missed the rising onslaught of lo-fi in the last half of this decade, you haven’t been paying attention. Whether the washed-out tape fuzz of Ariel Pink’s lite-FM sounds, the raucous guitar blitz of No Age and L.A.’s The Smell scene, or the unbearably peak-heavy bedroom-punk of Wavves, it’s been pretty much impossible to avoid. And while artful in their own right, the depth of the production on Women’s “Black Rice” almost makes the lo-fi aesthetics of the aforementioned other bands seem like cheap gimmicks. Recorded on “ghettoblasters and old tape machines” in Chad VanGaalen’s basement, there’s nothing about this track that feels remotely tacked on. You might believe this impressive murk of psychedelia was actually laid down in a garage back in ’67.

At once catchy and off-kilter, “Black Rice” coalesces elements of no-wave, psych-pop, and indie rock into a distinct and stunning anthem. As spacious minimalism and suffocating walls of sound collide, this brilliantly paced standout from Women’s impressive debut drives and drones in dreamy, drugged-out bliss, emphasizing negative space nearly as much as each guitar note, hand clap, vocal sway, or glockenspiel stab. Lead singer Patrick Flegel’s vocal work meanders and echoes across a swirling and swelling soundscape of percussive clatter and guitar jangle, detailing vaguely surrealist imagery with accents of falsetto and subtly hypnotic melodies. And as its last staggered fits of guitar strums resonate into the void, the song barely resolving at its close, it becomes quite apparent that “Black Rice” sounds sweetest marred and buried underneath its own production. – Derek Emery

Songs About Nothing: An Interview with Women