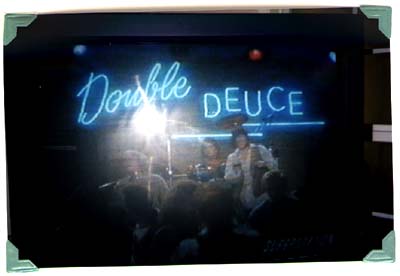 The greatness of a movie is often measured by how bad it is. Some say Plan 9 From Outer Space is the worst movie ever made. Others say Howard the Duck or Battlefield Earth. But the best bad movie I’ve ever seen is Road House.

At a friend’s crib a few weeks back, I was summoned to witness a DVD screening of the Patrick Swayze classic. We sat around joking while a team of experts (including a Circuit City employee) spent a good half-hour trying to get the audio from the DVD player to work.

And boy, he wasn’t kidding. From beginning to end, Road House is a non-stop thrill ride, as they say, of absurd fight scenes, gratuitous nudity and mind-numbingly moronic dialogue. In Road House, Patrick Swayze plays Dalton, a cooler at a hip New York club and a total badass. In one of the opening scenes, we see Dalton escorting someone out of the club after a violent conflict. Immediately afterward, he goes upstairs and sews up his wound. Yeah!

The movie is a classic good-versus-evil story that reflects upon the myth of the American hero. Dalton is a John Wayne type, an outsider. He has the instincts and rough edges of a savage, though he is brought in to protect civilization. Our pop culture has taught us to accept this sort of noble savage protagonist, as it is a common theme among every box office hit.

But most importantly, Dalton just beats people up and says stupid shit. In fact, my chums and I were talking about how someone should make a t-shirt with Dalton’s ten commandments on it. We only got as far as “pain don’t hurt,” “opinions vary” and “nobody wins in a fight.” But hey, those three are doozies.

As mentioned before, there’s a lot of unnecessary nudity in the flick. Every couple minutes a boob is flashed. One of the slutty girls with feathered bangs does a striptease for no apparent reason. There’s a “wet g-string” contest at some dive out of town. Swayze has sex with the hot town doctor. And some yokel juggles some girl’s boobies in the early phase of The Double Deuce’s reconstruction. But the naked body part featured most prominently in the film is Swayze’s heine. There doesn’t seem to be any reason to put Pat in a movie if he doesn’t get naked.

But all the exposed mammaries in this cinematic masterpiece only exist to mask the homoerotic subtexts. Despite naked male ass, the villainous millionaire character has lots of male companions, all of which have rippling muscles and exposed chests. The homoeroticism theory is solidified when one of said henchmen says to Dalton, “I fucked guys like you in prison.” Nice.

Sam Elliott also plays the role of a lifetime as Wade Garrett, Dalton’s mentor and ass-whooping old dude. When he visits the Double Deuce to lend Dalton a helping hand, he says, “the double douche.” That was an allusion to Citizen Kane, right?

I feel richer knowing that I’ve seen Road House. It’s a terrible movie. Ghastly even. Hell, it was made in a time that mullets were still acceptable as a hairstyle. But dammit, it’s a piece of film history that I will forever look fondly upon. Or at least I’ll know what to watch the next time I’m in the mood for a mindless film with lots of action and quotable quotes. And naked Swayze ass.

Actually, I’m not so sure about that last one…

The 90 Minute Guide: The Lost Soundtrack to ‘Ferris Bueller’s Day Off’