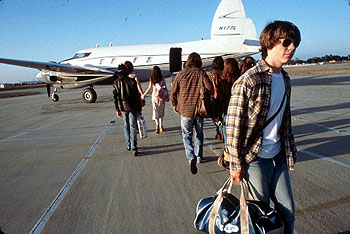 I’d venture to say that I’m not the only writer at Treble to share equal loves of music, movies and books. Sure, music is our main focus here at the site, and therefore will always be put first, but anyone growing up in the cultural landscape of the latter half of the last century will at least share a fondness of at least two of these media (books sadly being the one that will usually be left out). As such, I started to think about where these art forms intersect successfully. We can probably quite easily think of a handful of movies about writers of books, or about books in general, and equally think of books about movies, actors, Hollywood, etc. But, when music begins to intersect, we have a harder time thinking of the really good ones.

For this piece, I wanted to concentrate on film. I sought the best depictions of the music world on the big screen. But, that endeavor would still be too large. In what aspects of music on film was I interested?

First off, I figured I should rule out documentaries. That seemed too easy. When you’re simply capturing the music and its surroundings, you’re simply adding the visual element to the auditory. The same, in turn, must hold for concert films. This made me slightly sad as I would have to exclude films like I Am Trying To Break Your Heart, The Last Waltz, You’re Gonna Miss Me, Ziggy Stardust: The Motion Picture and 101, and that list could go on and on.

Secondly, I wanted to rule out musicals. That, in itself, is a tough category to define, so I am further clarifying by narrowing it down to films in which the characters break into song without the presence of the source of the actual music. Most musicals seem to tell stories through song without having any real commentary on the music itself. Defining musicals as such will let me slip in a few films that straddle the border of the genre.

Furthermore, I wasn’t just looking for films with great soundtracks. I could just enumerate all of John Hughes’ films and be done with it. These films had to have more.

Also, I surmised that I would have to eliminate the biopic. Though Walk the Line and Control are able to speak about modern music in a unique fashion, I’d like, for the most part, to avoid factual reconstructions of the life of one particular artist. I’m looking for films that somehow capture what we, as fans, feel about music. Not an easy feat.

I started to list all of the movies I had seen that I felt uniquely captured that spirit of music. That was my starting point. Along the way, I discovered that no film I’ve seen has really captured the essence of what it feels like to be in a band. They skirt the edges, in parody, and subplots, but none ever hit the nail on the head. I’ve decided to present my findings and reflections in chronological order of release:

One was the quintessential movie for the disco era, and one spun off of a comedy sketch show. These two films couldn’t be any more different, yet they both celebrated music in ways no other films were doing at the time. Sure, SNF was about a dancer, a lothario who was the picture of the stereotypical member of a subculture. In fact, the original point of the character came from English mods, as the author of the piece that eventually transformed into the film couldn’t make sense of the disco scene. But, the soundtrack that gelled around the film was huge, and not just the iconic songs from the Bee Gees; Yvonne Elliman’s “If I Can’t Have You” being one example. What SNF did was to capture the scene in a way few other movies had done for any ‘scenes’ before disco. The dance club moments became film history, energizing audiences, and legitimizing a genre. The Blues Brothers, on the other hand, took comedy, a love of Blues, R&B and Soul music, and created the very first SNL success story on film. It’s not a biopic, the band never really existed before the show. It’s not really a mockumentary, because they don’t trace the origins of the characters. Instead, the fictional brothers are sent on a ‘mission from God’ to get the band back together. Along the way, we’re treated to borderline ‘musical’ moments with Ray Charles, James Brown, Aretha Franklin and Cab Calloway. In the end, it’s a celebration of music, and its triumph over evil.

These two films come very close to what I was searching for: namely, the spirit of being in a band. Spinal Tap is a brilliant film; I don’t think anyone would question that. But, it’s a parody. Yes, it refers to several events that have hit very close to home to many rock bands, and thus it probably captures the heavy metal scene more accurately than any real life documentary. This is all not to mention the various swipes at several other genres in the fictional band’s history. Plus, it’s funnier than all get out, easily becoming one of my favorite comedy and / or music films of all time. Purple Rain is another one that defies convention. It’s not a biopic, per se, nor a documentary, nor a musical. At times it gets a little heavy handed, self-important and humorous, but it has done what no other music film I have seen has done, which is incorporate music into the plot of the film, as well as the emotional arc. It’s almost impossible not to get caught up in the swell of the title track, then exult with “Baby I’m a Star.” This film, to me, comes closest to the concept of being in a band, yet concentrating mostly on the singer / songwriter aspect, believing in his music when no one else seems to. The interplay with Wendy and Lisa, when he discovers their, ironically fictional, contribution is a key moment.

I debated putting this entry at the close of the article, out of chronological order, as it somehow encompasses everything this piece is about. Summed up, it has everything, but is overall a love letter to music itself. Each character displays his or her passion for music from a unique perspective. There’s the wide-eyed youth, the character of William Miller, based on Cameron Crowe himself, trying to express his passion through words. There’s Russell Hammond, the musician in a band on the brink of success, caught up in the lifestyle, while frequently confronted with the humilities of his choices in the people he affects. There’s Penny Lane, a “Band-Aide” who expresses her love with companionship and the act of being of a physical muse. The list can continue with Lester Bangs, William’s sister, Anita, and the characters who represent the corporate world, including the staff of Rolling Stone and band managers. Music is the main character of Almost Famous, and nearly every scene supports that claim.

This film is nearly the equal of Almost Famous, yet without the overt sentimentality. Rob Gordon could be seen as William Miller 15 to 20 years down the road, faced with the dilemma of what his life devoted to music really means. Though centered on Rob’s musings over relationships, as the book is, music plays a central role. I would argue that Rob is not trying to concentrate on the role relationships have played in his life, but instead trying to find out how to make a relationship fit in with his love of music. Rob’s hired hands, played brilliantly by Jack Black and Todd Louiso, are not merely sidekicks; they represent aspects of Rob’s personality, though he might be loath to admit such a thing. The scenes with the three of them are magical. I’ll admit, I’ve watched the movie before by skipping directly to scenes with them in it. Their discussions about music, their “Top 5s” and musical choices are glimpses into the minds of obsessives as we’ve never seen before. The book and film captured the personalities of these people as Empire Records, released five years prior, blatantly failed. And, as can only be penned by a true music lover, not only does love win out, but so does the obsession with music.

I know what you’re thinking: “Hey, that’s a biopic!” But, in the words of Tony Wilson, speaking into the camera, “This is not a film about me. I am not Prince Hamlet, nor was meant to be. I’m a minor character in my own story. This is a film about the music, and the people who made the music: Ian Curtis, Shaun Ryder, and Martin Hannett.” 24 Hour Party People, as made by Michael Winterbottom and Frank Cottrell Boyce, is quite possibly the most ingenious film ever written and directed about music. Postmodern, metafictional, and loaded with quick bits of ephemera for trainspotters, the film is a standout. One doesn’t have to love Joy Division, the Happy Mondays, or the Manchester scene to enjoy this film, but it helps. Aside from Spinal Tap, it’s the most quotable film of the bunch.

Outside of the television show, Supernatural, School of Rock is the biggest sloppy kiss to classic rock in the business. Jack Black, having already proven himself a lovable rock loser in High Fidelity, is pitch-perfect as Dewey Finn, a guy so in love with rock and roll that it pretty much impedes any chance at a ‘normal life.’ He’s kicked out of his band and nearly kicked out of the apartment he’s sharing with his friend when he seizes on a presented opportunity that turns his passion for rock into a real career. The magic of this film is all encapsulated in Black’s portrayal, his obvious childlike love of music, and his ability to instill that love into the kids he inspires.

None of these films quite get into the real feelings of being a member in a band. The characters of Russell Hammond, Jeff Beebe and “The Kid” come close, but not quite. In the end, that is a movie I am still waiting for. However, all of the above films do capture music in ways that no other film does. More recently, we have seen films that treat music as an accessory, as something to wear and take off as needed, i.e. hipsterism. One blatant example, though I like aspects of the movie, is Nick and Norah’s Infinite Playlist. Here is a film where the main character is supposedly in a band, yet the music is treated as window dressing. It would have been wise of the makers of this film to watch John Hughes’ movies, as he manages to accomplish the feat of making music a character without the plot having much to do with music at all. Then again, no one’s really been able to duplicate that feat since. Hopefully, the future has better things in store in terms of music and film, or at least the equals of the films above, and maybe, just maybe, one that really captures what’s it’s like to be part of rock and roll.

The National, The Weeknd on Hunger Games: Catching Fire soundtrack