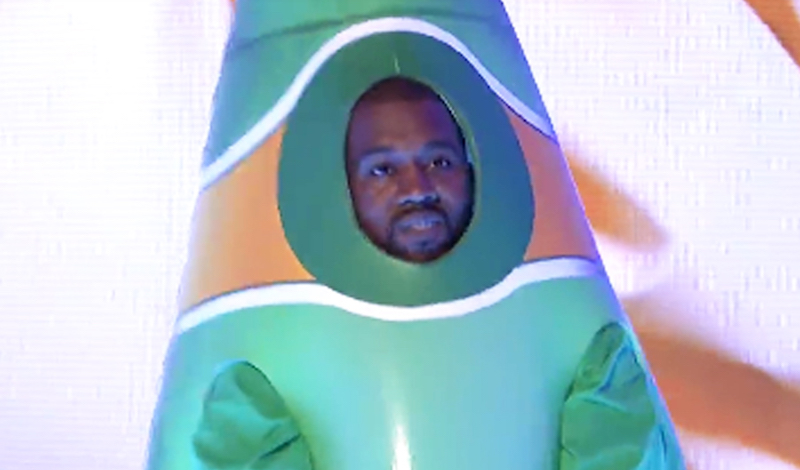 We’re about to get to the best music of the year. But first, here are the moments in 2018 that bummed us out.

We always knew Kanye West was a complex and self-contradictory figure. But I don’t think anyone saw his tendency toward idolatry dragging him in the direction of Donald Trump and Candace Owens. Eschewing medication for the bipolar disorder he finally acknowledged in public (but is now denying, attributing his erratic behavior to sleep deprivation), proclaiming that slavery was a choice, appearing on Saturday Night Live to perform dressed as a fucking soda bottle (or something) in truly pathetic fashion…typing these things makes me feel weary and full of rage. He’s created some of this year’s most execrable music: much, though not all, of his own ye, certain parts of Nas’s NASIR. And also some of its absolute best: Pusha’s DAYTONA, Teyana Taylor’s K.T.S.E., the incendiary Nas single “Cops Shot The Kid,” much of the Kid Cudi collaboration KIDS SEE GHOSTS. The irony of him producing an excellent song (“Infrared”) in which Pusha vows he “don’t tap dance for the crackers and sing ‘Mammy,’” then several months later going on SNL to dance idiotically and sing what might as well be “Mammy,” shouldn’t be lost on anyone, and it’s fucking miserable. – Liam Green

Obnoxious stunts are done in the name of capitalism pretty much all the time, but Target crossed a line earlier this year when the company recreated the facade of legendary New York club CBGB in its own branding. Instead of “CBGB” on the awning, however, it read “TRGT.” It didn’t go well; the company received its share of feedback from locals who were less than stoked on the retail store’s capitalization of New York punk iconography. Next thing you know they’ll be selling fake metal merch. Maybe next time Target puts up a fake storefront in New York, they could call it Famous Original Bullseye or something? – Jeff Terich

THIS! This honking thing! This “Baby Shark” for adults! This Vodka Bucket Challenge! This West Berlin Side Story dance-off, er, DANSOV! This Beyoncé-via-Kaiju train wreck has 79 million YouTube hits! This, seriously? This is what Russia wants to replace Pussy Riot with? This needs a hashtagged challenge? This is all it takes to out-Die Antwoord Die Antwoord? This bootleg sex-robot Electric Slide? This ploy by Putin? This, apparently. This vehicle for one single reference to horse cock. This pop pelmeni. This barking, croaking Casiotone for the painfully alone. This cheap fanfic that ships just the hair of both Guy Fieri and Giada De Laurentiis. This fucking millennial Macarena. – Adam Blyweiss

This year saw some weird celebrity couples, both good and bad. Michelle Williams and Phil Elverum: an unexpected but perfect match. Ariana Grande and Pete Davidson: head-scratch inducing but somehow sweet. But the most baffling of them all was Grimes and Elon Musk. Somehow, synth-pop pixie Grimes, once a self-identified socialist, began dating a man who shut down employees’ attempts to unionize (oh yeah, and Grimes defended him on that too). Then there was the bizarre mess with Azealia Banks, who had apparently just been wandering around Musk’s house for weeks waiting on Grimes? Clearly, the simulation is trying to wake us up. This is too weird to be real life. Right? Right? – Ben Cohn

Awards shows are rarely anything to get too worked up over, and the Grammys have always had a spotty record when it comes to recognizing music that achieved something other than pop chart ubiquity. But this year seemed especially tone deaf considering the Album of the Year went to Bruno Mars, a totally likable and entertaining but nonetheless safe/non-controversial artist, instead of Kendrick Lamar or Jay-Z, who each delivered some of their most poignant records in 2017, or Lorde or Childish Gambino, who achieved a kind of next-level status with their nominated albums. That these four artists were in consideration at least suggests that the Grammy judges aren’t totally deaf. But in an age when high-calorie, low-nutrient music just doesn’t cut it anymore, that’s sadly exactly what took home the statuette.  – Jeff Terich

Poor Rita Ora. Before “Girls,” she might’ve been most famous in the States for asking for 100,000 Retweets to promote a new song and getting just 2,000 (and then saying she got hacked). And now she might be most famous for this complete and utter misfire. Nothing about this song works, and what’s crazy about that is that so many parts of this song should work. It’s got a pretty great guest cast! It’s got co-writers who worked on “Havana” and “Let Me Love You” and “Freedom” (the Beyoncé one (!))! And yet everything about this song is a motherfucking disaster. The central conceit is nice, at least in theory: Let’s make a song for girls who like girls! Except then Rita Ora and company decided to frame WLW as a “sometimes” thing and to talk about drinking “red wine” to kiss girls, provoking (rightful) anger from all angles. And there are so many weird things about the lyric here: Charli XCX, God bless her, cannot sell the phrase “kush lovin’” on the pre-chorus; Bebe Rexha does a whole weird predator-prey thing; and Cardi B sees fit to mention scissoring for some godforsaken reason. Really, nothing illustrates how strange this whole affair is better than the music video. Every star appears on a completely different set: Rita in some kind of girl-based garden of Eden, Bebe in an electrical grid, Charli on what looks like a playground? Cardi doesn’t even appear in person—she just shows up in the sky like goddamn Marlon Brando in Superman. This song is so top-to-bottom misguided. Who let this happen? This shouldn’t’ve happened. – Ben Dickerson

Surprisingly, Mark Kozelek wasn’t that much of an asshole this year. He released two albums, one of which included a song lavishing praise on Ariel Pink, which is still a little bit asshole-ish. But he didn’t call any female journalists bitches, he didn’t get into any feuds with other one man indie bands, and he didn’t call an audience “fucking hillbillies.” So here’s to you, Mark Kozelek, growing up at the tender age of 51! You deserve a drink, or some kind of award. How does the “angry, bitter indie middle-aged indie guy gets slightly less angry and bitter” award sound? Or maybe the “grown man begins to act like it” award? Well, save for the second album full of nostalgia for the sexual exploits of his younger years—those were the days, we’re sure, but no need to go into the details. Anyway, your choice, Mark. Your choice. – Ben Cohn

The NRSC vs. Jason Isbell and Ben Folds

This was an election year, and one that turned out significantly better than 2016 (though there’s still a long way to go everyone, don’t get too comfortable just yet). And of course that meant acts of political desperation, including demonizing a couple of musicians. Singer/songwriters Jason Isbell and Ben Folds both endorsed Tennessee Democratic Senate candidate Phil Bredesen (who also earned the endorsement of Taylor Swift), and played a benefit concert for him. But before they even had the chance to play a single note, the National Republican Senatorial Committee sent out a press release criticizing the two musicians and referring to them as part of the “unhinged left.” Obnoxious as it was, Isbell wore the label with pride, tweeting, “2 Unhinged 2 Quit.” Hope that one makes it on the next album. – Jeff Terich

Not for much longer…me nor my people would ever be at or around one of those tragic rallies, so thanks for the heads up philip! https://t.co/dRgRi06GrJ

While we’re on the subject of election-year embarrassments, elected officials somehow keep failing to learn the lessons of the past. Donald Trump, who hasn’t stopped campaigning since winning the presidency by the narrowest of margins, has been featuring music by artists who—surprise, surprise—don’t want their music played at Trump rallies! Those artists include Pharrell, Rihanna, and the estate of the late Prince. Rihanna referred to the events as “tragic rallies,” but it was Pharrell’s attorney, Howard King, who delivered the most stinging response: “On the day of the mass murder of 11 human beings at the hands of a deranged ‘nationalist,’ you played his song ‘Happy’ to a crowd at a political event in Indiana,” he said in a cease and desist letter. “There was nothing ‘happy’ about the tragedy inflicted upon our country on Saturday and no permission was granted for your use of this song for this purpose.” Damn. Go get ’em. – Jeff Terich