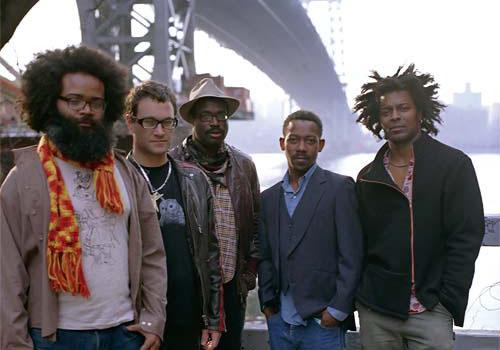 If you look carefully enough, you may begin to find patterns in each year’s best songs, like crystals forming in a pond in winter. Look back to 2004, and you’ll hear social uproar over a treacherous political climate. Move forward to 2005, and you’ll notice an emphasis on the dramatic, be it true to life tales or just intense fictions. And in 2006, the best that our favorite artists have had to offer seem to revolve around some very simple concepts—love, sex and death. Skateboarding romance, parenthetical lovers, revenge, funerals, knives, assassinations, even a case involving being with the offspring of an executioner. Now, this may not necessarily cover all the bases involved in 2006’s best songs. And frankly, we enjoy a bit of diversity in our songs. Overall, we voted for more than 500 songs, total, between the two dozen of us writers. But we had to narrow it down to 50, and so we did. And while we don’t proclaim these choices to be carved into stone and called out from a hillside to the masses, we do think they’re pretty rad.

Of all the songs I heard this year, here is the most cinematic. It draws one into an infinite theatre of imagined scenes, always black and white, always melancholic. Under Byen, never afraid to lead the listener into unexpected territory, succeeds here in creating a massive landscape of shifting atmospheres, of contractions and dilations. What is forceful and assertive in their music meets what is meditative. They effectively conjure both a surface world, of things and actions, as well as something more subterranean—the subtle flux of uneasy emotion. “DHSHOAFDBUAD” is like a drama of human life in miniature, at its most robust, grandest magnitudes. Conceived from dangerously exalted ambition, it is rendered masterfully by a band at home in its densely complex and singular vision. – Tyler Parks

The outback rocks. From Mad Max to Steve Irwin (rest his soul), the land down under has given us much to be thankful for. Wolfmother is another succulent fruit of her bounty, with big hair and even bigger riffs. “Woman” is a straight up rockin’ song, showcasing immense talent and energy with an Aussie twist. Furthermore, these boys have done their homework, giving nods to the annals of classic rock. Towards the middle they go into a séance, channeling the spirit of The Doors and taking us on a heavy trip. And don’t think they loose that energy live, because that intensity becomes even more amplified. – Dean Steckel

“Louisiana”
by The Walkmen
from A Hundred Miles Off

The opening track of The Walkmen’s A Hundred Miles Off provides a most accurate and splendid introduction to the album itself. The song is an easygoing portrait of a Louisiana day as a desired location to “kick it in the sunrise” and “think about a dream,” especially when you have your hands full, as singer Hamilton Leithauser so heartily croons. The song, like the album, is light-hearted with a touch of pessimism, making it an ultimate example of the album’s accessibility. The horn section is robust and paired perfectly with the quintessential piano, seamlessly concluding Leithauser’s vocals with lovely, mariachi-tinged melody. And while listening to the album in its entirety unwittingly makes me categorize his vocals as just a bit monolithic, “Louisiana” finds Leithauser’s vocal tendencies perfectly accentuated, allowing the listener to fully appreciate his brawny and passionate drones. – Anna Gazdowicz
Listen Here

“Rubies”
by Destroyer
from Destroyer’s Rubies

Dan Bejar doesn’t so much write songs as he does musical essays. In fact, sometimes I feel as if I need a companion piece written by a college professor from Vancouver to get every reference and play of words, much like you get with Thomas Pynchon’s novels. This is easily the case with “Rubies,” the ten minute opening title track of Bejar’s latest album as Destroyer. I use the last qualifier as he’s also just released an album with Spencer Krug and Carey Mercer as Swan Lake. “Rubies” is feast for the ears of every Bejar fan. It combines aspects of every single one of his previous albums, blending them into one hyper-literate, self-referential yet surprisingly accessible song. This opening salvo from one of the best albums of the year is ostensibly about the American popular music scene as he dismisses the industry and its critics alike while referencing both Your Blues and This Night as well as “Proud Mary” and “Dock of the Bay.” In a way, as Bejar has often been compared to Bowie, one of his heroes, this is Bejar’s “Young Americans.” Bejar’s tune takes a crack at American soul in words while Bowie’s takes it on in sound, and while Bejar namechecks himself and a few oddments of other songs, Bowie lifts from the Beatles. I suppose the only difference is that Bowie was embracing American music, except for his nearly trademarked indictment, “ain’t there one damn song that can make me…break down and cry.” The majesty of “Rubies” just might do that, Mr. Bowie, but then again, he’s Canadian. – Terrance Terich

Neko Case has done what few musicians are able to accomplish in the course of their career—become exponentially better with each release. Everyone’s favorite fiery-haired alt-country diva (sorry Jenny Lewis, you come in at a close second) has even expanded her songwriting repertoire to encompass themes touching on the inevitable downfall of society on the title track from her excellent album Fox Confessor Brings The Flood. Chilling reverb unearths a somber ambiance, echoing alongside Neko’s trademark tenor guitar strums. Newfound darker lyrical content surfaces in the first couplet: “Driving home I see the flooded fields/ how can people not know what beauty this is/ I’ve taken it for granted my whole life/ since the day I was born.” As the reverb pulls the listener further into the ether, Case delivers one of the most profound, and for that matter, timely statements of the year with “It’s not for you to know/ but for you to weep and wonder/ when the death of your civilization precedes you.” She seems to revel in her prophetic revelations, and with a vocal range that magnificent, who can blame her? – Mars Simpson

“Parentheses”
by The Blow
from Paper Television

Infatuation, heartbreak and sex are well covered in the realm of pop music. Hell, we made an entire feature out of these three topics, choosing only 50 songs out of millions to do so. But the song that deals with an existing relationship, its intricacies and its private bittersweetness is a rare thing, indeed. The Blow’s “Parentheses” is the most realistic portrayal of the everyday connection between two hearts, possibly ever. Set to a “My Boyfriend’s Back” gone electro melody, “Parentheses” finds those everyday moments and subtly romanticizes them, from the warm and fuzzy (“When you’re holding me/we make a pair of parentheses“) to the vulnerable (“If something in the deli aisle makes you cry/I’ll put my arm around you and I’ll walk you outside“). Somehow, by the end of the song, it’s gone from light and fun to soaring and powerful. You’ll be bouncing around with your headphones on, but not without a lump in your throat. – Jeff Terich

Goldfrapp songs are undoubtedly sexy, but nothing prepared listeners for the ferociousness of “Ooh La La.” The song throbs with a Canned Heat beat and recalls the heyday of Glam Rock and the icy sleekness of Eurodisco. Listening to “Ooh La La” is like hearing a really great dance remix, but that’s just the trick; it’s not a remix! I would be hard-pressed to imagine any DJ try to make this song more danceable than it already is. It’s almost as if Alison Goldfrapp and Will Gregory just triple-dog-dared them to make it better. – Jackie Im

It’s been a good year for coke rap, quirky costumes and cerebral prog hip-hop. Not so much for the big names. But that young buck from that Kanye single last year turned out some of the most joyful and most classic hip-hop tracks of the year. The best of them, “Kick, Push,” combines a steady, simple beat with cinematic string and horn samples, turning out a laid back but danceable treat. Of course, Fiasco’s lyrics are what make it unique, telling of a skateboard romance, that being both with the board and a kick-flipping lady. “I would marry you,” he quips, “but I’m already engaged to these aerials and varials.” Lovers intertwined with no place to go, they’re inevitably met with the disapproving “I’m sorry young man, but there’s no skatin’ here.” Even in defeat, Fiasco is victorious. – Jeff Terich

“Long Time”
by The Roots
from Game Theory

We weren’t fifty cents away from a quarter where I come from. I can actually recall long hours at a liquor store playing Street Fighter II and the quarters flowed pretty amply. Even still, I can understand the sentiments in The Roots’ “Long Time” in the same way I can get Stevie Wonder’s “I Wish” or even, so help me, John Mellencamp’s “Small Town.” Black Thought’s recollections of Philadelphia play out over ?uestlove’s slinky beat, the song enhanced by a string section and a muted guitar lick. As Black Thought and Peedi Peedi trade musings on how they didn’t go under in the ghetto, they both admit that their city will always be a part of them. Yeah, it may sound cliché, but they manage to do it in an honest way rather than sounding like they’re out fishing for street cred. You can’t help but see the streets of your own home town when you hear somber, nostalgic strings of “Long Time,” like you’re at an old haunt looking out across the street at other familiar places. It may not be Philly, it may not have that soul, but you know that wherever you go you’ll forever represent it. – Hubert Vigilla

You could call it whimsy at your peril. After the opiate contentment of Strangers, “Visit from the Dead Dog” marked a return to the surrealist bent of Here Be Monsters. This was a Riefenstahl referencing, religion morphing, Tim Burton worthy homage to living afterthought. As he enters establishment, Ed is showing no signs of playing for safety. “Visit” is another implausibly brilliant smash hit that never was. I spent a couple of weeks in late June wondering around Riga and Helsinki in the light at 11pm with this on, and it felt perfect in the circumstances. – Tom Lee