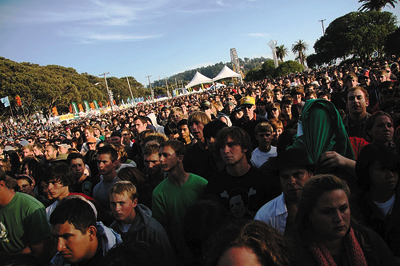 Just over a week ago, music fans gathered in the hot, dusty Empire Polo Fields in the Coachella Valley to check out artists like The Cure, Morrissey, Paul McCartney, My Bloody Valentine and The Killers. And some got tased for not wearing their wizard costumes. Anyway…with Coachella having rung the starting bell, summer festival season is officially here. Sure, it’s still only spring, but in the right place, the weather will most certainly resemble that of the summer months. And June isn’t as far away as you might think.

The unofficial start of summer, however, is Memorial Day, marking the beginning of grilling season and the Sasquatch Festival in Washington. From there (and actually a little earlier!), music festivals around the country will be happening well into the beginning of Autumn, and even beyond. We’ve assembled information on several of the biggest music festivals around the country, spanning from West Coast to East Coast, and happening between May and September. Here’s all the info you’ll need.

Pros: Lots of unique artists, definitely unlike any other festival, and probably the only event of its kind where you’ll see a group like Blank Dogs
Cons: It takes place in small venues, so chances are the tickets won’t be in enormous supply, and many acts are relatively unknown outside of New York, that said the lineup is pretty solid, you can trust us.

Pros: Like The Deli Best of NYC, it’s an intimate series of shows without the overwhelming corporate logos and crowds swallowing city blocks or remote campgrounds, plus lots of great pop acts, many of them Swedish!
Cons: It’s almost so indie it hurts, but there’s definitely bands worth seeing, regardless.

Where: The Gorge, George, Washington

Pros: Sasquatch has a pretty kickass lineup, as always, so that’s plenty of reason to check it out, and tickets are more than reasonable. Plus, you can arrange to have deluxe, private campsites, so you can make a fun weekend of it.
Cons: My brother will tell you that, should the weather happen to turn bad, you run the risk of having your tent blow over, which kinda sucks. It’s also not in a major metropolitan area, so make sure you’ve got enough gas to get there.

Pros: It’s just one day, with two stages, so there’s very little chance you’ll miss who you want to see; You probably will want to see all of the headlining acts with the exception of…
Cons: Asher Roth.

Noise For the Needy
NoisefortheNeedy.org

Cost: varies from show to show

Pros: Benefits charity, lots of small shows, plenty of great new bands to explore.
Cons: You know what? When it’s a charity show, and there’s bands you want to see, there is no con.

Pros: It will be vastly different than any other festival (save for maybe another bluegrass festival) and you get to see the likes of Jenny Lewis and David Byrne between fiddlin’, banjo pluckin’ bluegrass bands, which is pretty cool.
Cons: More hippies, you could get really tired of hearing bluegrass, and you’re kinda way out in the middle of nowhere in Colorado, but we suppose that’s no worse than being in the middle of nowhere in the desert in California.

Pros: The event lasts for nearly two weeks, so even if you miss one night, there may be another that catches your interest; diversity, lack of pretension.
Cons: With lack of pretension comes a plethora of bands you probably don’t want to see, but plenty more are to be announced, so don’t assume it’s all The Fray and Kid Rock just yet.

Pros: One of the best parts of Pitchfork Festival is that all of its Friday night acts are strictly playing audience requests (go to the Web site to put in your votes), so you’re guaranteed (almost anyhow) to hear what you want. That and the lineup is fairly different from several other festivals going on, so you’re bound not to have a repeat of, say, Lollapalooza.
Cons: It’s going to be hot. There’s no way around that. Also, some of the quieter, twee acts may seem out of place on a big stage, but we’ll give them the benefit of the doubt.

Pros: better hip-hop lineup than a lot of other festivals, lack of truly appallingly bad artists, My Bloody Valentine, Echo & The Bunnymen.
Cons: Like most other summer fests, you’ll probably sweat out half your body weight, and you might not be able to see Kevin Shields as close as you like.

Pros: Depeche Mode and Lou Reed are pretty damn good reasons for going, particularly because they’re not playing a lot of the other big festivals; you can get a private luxury cabana for 20-45 of your closest friends, with personal servers and bar service. That’s pretty amazing.
Cons: Barack Obama most likely won’t be there; the heat will be pretty nasty; the lineup is good, but awfully familiar; Asher Roth (again).

Pros: San Francisco is a beautiful city, so there’s probably no better place to hang out for the week if you’re making a trip out of it; lineup is impressive and different enough that you have a good chance of not repeating any other summer festival experiences; Os Mutantes! Tom Jones!
Cons: The number of artists to avoid is unusually high, that said, it probably shouldn’t be that hard to do.

Pros: All Tomorrow’s Parties is always a unique experience, and this should prove to be no exception. The performances are held in intimate venues, so you get more of a club atmosphere than that of a giant festival ground, and with bands like Feelies and Suicide performing classic albums in their entirety, it could end up being a once-in-a-lifetime event. Plus, the lineup in and of itself is pretty amazing. Furthermore, it’s being held next to a resort, so lodging is on site (more or less), in addition to restaurants and bars, so all you need is essentially in one place.
Cons: It’s in upstate New York, away from major cities, so getting there is a bit of a hassle. And the hotel rooms come only in 3 night blocks, so the smallest amount you pay will be $450. In the long run, that’s not a bad deal, but if you’re only planning on going for one or two days, you might need to sort out a crash situation with other festival goers.

As of the time of this article, lineups had not yet been announced for Street Scene, Siren Fest, Monolith, Sunset Junction, Voodoo, Treasure Island, Pygmalion and Austin City Limits, but we will, of course, post information as it becomes available.