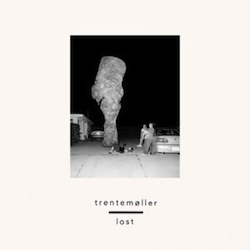 For the better part of the last decade, Danish-bred electronic musician Trentemøller has been creating a sound that defies convention, throwing a middle finger in the face of electronic music stereotypes. After producing a number of dance floor friendly singles, Trentemøller released his debut full-length in 2006 and the results were staggering. The music on The Last Resort was too concerned with atmosphere to be considered “dance” music, yet the material often featured a good beat or groove that prevented it from definitively being ambient. Since then, Trentemøller has continued to expand the boundaries of his unique sound, and his new album Lost is no exception.

From the very outset of Lost, it’s clear that the album is on a different path than its predecessors. Of its 12 tracks, seven of them feature guest musicians, with varying degrees of success. Lost starts off with the harrowing “The Dream” which sees Trentemøller team up with indie rock veterans Low. The two acts, as disparate as they may seem, combine their talents incredibly well and create a sound that is fresh for either group. Likewise, “River of Life” which brings Trentemøller together with Brooklyn-based act Ghost Society is a five-minute blast of skittering electro-rock that may be the most unexpected yet pleasing cut on the entire record. “Come Undone” which features vocal duties handled by Kazu Makino of Blonde Redhead, is a sultry downtempo affair that bears a surprising urgency.

That being said, not all of these vocal collaborations hit the mark. The Raveonettes-assisted “Deceive” is enjoyable, but its dreamy atmospherics and vocals combined with the driving four-on-the-floor beat feels at odds with the other tracks. Similarly, “Never Stop Running” sees Jonny Pierce of The Drums channel his best Sting impression over sparse backing instrumentation. While it’s an entertaining listen, “Never Stop Running” doesn’t easily slot into Lost as a whole, leaving it feeling disjointed from the rest of the record.

As pleasing as the collaborative work on Lost is, the album really shines when Trentemøller takes the reins on his own accord. Like his past records, it is an exceedingly difficult task to predict which direction he will take. For example, “Still on Fire” is a propulsive dance track that has enough breaks throughout to keep the dance floor packed and moving. “Constantinople” largely follows the same format, yet it adds eastern-influenced flourishes and traditional instrumentation that allows the track to sound as big as the massive city for which it’s named. “Morphine” sees Trentemøler dive into his more experimental side, and album closer “Hazed” is an extensive soundscape that slowly builds before finishing with a frenetic wall of feedback.

After listening to Lost all the way through a couple of times, one thing becomes exceedingly clear — Trentemøller clearly doesn’t give a damn what you think. Lost is the sound of an artist doing things the way he wants to, without buckling to commercial pressures or stereotypes of the genre in which he’s set up shop. By teaming up with indie rock artists and blurring the lines between dance and ambient music, Trentemøller has created yet another fascinating vessel for confounding expectations.