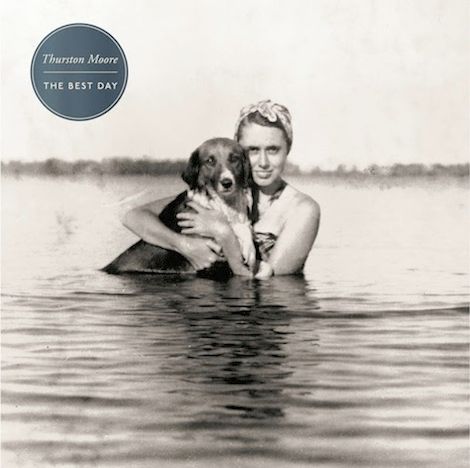 Two extended benedictions open Thurston Moore’s fourth solo album and threaten to outweigh the six songs that follow them. The press sheet from Matador compares the first one to “Crazy Horse,” and that’s inaccurate only in that they both sound exactly like somewhat more medicated outtakes from Ragged Glory, without the epochal power chords. It’s my personal experience that rock musicians of Moore’s stripe generally put off incorporating prayer into their work until there’s absolutely nothing left for them to do and a package casino tour is out of the question. Speaking as a resolute heathen whose condition is not slated to change anytime soon, the first two cuts from The Best Day strike me as extended appeals one might confuse with prayer, and they take up the first 20 minutes of the record. But for all their studied repetition, compliant and mantra-like evenness, those two songs teem with a generosity that the cynicism of Moore’s generation overlooks in every-day practice.

And they work. “Speak to the Wild” is a sentiment of support for those encased in the uncertain morass of inequity, a parting (or at least fourth-quarter) wish for those not felled by discouragement to embrace the certainty of their convictions within the fear of the unknown: “Don’t let the dark get you lost / Your free will has come in fire and frost.” “Forevermore” is even more bracing, as Moore unveils an astonishing portrait of love and beauty that crosses a multitude of philosophical lines: “Animals, they sing and dance / Intuitions flash before you / Born to kiss the line and soul face / Is happiness the throne of your grace?”

In each of those songs Moore’s voice is mixed down, muted but not shut up by the locked-in, straight-ahead push of bassist Deb Googe of My Bloody Valentine, guitarist James Sedwards and Moore’s cohort in Sonic Youth, drummer Steve Shelley. There’s nothing surprising about the approach at all, except that they represent how wholly Moore’s approach to poetic composition can consume the listener when executed with grace and space. They’re as honest and pure as he’s ever been; whether that runs afoul of your notions of who Sonic Youth was and the attitude they conferred, I don’t know, and probably wouldn’t argue with you no matter if they did or not.

The rest of The Best Day — songs that are halved in both elapsed time and meditation — almost gets swallowed up before it starts, but winds up just as satisfying, if not as eye-opening. Moore’s music succeeds in establishing his purpose more than his lyrics do, but that’s always been the point (and why a lot of Sonic Youth’s most beloved work still eludes a good portion of even more adventurous listeners — present company occasionally included).

If you take nothing else from The Best Day, you might at least come to understand how nobody gets as much poetic mileage from eighth-note guitar strums more than Moore. Adhering to rock’s most basic rhythm while finding how many overtones and intimacies it can convey remains his most serviceable talent, whether electrified or otherwise. The wistful “Tape” recalls R.E.M.’s “Drive” in its tempo and fashion, but above it all is Moore’s unwavering pulse on acoustic guitar, as he sings about aesthetics as if they’re recollections: “Mixtape cassette / Ego in love… One more track / Listen to this ‘til I come back / Side B remember me / I missed you.” The instrumental “Grace Lake” pulls from the gentle strains of the Byrds’ 12-string lines, gently rising with major-chord harmonies with scant notice, until you realize you’re in the middle of a build that crashes and resolves into an extended, ungraceful drone. (Of course there’s going to be a drone somewhere on this record.)

There are two (2) moments that, I’m a little surprised to note, directly recall Led Zeppelin’s Houses of the Holy period. Moore has never played into classic rock convention more than on the title track, quoting both Zep’s mythic, mandolin-driven folk and Jimmy Page’s uncut, straight-ahead guitar solo. The lyric’s about a self-assured man who wants answers: “He’s gonna wanna know the dirty truth/Oh yeah, what’s revealed in the end.” “Vocabularies” borrows from Zep’s phrase book as well, but for opposite effect: to hasten the transference of the worn-out-slacks patriarchy into a more challenging but freeing sense of divergent self-identification. “Boys they had, they had their say/And that was, that was yesterday.” If there’s anything disingenuous about that statement, at least you want to cut him a break.

Lopsided as it may be, The Best Day might be a solid entry point for the discerning millennial who wants to get basic training on Moore’s specific set of skills — then, of course, has the ambition to go backwards to see just how far those skills could extend themselves. For the rest of Moore’s admirers (and, I suppose, detractors of recent vintage), it’s a more basic, uncluttered and easy-going affair, one that involves less investment after its first 20 minutes to get its goods. But Moore’s projects have always been measures of audience investment at heart: Sometimes the best ideas are the ones we have to work a little harder for.

Stephen Malkmus and the Jicks – Wig Out at Jagbags