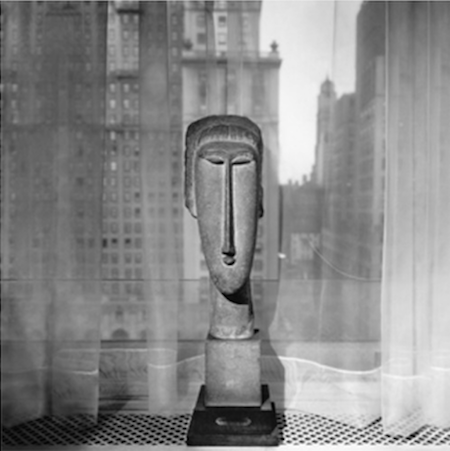 Andy Stott is just a few months from hitting the 10-year anniversary of his first minimal techno EP, Replace, but he’s traveled what seems like light years since then. His early, more club-centric compositions were some of Modern Love‘s first tracks, but they had more in common with the minimal techno of Kompakt — pulsing, bleeping bits of hypnotic laptop euphoria. Tracks like “Replace” carried their own subtle beauty, but a more conventional one. It was arguably only when Stott began to dig deeper into what he described in a recent interview as the “dark, aggressive nature of tracks” that he began to transition from an interesting artist to one with a truly compelling vision. His raw and distorted 2011 EPs Passed Me By and We Stay Together were important turning points in this metamorphosis, and the darkly ethereal Luxury Problems its transcendent climax.

Faith In Strangers, Andy Stott’s third full-length and first recorded in an analog studio space, doesn’t so much feel like the completion of that metamorphosis cycle as it does a kind of subtle rebirth. The nine-track album follows a similar pursuit as its predecessor, marrying dark and ominous electronic production to lighter human elements, primarily the ghostly vocals of Alison Skidmore. The thing is, it doesn’t really sound all that much like Luxury Problems, as much as it might seem to share a stylistic kinship on paper. Everything is more intense and saturated on Faith In Strangers — the distortion is harsher and coated in a thicker, viscous layer of grease, while the spaces in between feel more unsettling and unsafe. Stott’s been doing ominous and eerie long enough that it’s second nature; here, he’s added a surprising layer of suspense.

In stretching his boundaries so much wider on Faith In Strangers, Stott takes a knowing risk in delivering an album that feels a bit less immediately cohesive than its predecessor. There are pieces that, indeed, sound like they could have come from the same sessions as Luxury Problems, like the warmly chaotic “How It Was,” or the haunted ambient dub of “On Oath.” Stott’s journey takes more jarring turns here, however, most of which lead to some of the album’s most exciting developments. The structure of the album is such that Stott alternates between melodic song structures and more visceral exercises in beats and drones; the slow build of “Science and Industry” is followed by the static-covered space jungle of “No Surrender,” for instance, while the dystopian dubstep of “How It Was” gets tailed by the cannon-fire beatscape of “Damage.” It’s never so cut and dry, however, even if a pattern does seem to emerge; Stott would never be so accommodating to his listeners’ sense of security.

The push and pull that takes place in the sequencing of Faith In Strangers is part of its thrill — every highlight is given its exclamation point or ellipsis. And as highlights go, while Faith In Strangers might be a step backward in terms of cohesion, it feels richer in standout tracks than any of Stott’s previous releases. “Violence,” released a few months before the album, is a compact summary of Andy Stott’s complementary and conflicting aesthetics. It’s hushed and gentle at times, menacing and loud at others, all with Skidmore delivering a strange and disquieting emotionless chant. “Science and Industry” is more heavily guided by its beats — and samples of a grinding factory wheel — but it stuns in slow movements, with bassy synths oozing in over a stoic bassline. The title track, however, is ostensibly a post-punk song, with gorgeously gauzy keyboards washing over Stott’s Cure-inspired bassline.

“Faith In Strangers” is the penultimate track on the album, and offers a fascinating hindsight into the seven tracks that precede it. In as much as Faith In Strangers is an album built around Andy Stott’s most extreme diversions into tweaked electronic ephemera, it’s also the one that contains his most fully realized pop songs. That doesn’t mean it’s a pop album, per se; that would be too easy. Stott’s the kind of producer that makes the listener work a little bit before finding the beauty or comfort in his tracks. Once you’re there, however, finding your way out doesn’t seem like an option worth pursuing.