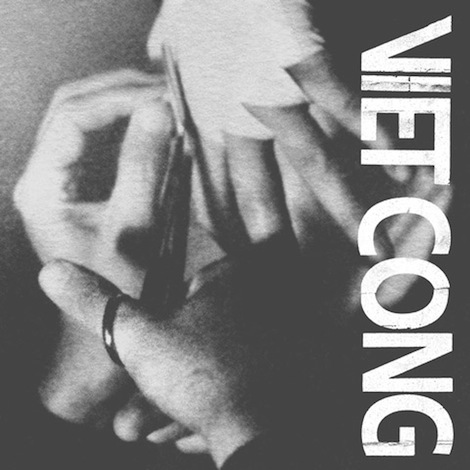 Calgary’s Viet Cong began much like any other fledgling band. Three quarters of the group were playing in a Black Sabbath cover band, started tinkering with some new songs in a practice space, self-released a lo-fi cassette (featuring a Bauhaus cover), and then took their songs on the road in an economy sedan, sometimes playing to an audience of one. To hear this, it’d be easy to surmise that the quartet is much like any other hungry young band with nothing to lose. Viet Cong’s history goes deeper than that; guitarist Monty Munro previously played in Lab Coast, and singer/bassist Matt Flegel and drummer Mike Wallace performed in Women — a band whose potential was cut short after an onstage fight between Flegel and his brother Patrick brought the band to a screeching halt.

For all of the ground-up dues-paying that Viet Cong participated in during the last two years, the band’s Jagjaguwar-released debut albums feels more than earned, and miles beyond the average debut. The shape and sound of the album has some antecedents in Public Strain, Flegel and Wallace’s second and final album with Women, mostly in its reverb-heavy abrasion and guitar tones. But Viet Cong use their alien post-punk aesthetics for more ambitious and more accessible aims; where Women sometimes felt like an art piece with catchy choruses, Viet Cong fashion pop songs out of peculiar shapes and textures. Perhaps it might not seem so apparent on first listen, but Viet Cong is a rock ‘n’ roll album, and a damn good one at that.

It might take a while before the rock ‘n’ roll part really surfaces; opening track “Newspaper Spoons” is all rumbling drums, This Heat-style chants and Vangelis synths set against guitar feedback. It’s practically no wave — until that sci-fi synth arrives, at which point it takes shape and resembles something more approachable and more beautiful. This ultimately turns out to be a handy trick in Viet Cong’s arsenal — holding fast to restraint only to make the payoff all the more satisfying. A similar thing happens in “March of Restraint,” in which a perpetual machine made of tapping guitar-riff claws gains its soul and ascends into a final two minutes of melodic transcendence.

Much like the structure of the songs, however, this is an album that builds up more steam as it goes along, and in its second half, there’s no stopping it. “Continental Shelf” is the band at their most thrilling, nimbly transitioning between noise-rock, shoegaze, surf-rock and pop against one of the best uses of the “Be My Baby” beat in recent memory. And “Silhouettes,” for all its jerky krautrock and Josef K influence, is one of the most straightforward moments on record, particularly when a spare sliver of synthesizer cuts through the wiry mesh of guitars with just the slightest dose of warmth.

As much exploration and fun Viet Cong seem to be having throughout the record, Flegel’s lyrics often lean toward bleaker or more sinister themes. In fact, death hangs heavy over the album; on “Pointless Experience” he muses, “If we’re lucky we’ll get old and die.” Similarly, “Continental Shelf” opens with the realization, “When all is said and done, you’ll be around until you’re gone.” And the breathtaking, 11-minute album closer is simply titled “Death.” It’s probably no coincidence that the band was formed after the death of Flegel’s friend and former bandmate Chris Reimer, sending a bit of a shock to the system to make good on a musical pursuit. And yet, despite all the grim reminders, Viet Cong’s music sounds remarkably vital. There’s nothing like the darkness on the horizon to truly appreciate the feeling of being alive.