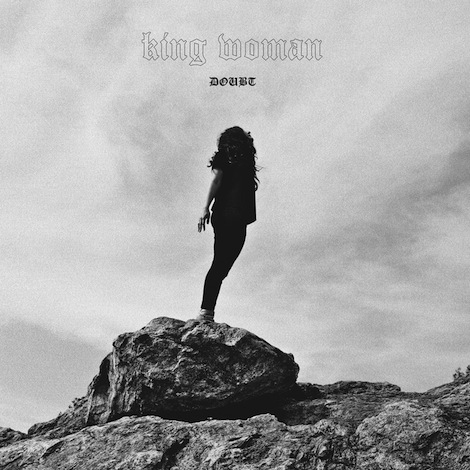 Since at least a decade ago, there’s been a debate stewing over just how many elements of dream pop and shoegaze one can add to a metal album before it ceases to be a metal album. Suggesting that there’s a correct answer to that is akin to trying to definitively determine the sound of one hand clapping. But on a wider scale, the willingness of many modern metal bands to let go of expected, traditional tropes speaks to just how much metal has changed in the last decade, and how much it likely will continue to do so. Born of the same San Francisco scene, King Woman — fronted by Kristina Esfandiari, formerly of Whirr (a band ties to Deafheaven, another noted mixer of metal and shoegaze) — likewise has the sounds of shoegaze and dream pop in its DNA. The “Mazzy Star plus Black Sabbath” equation has been mentioned more than once in the press cycle leading up to the release of their debut EP, Doubt. But there’s no mistaking just how heavy this music actually is.

Some of that heaviness comes directly from the subject matter of the album. Esfandiari grew up in a fundamentalist Christian environment, and the title of the four-song EP, Doubt, is directly reflective of her own reflections and personal discovery. It’s not the sole concept behind the songs on the record, but whether she’s entwined in questions of love, life or her own crisis of faith, Esfandiari tackles them with passion and soul, her powerful vocals landing with the impact of Chelsea Wolfe at her most mournful, or PJ Harvey at her bluesiest. And that’s not a comparison I make lightly — Esfandiari has one hell of a set of pipes on her.

It takes a hell of a set of pipes to match the mighty strength of the arrangements behind them, however, and whether or not these are actually metal songs — primarily a question of perception — they’re most certainly heavy. “Burn” is one of the strongest examples of King Woman’s hazy doom trip, with high-end riffs wailing like emergency sirens over a dense and fuzz-packed backing. And “Wrong,” the opening track, is the closest the band comes to conjuring a pure doom metal sound, its riffs slowly descending into a funereal murk. It’s dark, and it’s thick, and at times feels like there’s no easy way back out of its harrowing depths. But then there’s Esfandiari, whose emotional delivery acts as a kind of spirit guide, carrying the listener through these alternately beautiful and overwhelming surroundings. Its a feeling and rush of emotions that are better experienced than scrutinized.