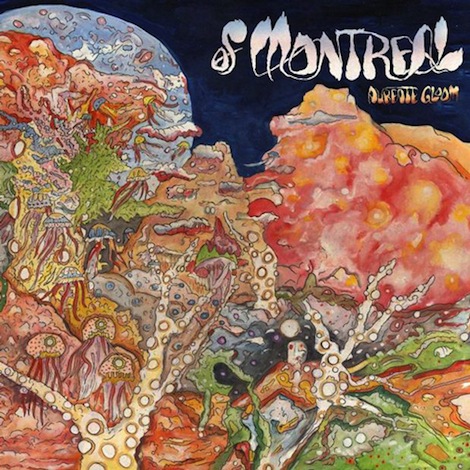 Aureate Gloom is an album that describes that fragile, volatile emotional state many of us have found ourselves in. Of Montreal leader Kevin Barnes, in a press release, describes the overarching mood of the album as “golden despondency,” so a title like Aureate Gloom (aureate meaning gold-colored) is basically an exercise in synonyms. However, in my attempt to pinpoint the mood of the album, I would describe it as that reckless, manic glee that you get after a bunch of really crappy stuff happens all at once. No, I’m not talking that one that has you crying in a fetal position, but more that ‘screw the world’ carelessness, those moments of disjointed romanticism that we get after a breakup, where we are trying to both rediscover ourselves and also make sense of what happened.

On the surface, the album sometimes reminds me sonically of the way a Baz Luhrmann film looks visually — oversaturated, sarcastic, whimsical. Certain tracks are even danceable: of course, when I say dancing, I actually mean something that more resembles what that guy does in Tears for Fears’ “Mad World” video. Other tracks are more subdued and psychedelic. Some sound like angry rants, and some feel like dream sequences. The direct musical influences that went into it are prevalent and immediately apparent, as they were channeled intentionally by a despondent Barnes as he walked around Chelsea and Greenwich Village, so the late ’60s/early ’70s underground glam vibe is undeniable, and at times, a seemingly blatant imitation (especially vocally). The subject matter of a painful divorce and subsequent reinvention could be a huge bummer and could play out really uncomfortably, but Barnes’ candid reflections make for a really honest, albeit sometimes bleak musical experience.

Barnes has said that the lyrics are mostly autobiographical, but presented in a disjointed, abstract sort of way, so thematically the songs come across as pretty esoteric. Lines such as “the mutinous tramp of cold voltage crucifixion is my conduit” reflect the grandeur and pomp of 1970s Yes. Although it feels a little like a concept album, it doesn’t have a continuous, linear story arc, making it more a concept album about an emotional/mental state. It’s pretty easy in certain parts to see those autobiographical bits come out (A direct, clearly stated line like “Why can’t we say nice things to each other?” is an example), as Barnes doesn’t really hold back anything, but the album is best enjoyed if one doesn’t feel like they have to explore each sentence for an overarching narrative structure.

The first track, “Bassem Sabry” (named for an Egyptian journalist and blogger who died in 2014), starts the album off with a sinister, synth-heavy intro that leads into a Bowie/T. Rex lovechild of a song. The song is a bright, thumping disco romp but there is noticeable undercurrent of snark throughout the whole song. Thematically, it sets up a parallel between personal turmoil and a frenetic, unreliable world of fallen heroes. It’s a catchy track that works well as a single. The best track of the bunch is “Last Rites at the Jane Hotel.” I love the big, meaty chords, and the power pop chorus, and there are some zingers, too. Lines like “What gives us the right to be so depressing?” and “Seeking out my own authentic season in hell/Though it doesn’t feel quite as pompous…at least not as I can tell” show the reflective and self-effacing side of introspection.

‘Aluminum Crown’ is a kaleidoscopic trance of a song. Barnes repeats the phrase, “I’ve been cursed by troubled dreams/ I’ve been haunted by troubled dreams/ troubled dreams…” I’d love to see some sort of disorienting video of Barnes wandering Greenwich Village with psychedelic colors, directed by, let’s say, Terry Gilliam. Barnes’ commitment to vintage production values — a relic kept from his Elephant 6 days — is highly evident in “Estocadas,” as a harpsichord gently backs the smarmy chorus. Barnes described certain moments on the album as extremely candid and personal, and in the middle of the song, he briefly describes a weird date gone awry that makes you both chuckle and squirm.

Aureate Gloom is a great combination of escapist obfuscation and deep emotional vulnerability, which have both, to varying degrees, been trademarks of Kevin Barnes’ music in the past. Although I find it has some interesting emotional depth, I feel like it may lack the replayability of other Of Montreal albums. Barnes’ Bowie vocal impression gets old as the album goes on, and musically, the album loses a bit of steam as it chugs along. And though the album is not a good entry point to of Montreal’s extensive discography, Barnes has still managed to put together a decent collection of songs in a relatively short amount of time.