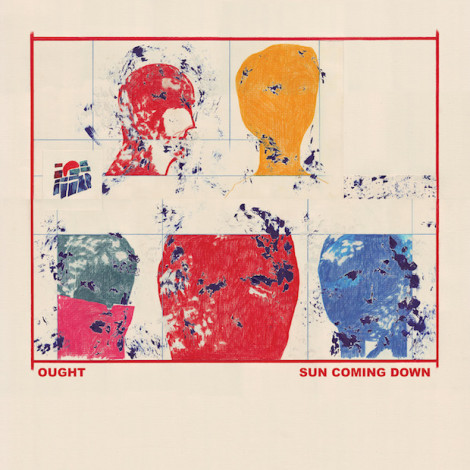 As the members of the band tell it, Ought’s 2014 debut More Than Any Other Day wasn’t intended to be a political record. But that didn’t stop the indie-rock quartet from crafting songs that resounded quite perfectly with the attitude of a particular, disillusioned sub-group of millennials. In fact, that post-punk opus of hope and uncertainty was such a stunning breakthrough for the band that it probably left more than a few listeners with questions as to how the band could possibly top it. When they were a young act that came out of nowhere, it was easy to be blown away by the results. But how would they perform under a spotlight?

Just a little longer than a year later and Ought’s follow up Sun Coming Down showcases a band that’s not interested in repeating history. The Montreal-based core of Tim Darcy, Matt May, Ben Stidworthy and Tim Keen kick off LP2 with a decidedly different pace than last year’s creeping “Pleasant Heart,” which combined Slint-like riffing with a poetic ambiance that more closely aligned the band with fellow Constellation heavyweights Godspeed You! Black Emperor. Instead, a quick tom hit fires the group into a funky post-punk groove which is immediately swallowed by the wall-of-sound aesthetics and sing-along mumblings of “Men for Miles.” Darcy’s vocal presence this time around is more determined and confident; trading in the mysterious poetics of More Than Any Other Day for a sing-speak performance more directly reminiscent by David Byrne’s early days with the Talking Heads. And, following Darcy’s lead, the rest of the band seems determined to craft the best rock record they can, putting interesting grooves and arrangements ahead of angular or surprising compositions this time around.

But Sun Coming Down doesn’t completely do away with the band’s art rock components. “On The Line” repurposes the soft/loud dynamic in a way that recalls a 1990s Mogwai and the record is full of bizarre moments and sparkling interludes that showcase the group’s impressive abilities and creative charm. But the difference is in how long and dramatically the songs depart from their original course. The result is an eight-track record that’s perhaps less immediately striking than Ought’s debut, yet teeming with many more subtle satisfactions beneath the surface.

It’s quite possible that the band’s more streamlined compositional approach this time around was influenced by Sun Coming Down’s thematic elements. While More Than Any Other Day seemed to come from a place of desperation and wonder, Darcy’s attention this time around has been redirected towards ideas of growth and belonging. He still showcases a particular talent for finding inspiring concepts hidden within mundane situations (a quality the young poet also shares with the aforementioned Byrne) but whereas last year’s lyrical nuggets seemed to describe a very specific state of mind, Sun Coming Down’s aspirations seem much broader at their core. Gone is the tension in Darcy’s words that made tracks like “Habit” seem so brutally personal. But stepping back a few paces gives him an almost narrator-like presence that fits beautifully with the band’s style and makes it a little less difficult to assume what he might have to say next.

More Than Any Other Day was about as perfect as a debut can be, and Ought are smart to skip the awkward attempts at fixing what ain’t broke. And while there’s a powerful quality of mystery on that debut that doesn’t carry over to Sun Coming Down, Ought trade it in for more sustainable grooves and a sound that’s less indebted to Slint, Godspeed or any other band and more like, well, themselves. It’s an inevitable growing pain for a young band and Ought manage to stick the landing with riffs and charisma to spare. That’s 2-0 in Ought’s favor, with the bar raised even higher for 2016.

Protomartyr – Under color of Official Right