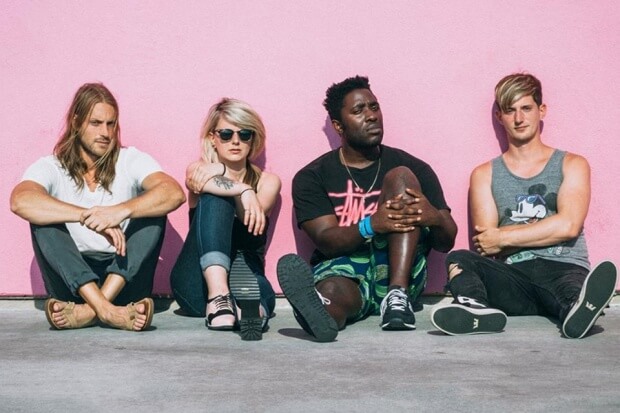 I’m aware that I’m supposed to be in the middle of a self-imposed break-up with British post-punks Bloc Party, and that ban was imposed for good reason, as they’ve disappointed me many times in the recent past. But my curiosity got the best of me when I heard the band was moving on without their original drummer or bassist, and had decided to move forward with a re-formed quartet, recruiting Menomena’s Justin Harris and a young drummer named Louise Bartle. Part of what frustrated me about Bloc Party was the way the group’s strengths as performers seemed to have given way to singer Kele Okereke’s artistic vision without much in the form of return. And, while it’s unclear whether Harris and Bartle joined Okereke and multi-instrumentalist Russell Lissack in the stereo, it’s clear that the re-approached line up is doing good things for the group.

Both Okereke’s solo career and Bloc Party’s recent output have been highlighted by a growing fascination in dance music, particularly in the form of house. And, while the band and singer alike have made some brutal mis-steps adapting this sound, they’ve definitely had some wild success in the form of “Banquet,” “Flux,” and “The Prayer.” So it’s fitting that “The Love Within” opens with a reference to the latter, kicking the vocals off with a direct quote: “Lord, give me grace and dancing feet.” But, unlike “The Prayer,” this track isn’t so quick to show its hand building for well over a minute before launching into a bouncy, house-inspired beat. All-in-all, the song has a lot in common with any of Okereke’s solo endeavors, with one added benefit: Lissack. The guitarist and sound manipulator was always the band’s secret weapon, using a shoegazer’s array of pedals and electronics to transform his dance-able riffs to full-fledged sonic masterpieces. And, here, he’s given plenty of room to breathe, with Okereke’s beautifully understated performance often taking a backseat to Lissack’s captivating melodic gymnastics.

I wouldn’t call “The Love Within” the house-jam of the year by any means. In fact, the band seem to be aiming for a sort of post-house groove, reassessing their own take on the genre in a way that hasn’t stuck this well since “Flux.” While Intimacy and Four both failed to captivate in the same way as the band’s early output, “The Love Within” fully commits to a change and manages to capitalize on it beautifully. While it’s gonna take some work to turn me around on a full album, this jam certainly starts Bloc Party out on the right foot this time around.