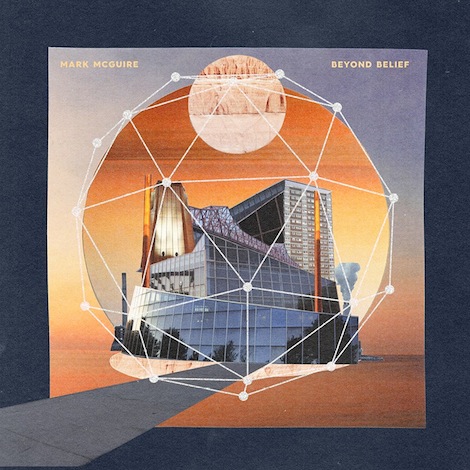 In the past decade, Ohio guitarist Mark McGuire has built up an impressive body of work, having released various full-length albums, EPs and CD-Rs of gorgeously flowing compositions marked by his signature guitar ambiance. And that’s not including his recordings with progressive electronic trio Emeralds. But McGuire has crafted such a singular sound so early in his career that it’s easy to overlook his relative youth. He’s 28, which doesn’t exactly make him ambient music’s Doogie Howser, but considering the volume of music that he’s released—and the fact that he joined Emeralds at only 18 years old—McGuire has essentially amassed an entire career’s worth of work before even turning 30.

McGuire’s sophistication and unique stylistic approach set him apart early on, but if the past year has taught us anything, it’s that there’s still plenty of growth for him to undergo in his own music. His late-2014 EP Noctilucence, informed perhaps by taking part in The Afghan Whigs’ Do To the Beast, was the closest to traditional rock that McGuire had ever come. That record’s “Entity (Presence)” was the sexiest, most danceable piece of music that McGuire had released to date, actually pulling off a beat-driven pop composition in a way that he had scarcely even hinted at before. It’s safe to say he found it just as satisfying, as his new album Beyond Belief pushes further in that direction, embracing pop music’s approachability while staying true to his layered, surrealist guitar aesthetic.

Beyond Belief, much like the transitional steps he’s taken with recent albums, is still a measured and gradual shift for McGuire. He hasn’t abandoned his cosmic soundscapes for disco, but beats are more prevalent here than on any of his past albums. As are one other unexpected element: Vocals. On the album’s third track, “Sons of the Serpent,” McGuire delivers something essentially in the same galaxy as a standard rock song, albeit a shoegazing neo-psychedelic-tinged rock song. His ethereal vocal style blends in pretty comfortably with the soaring strata of guitars, neither obtrusive nor undetectable. They’re just a warm, present part of the song that adds a human element, if not a dramatic one. Too much force behind the vocals would likely weigh down what are otherwise gorgeously constructed songs, most of which don’t feature vocals so prominently. “The Undying Stars” more heavily leans on an electronic beat sequence, though the arrangement itself hews closer to McGuire’s prior solo guitar jams. But the true masterpiece here is the 16-minute centerpiece, “Locked in Our Sky Language (For Cyan)”, which builds from a Reich-style minimalism into a monumental piece of cosmic electro.

For how far McGuire has come, much of the progression he makes on Beyond Belief still feels a little cautious. Considering four of the tracks on the album span well beyond 10 minutes apiece, it’s not as if his ambition has waned. And one of those tracks, “Earth: 2015,” showcases the kind of surprise that McGuire releases in small, gradual doses. It’s easily the most chaotic moment on the record, its electronics and sputtering beats competing with his guitar landscapes for attention and dominance of the track. It’s a little jarring. It’s also invigorating, which on an album of hypnotic electronic ambiance can be a most welcome thing.

Emeralds – Just to Feel Anything