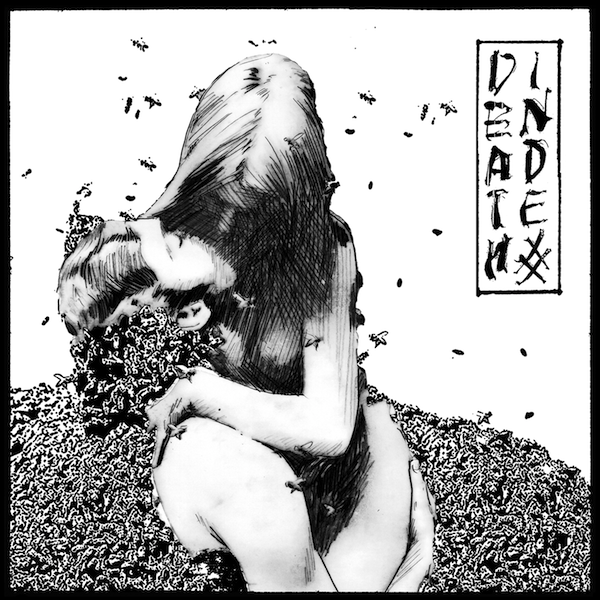 Carson Cox, the frontman of shoegazing post-punk outfit Merchandise, has a background in playing hardcore in Tampa’s D.I.Y. scene. That, in itself, isn’t necessarily so surprising. Almost every indie band, even the ones whose music is nearly drowned out by the sound of the buzz surrounding them, has origins in similar D.I.Y. communities, whether punk in sound or simply in ethos. Merchandise doesn’t really play hardcore, though, nor does Cox’s Morrissey-like croon seem like a natural fit for four-on-the-floor power-chord raveups. But it’s also not so difficult to make the leap—their music is pretty loud, and just a little more noise and aggression would turn a raucous indie band into a perfectly passable punk band.

Following the glossy new wave of Merchandise’s most recent album, After the End, Cox makes a concerted effort to return to his punk roots with his new band, Death Index. A proper hardcore band with noisy anthems written for circle pits and gang-vocal shout-alongs, Death Index is aggressive, discordant back-to-basics bruising that goes straight for the jugular. The band’s self-titled debut on Deathwish Inc. operates more or less how a good hardcore record should: A screech of feedback at the beginning, a quasi-d-beat gallop to burst open the doors, lots of distortion, lots of attitude, and only three songs that go past three minutes. It’s loud, straightforward and unpretentious punk that throttles and never lets up.

As with many a punk record, however, it’s in the subtleties where Death Index most strongly assert their identity, and even when recklessly blazing a trail toward oblivion, they find the time to add certain flourishes and touches that turn an invigorating jolt into something much more interesting. The guitar riffs that arise near the end of “Dream Machine” add greater depth to a murky chug, while the back-and-forth between a lurch and a gallop on “Little ‘n Pretty” maintains an unpredictability that’s somewhat rare in a four-chord throwdown. The strongest moment here, however, is the least punk: The electronic darkwave throb of “Lost Bodies” is ominous and unsettling, but rhythmically seductive. Not that Death Index go back to their reliable pool of menace and brutality a few more times afterward, but it’s good to know that there’s just a hint of subtlety and complex allure beyond the immediate thrill of the mosh.