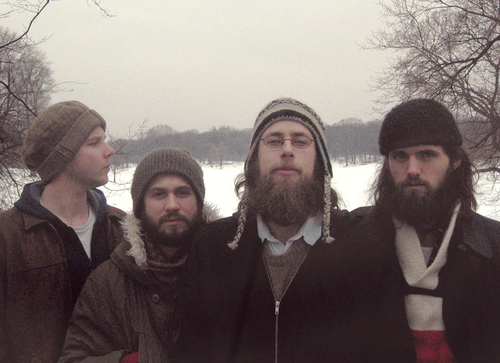 The line between reality and myth is often blurred in rock music. Ever since some members of Led Zeppelin may or may not have done obscene things with a groupie/shark sandwich, the oral history and off-stage curiosities about musicians have become almost as important as the music itself. The better the bio, the bigger the intrigue it seems, and this idea hasn’t diminished at all today. Rumors and legends only seem to enhance how much interest the listener puts into a record. And no better example comes to mind than Brooklyn quartet Akron/Family.

You may have already read the band lived in communal quarters. You may have already been told about the band’s three-hour plus live performances, often resulting in lengthy renditions of existing songs, improvisational jamming, and the occasional noise freak-out. And then of course, you have the members’ penchant for growing thick tufts of facial hair, which is present in most press photos. Add, on top of that, the bizarre fantasy images on the band’s website and Myspace page, throw in an odd musical creed that the band calls “Ak-Ak” and you have the makings of one really unusual and intriguing persona.

The story of Akron/Family begins in Brooklyn, where the four individual members shared living space while writing and recording music. Drummer Dana Janssen and guitarist Seth Olinski were old school chums and met up with guitarist Ryan Vanderhoof and Miles Seaton to begin a new musical project, which they dubbed “Akron.” Friends would join in and lend their talents to Akron’s music, thus expanding the group and its name to “Akron Family.” Somewhere in the middle, the central four players tightened in terms of becoming a real “band,” a slash was added between Akron and Family, `Ak-Ak’ was put into practice, and they ended up as we hear them today.

Despite the implications that come with home recording, however, much of the recordings that the NY foursome recorded ended up on the band’s debut full-length album. Miles Seaton sat down with me at the band’s merch booth before a performance at the Casbah and delved further into the origins of their first recordings.

“Everybody lived together for a while,” Seaton said. “We lived in an 800 square foot warehouse space in Bushwick, which is a pretty gnarly neighborhood. Or, at least, the part that we lived in was pretty gnarly. It was just like…no division, no rooms. So we just got really strung out on Cuban coffee and went crazy. A lot of the recording was done on an archaic sequencing program called Fruity Loops, so the way that it works is just that you layer samples on top of each other. So we would spend a lot of time mining for weird little sounds and blowing those out. We would spend a lot of time on these files. And someone would come up with a riff, then maybe some words, and we would just kind of pad things as we felt like it. So the songs evolved as sort of improvisation, in a way. Some songs were more composed beforehand. Half of the material that’s done in that way, really, and the other half was recorded in a studio.

“We did some embellishments, some vocal overdubs,” Seaton said. “Some of it is just how it came out. From a technological perspective, when you take Fruity Loops files, we would have sixty tracks or whatever, and you would have to put eight tracks on one and transfer them to ProTools files, so we could mix them in the studio. And it’s just such tedious, monotonous work. But we finally listened to it and it sounded so amazing. The tracks had space and it sounded really cool. `Suchness’ is one of the more extreme sounding tracks and it was all recorded at home on a crappy computer.”

Akron/Family was one of the surprise breakthroughs of 2005, earning the group almost universally glowing press and an ever-growing fan base. Melding the folkiness of prior labelmate Devendra Banhart, the quirky pop sensibilities of Grandaddy, the soaring psychedelia of Mercury Rev and the stomping hard rock of Led Zeppelin, Akron/Family are as eclectic as they come and also as unpredictable. And they also lay claim to completing a feat that many artists attempted in 2005, but few succeeded in doing: releasing two awesome records. Ryan Adams, Bright Eyes, Prefuse 73 and The Fiery Furnaces all gave it a shot, but Akron/Family’s debut and their subsequent split with Angels of Light (the project of Young God label head Michael Gira, which features all four Akron/Family members as backing musicians) gave every seemingly prolific artist a run for their money.

Akron/Family toured with Gira as his band after the release of Angels of Light’s Sing Other People, and from there, a new recording project was born. One “side” of Akron/Family and Angels of Light consists of seven Akron/Family songs, mostly holdovers from the first record, though none of them any lesser in quality, particularly the stomping wild rock `n’ roller “Raising The Sparks.” The Angels of Light side, however, finds Akron/Family backing Gira on four somewhat subdued originals by comparison and one Bob Dylan cover.

“[The Split] was Michael’s idea,” Seaton said. “After touring with us, he tells it straight, feeling like we were progressing rapidly and having this visceral live experience and juxtaposition of having this record that’s super mellow and sometimes a little too cerebral. He just felt like it was important to capture that stuff and he also wanted to document the relationship of the groups.”

This coming summer, the band will be reconvening with Gira to record another full-length album as The Angels of Light, and a subsequent tour will follow. In the meantime, however, the band members have been individually working on songs for future Akron/Family releases. When the Family puts their songs together, however, all sense of conventionality and straightforwardness goes out the window. Their songwriting process, though sometimes simple, can turn into a chaotic and unpredictable beast. Seaton says, however, that in the future, the band’s approach may not be nearly as experimental, though there is always the possibility.

“At this point, we’re dealing with a lot of old stuff, so our new record will have a little different, more dignified approach,” Seaton said. “Everyone in the band writes their own songs. Seth is unbearably prolific. He writes…he’s probably written 100 songs in the last few months. The guy is insane. He writes a lot of songs. So most of the songs on these records were brought in skeletal form by one person and then destroyed by the whole group. And then played over and over, and stretched out, and there’s even some improvisation. But writing is kind of a curse, because one person comes up with a clear, ideal structure and then bringing it to the group, it just gets kind of slaughtered. And then, I imagine that some of the new process will be more writing from improvisation or just building off of riffs.”

Part of the band’s unpredictable and wildly creative spirit has been attributed to (and here’s where the mythology comes back in), “Ak-Ak.” Credited on the Young God records website as a “quasi-religious sonic worldview/creed,” it sounds almost as if it were an ancient, mystic practice that the band has tapped into to create music. But as I ask Miles about this particular aspect of the band’s persona, he dissuades me from this belief, despite joking that it’s “like Buddhism, but older.”

“It’s like, it’s kind of just being really obsessive and coming up with some stupid terminology for sounds,” Seaton said. “Like, `oh, that’s so ak-ak.’ It’s just some random thing. Michael, when we were in the studio with him, he saw us constantly…like one thing would come up and everybody would be jumping at it and saying `I have a fuckin’ idea! Arrrrggghhhh!’ And I think he saw us as being…and because we hadn’t listened to all this other popular music…in his mind, we were these really isolated dudes that, like, saw sound. So he was referencing that and also just writing a really good press release. Because, we’re really fucking absurd and he just made it sound really serious.”

The future appears busy for these four young, bearded Brooklynites, as more touring ensues and recording begins. Seaton contends that he and his bandmates need to take a month to have some time to themselves (and girlfriends) and unwind before taking on further projects. But after a little rest, they’ll be ready to move on and tackle the future. And that, to Akron/Family, means starting fresh.

“At this point, all of our minds are focused on, first releasing the vinyl of the self-titled record, and then getting to work on new material,” Seaton said. “Getting into the old material right now is like, `man, it’s old stuff, let’s move on!'”