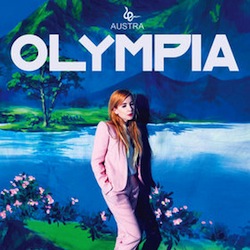 Austra’s introduction in late 2010, via the ominous throbs of debut single “The Beat and the Pulse,” came in dark shades and hues. A synesthetic might be able to better pinpoint the Pantone numbers, but a rough estimate puts it between a deep black and a carbon grey, with traces of cobalt blue around the edges. That single, and the album it was later featured on, 2011’s Feel It Break, presented the Toronto synth-pop group as modern heirs to a goth-rock tradition, and that more or less covered it. Even if it might take some of the more old-school goth clubs to catch up — which shouldn’t take long, Cold Cave goes gangbusters at the local batcaves — “The Beat and the Pulse” had the hooks and the dark romanticism to join the pantheon of gothic dance greats.

After a good two years reveling in stylized darkness, however, Austra showed signs of branching out, and away from a post-punk or EBM (not EDM, kids) stereotype. The reveal of second album Olympia’s album cover, for instance, depicting frontwoman Katie Stelmanis in a pink suit against a faux-tropical backdrop, seemed about as far away as possible from its predecessor’s abstract darkwave art. And at one of the many SXSW parties Austra played earlier this year, Stelmanis took the stage wearing sunglasses with heart-shaped frames, putting on a lighter, more playful face for a steamy, beer-sleepy 4 p.m. crowd. That there were more shades in Austra’s palette shouldn’t be a surprise to anyone who dug deeper than their singles, but Olympia seems to expand it to a much greater degree.

With first single “Home,” Stelmanis & Co. built a bridge between their early, eerie pulses and the club-friendly pop direction they’ve explored on Olympia. It opens with stark piano chords, presenting a very different sort of gothic texture if one still reasonably haunting, but in short order this gives way to a groove-heavy Balearic club sound, heavy on rubbery basslines, hand percussion and textured flute leads. It certainly seems more lighthearted, but it’s a curious juxtaposition against Stelmanis’ anguished lyrics: “You know that it hurts me when you don’t come home at night.” What drive the song are not just snaps of bass and snare, but the pumps of a beating, broken heart.

More so than its predecessor, Olympia zeroes in on a more distinctively European dance sound, retaining flashes of the buzzy darkness of before while giving way to more lush flourishes and ecstatic arrangements. The ethereal kraut-beats of “Painful Like” could comfortably fit somewhere between New Order’s Technique and Disclosure’s Settle, while the subtle synth hooks of “Sleep” aim for a more cosmic, new age feel. Traces of The Knife’s “Heartbeats” emerge in “We Become,” while “Annie (Oh Muse, You)” does a lot with a little, opening up its verses to suspenseful expanses of space as its undeniable beat does the heavy lifting. But dancing alone can’t make the pain go away. On “What We Done,” Stelmanis presents herself as the sorrowful figure caught in tragic movement (“So I dance with nothing/ So I dance for free/ And there is no love here”). And though it’s described in less explicit terms (“You could come here anytime/ Run past their prying eyes”), the gay-youth narrative of “Painful Like” juxtaposes sexual redemption with the feelings of confusion, shame and persecution that those who aim to point fingers could never understand.

If there’s an escapist feeling that pervades Olympia, it’s primarily a façade; beneath the woodblock, cowbell and disco basslines are Stelmanis’ most emotionally naked lyrics to date. Though, had the band chosen to drape them in equally morose musical arrangements, the whole thing might have turned into a hopeless bummer. They didn’t; rather, the dancefloor became the venue for redemption and catharsis, as it has so often served in pop music, and there’s a good reason for that. There are a lot of ways to numb yourself, but most of them do a lot more damage than merely giving yourself away to the music.