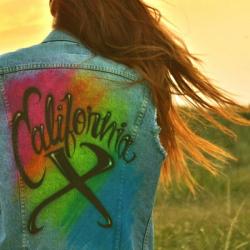 A good punk song never really goes out of style. From generation to generation, that song may come dressed up in any variety of era-appropriate fashion — glossed over, scuzzed out, grunged up, earnest, snotty, angry, scary or caked in shit, spikes or eyeliner — but if it’s got the right ratio of melody to menace, and injected with an infectious dose of youthfulness, then it’s pretty much guaranteed to feel right. It doesn’t have to make sense. It doesn’t have to make a statement. As long as it’s young, fun, and above all, loud, then it’s golden.

California X, a band not actually from California but rather Amherst, Massachusetts, ticks off all three on the checklist and then some on their self-titled debut album, though their brand of punk rock owes a particular debt of influence to `80s SST Records sounds and `90s alt-rock. And it’s not a coincidence that Dinosaur Jr. fits under either umbrella; California X hails from the same New England town as J Mascis & Co. and share a similar affinity for eardrum-busting fuzz and squealing guitar leads. Yet for all the righteous guitar leads that Lemmy Gurtowsky shreds out over the course of these eight songs, the band typically opts for a more streamlined approach over Mascis-style solo freakouts. The band’s got chops, and they know how to use them, but allow plenty of room for even greater feats of texture and choral hooks.

As punk rock goes, California X doesn’t necessarily buy into the idea of making as much noise as possible in the span of two minutes. In fact, the album’s first song, “Sucker,” is also its most epic, running a sprawling six minutes and spending nearly two of those building up a head of steam before even launching into a verse. Still, as grand opening statements go, it’s a glorious one, as much about building a thick layer of fuzz as it is a showcase for wonderfully anthemic melodies. Imagine Husker Du covering Smashing Pumpkins’ “Cherub Rock” and you’ve got a pretty good idea of just what kind of raucous majesty the band pulls off.

The rest of the album comprises much more concise rockers, though they never seem any less huge. “Curse of the Nightmare” is half the length of “Sucker,” yet it’s just as loaded with big choral melodies and riffs stacked upon riffs. The same goes for “Pond Rot,” a slower-paced grunge standout that musically matches up with Gurtowsky’s description of being “down in the fishy deep/ where it’s dark and cool.” Yet the fretwork here is all the more impressive, the song’s wordless chorus all the more powerful as a result of some infectiously ascending riffs. “Spider X,” meanwhile, ramps up into a viciously careening tempo, loaded up with even more thrills than the album’s average track, which is to say, a whole hell of a lot of them. And as a nifty little treat, its coda is a reprise of “Sucker,” played on piano.

As much as California X are the sum of their influences, the ratio of freshness to familiarity on their debut is remarkably high. The warm, lived-in nature of the material lends it an immediate appeal, but its undeniable layers of melody and unflappable energy are what make it worthy of revisiting, potentially over and over and over again. Cheech and Chong famously joked that you don’t have to know how to play to be punk rock, you just have to be a punk, though that’s certainly not the case with California X. The Massachusetts trio may be young, loud and snotty, but as they effortlessly prove here, that doesn’t mean you can’t also play circles around your peers.

California X : Nights in the Dark

Stream the new California X album, Nights in the Dark