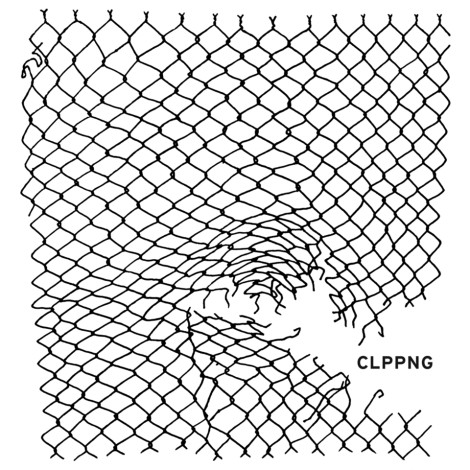 Industrial rap never seemed a likely candidate to go mainstream, but last year Kanye West breached that eardrum-tormenting taboo when he weirded-out an SNL audience with his Yeezus highlight tracks “Black Skinhead” and “New Slaves.” That the album went gold seems unprecedented for hip-hop’s most difficult art form; that it’s West’s worst-selling album serves as a kind of proof-of-concept. Even in the hands of of a proven hitmaker, it’s an unwieldy sound that thrives on noise and pummeling percussion, mechanized effects and sheer sonic terror. It’s not for the squeamish or sensitive, and for the most part, the commercially ambitious — Michael Franti did ditch the discordant assault of Beatnigs and Disposable Heroes of Hiphoprisy in favor of Spearhead’s hippy-dippy conscious rap, after all.

Los Angeles trio clipping. don’t really sound like they give a shit about mass appeal. The first sound on CLPPNG, their Sub Pop debut, is a high-pitched, increasingly unbearable squeal that screeches beneath Daveed Diggs’ 65 seconds of high-speed rapping. It’s an affront to the listener — an endurance test that doesn’t just challenge but actually antagonizes. As the piercing tone shifts slightly, it grows ever more difficult to keep up with Diggs’ lyrics — both witty and astonishingly acrobatic in execution — and in the end, may very well draw a line in the sand between those who can hang with clipping.’s torture-chamber thumps and Russian roulette jams. “Enter at your own risk” doesn’t really seem strong enough a warning here.

Production team William Hutson and Jonathan Snipes erect an urbanscape of creaky fire escapes, dead-bolted basement doors hiding cryptic, muffled moans, and cars that use blood as an alternative fuel source. And they’re not afraid to push the limits of tolerability — if the opening shriek of “Intro” wasn’t intense enough, the harrowing loop of digital alarm clock sounds in “Get Up” might very well drive you to lose your shit in record time. But the group’s musique-concrète-with-beats technique is most often used as a means to drive a satisfyingly gnarly boom-bap. Few hip-hop songs outside of El-P’s catalog have used such ugly sounds to surprisingly catchy effect as “Body and Blood,” a steady thump of metallic bass drum and drill squeals on its pathway to a blood-curdling reading of its title and Diggs’ provocation to “Twerk somethin’ girl” and “Kill somethin’ girl.” Even catchier is “Work Work,” a jaw-dropping mix of hubcap gamelan and subwoofer-caving bass with an appropriately nerve-wracking video to match.

The brand of noise-hop that clipping. explores on CLPPNG is highly effective as both a hook-delivery system and as an experiment in just how far beyond hip-hop’s limits they can push. But the grayish areas between, and the limits that stretch out to opposite extremes, just as frequently harbor the most compelling material. The slow-mo beats and ambiance of “Taking Off” provides a haunting backdrop for Diggs’ verbal calisthenics, which begin with Black Flag and Biggie references on their way to dropping one-liners like, “The only god here is the Jesus piece they rockin’ like hipsters rock Jeezy tees/ Ironic.” Diggs’ twisted whisper reading of Notorious (“It was all a dream/ pictures in Murder Dog magazine“) comes across more like slam poetry than actual rapping on the hushed tingle of “Dream,” and what begins as fucked-up CD skipping sounds on “Ends” gives way to the album’s most hypnotic psychedelic rap jam.

CLPPNG is a commitment — a highly profound and worthwhile one, but still not an easily digestible hour of music by any means. After you make it through that first track, there’s a minefield of dangers ahead, spewing aural shrapnel and sonic debris. And clipping. are keenly adept at resculpting those shards and spikes into bold, rhythmic works. But that doesn’t mean that the experience grows any less intense, or their textures any prettier or catchier in a conventional sense. There are enough nods to ’90s and ’00s rap giants to conclude that clipping. wasn’t raised on Einsturzende Neubauten alone, but these munitions testing grounds don’t end with “Bound 2.” It’s cute that you’d think that, though; hold still — this might hurt a lot.