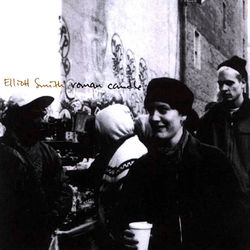 Maybe it’s a trite observation, but a friend of mine used to describe a debut album as a sapling or seedling. It peeks out of the ground, teasing people with its possibility to grow, forcing those who admire the debut to ask, “Well, how lovely. How will this little thing mature?”

With Roman Candle, few could probably guess just how large the canopy would grow on Elliott Smith’s later major label releases XO or Figure 8. Recorded on a 4-track in the basement, the thirty-minute long Roman Candle doesn’t necessarily hint at the big sounds to come in the future, but it introduced Smith’s angelically distraught voice, his talent as a musician and his burgeoning skills as a lyricist.

At the time of Roman Candle’s release, Smith was the frontman of Heatmiser, a Portland outfit he wasn’t particularly keen on due to creative differences and a sense of artistic inauthenticity. The band’s manager and Smith’s then-girlfriend, J.J. Gonson, sent a tape copy of Roman Candle to Cavity Search Records. The label, rather than releasing a single or seven-inch, decided to release the tape as a full-length. Smith was in his mid-twenties at the time of the album’s release, though some songs were written years earlier. The evocative “Condor Ave.” or the angst-filled “Last Call,” for instance, were both written when Smith was in high school.

Roman Candle opens with the title song, a sinister whisper backed by relentless acoustic strums, pronounced scratches as fingers shift on the fretboard and a hazy, overdriven guitar. The narrator is on the brink of some major emotional outburst, declaring himself a roman candle, his head full of flames. Along with making the offending party feel hurt and pain, the narrator wants him to “feel this pretty burn.”

This brooding opener sets the tone for a majority of the album where jilted victims or rejects of all kinds seek release or escape. On “No Name #1,” one of four songs to bare no name, a socially inept partygoer realizes he doesn’t belong. He’s wonderfully described as “Looking kind of spooky and withdrawn / Like he could be underwater.” The only thing to do rather than suffer his awkwardness and stumble over conversations is to leave alone, or so it’s repeated. “No Name #4” follows a woman fleeing from an abusive relationship trying to put it all behind her. Smith seasons the song with some finely placed details. He hums along with a lone guitar, “The car was cold and it smelled like old cigarettes and pine / In her bag I saw things she drew when she was nine.”

“Condor Ave.” is one of Roman Candle’s big standouts. Smith’s guitar work is dazzling as is the way he layers and harmonizes his vocals. The lyrics evoke a certain quiet, dreamlike solitude; melancholy brought together with the sudden sense of slow motion stumbling off a curb. Lyrics such as “the sound of a car driving off made me feel diseased” evoke the sickness of loneliness, and the refrain “trying to make a whisper out of you” capture a lovelorn narrator’s attempt to get over a love lost.

The almost dirge-like “Last Call” is the most aggressive song on Roman Candle, building from a lone acoustic guitar into a crawling, resounding, bitter rant about a relationship gone sour. Bitter epithets are thrown out, biting accusations branding, “You’re a crisis / You’re a icicle / You’re a tongueless talker / You don’t care what you say.” The narrator in a miserable, self-pitying binge tries to escape into a stupefied sleep that can’t be penetrated by memories of an old love. The album ends on a much more calm instrumental, the haunting yet hopeful “Kiwi Maddog 20/20.” As a closer, it sounds like something you’d listen to driving on a long, dark desert highway, leaving a small town for an uncertain but hopefully better future. There’s a head-nodding whimsy to the echoing, surf-guitar strums and lazy drums. It’s a welcome calm after “Last Call,” a quirky, almost-but-not-entirely out-of-place finale to the debut.

Roman Candle is sometimes placed into a lesser category than Smith’s subsequent releases, but this debut is much more than just a prior release to Smith’s revelatory self-titled second album. Roman Candle is a bright spark, one that has not diminished since its release or the loss of its author. If anything, it burns brighter, an ember of who Elliott Smith was and what he’d become, an incandescent outburst that burned so pretty but so briefly.