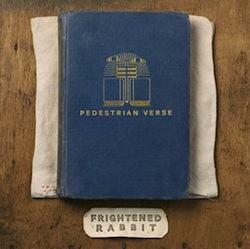 As the leader of Frightened Rabbit, Scott Hutchison isn’t much for motivational speaking. The closest he’s ever gotten is 2010’s “Swim Until You Can’t See Land,” whose refrain went, “Are you a man or are you a bag of sand?”, which sounds more like tough love when you get right down to it. His lyrics paint a portrait of a protagonist who is less hero than ne’er-do-well. He can be a loveable fuckup, a sympathetic and self-deprecating everyman or a desperate drunk, but rare is the occasion in which he assumes the role of captain or coach.

For the most part, Hutchison’s roguish, whiskey-drunk verses have been a perfect fit for Frightened Rabbit’s scruffy, barroom indie rock. Think of it as the reverse of the current Top 40 trend of earnestly treating five minutes on the dance floor like a climactic moment of truth — Hutchison’s narratives still involve nightlife, drinking and coitus, but often end with a bitter or regretful taste. With each album, however, from The Midnight Organ Fight to The Winter of Mixed Drinks and on up to new full-length Pedestrian Verse, the band’s music seems to continually aim for something much bigger and more universal. Musically, they’re soaring high, but Hutchison’s lyrics, which more than ever seem to aim for self-improvement (no matter how trying), tell a story that’s far from triumph.

Pedestrian Verse begins with a soft and subtle confession of horndog misanthropy: “I am that dickhead in the kitchen/ Giving wine to your best girl’s glass.” And what follows is an anthology of humanity’s basest, most cringe-worthy tendencies, pit against the desire to do the right thing, Hutchinson closing the song by crooning his honest intentions, “I’m here, not heroic but I try.” This sets a contrasting tone for the rest of the album, in which big and heroic sounds are juxtaposed with knowing imperfections and the occasional humiliation. At the band’s most urgent, as on the driving “Backyard Skulls,” Hutchinson reminds the listener that all those “backyard skulls,” the moments we wish never to be reminded of, are “not deep enough never to be found.” And on the similarly urgent “Holy,” Hutchinson brushes off the sanctimonious, plucking the splinter in another’s eye while acknowledging the plank in his own: “Spare me the brimstone/ Stop acting all holy/ Me, I’m just full of holes.”

In the album’s best song, the darkly creeping slow build of “December’s Traditions,” Hutchinson puts it pretty plainly, singing, “If you want a saint/ you don’t want me.” It’s a blunt honesty that doesn’t always come attached to music that sounds so big, but Hutchinson seems less interested in giving in to fantasy than the idea that, as Mick Jagger once sang, we all need someone to bleed on. We all do the wrong thing, we have self-doubts and know that not every portrait of ourselves is all that flattering. Frightened Rabbit understand and champion this idea, which can be even more cathartic in the end — failure is a much more universal feeling than victory ever was.