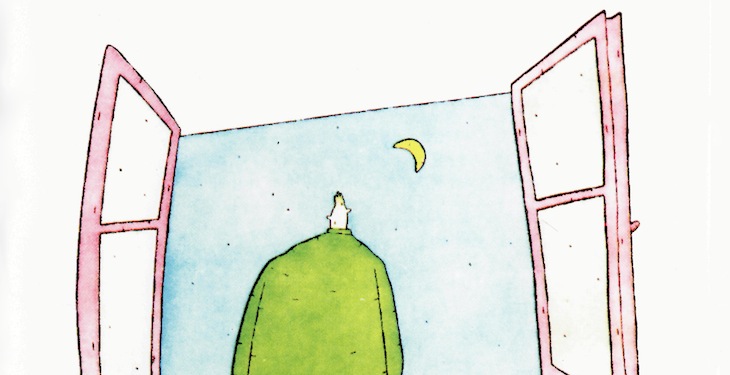 In the 70s, Genesis were derided as educated, highbrow rich kids who pranced around the stage in costumes. In the ’80s, they were reviled as the antithesis of the rock ethos — bland, easy listening and pointless drivel written by a bunch of goofy looking British dudes. Phil Collins, a remarkably talented drummer (see Brand X if you don’t believe me) and an undeniably influential voice in modern music, has been slammed by critics and fellow musicians for decades. Years after their heyday, regard for the body of Genesis’ work only rises. Critics have long since embraced early Genesis in modern press, and the dense, pompous and highly literate indie rock of the ’00s carries echoes of the theatrics of the band’s early years.

But post-Gabriel Genesis still demands a reassessment. The songwriting team (Rutherford, Banks, and Collins) that would later sell hundreds of millions of albums is still casually derided in rock press. I have heard numerous times from early Genesis fans that the band should have ceased to exist after Gabriel’s departure, and I believed that myself for a number of years. However, my personal reassessment began with a bit of understanding of historical context, and careful listening of the masterful 1980 album Duke. Thirty-five years later, Genesis’ Duke stands out as one of the band’s most effective statements, both musically and thematically.

Genesis had been struggling to find its footing after the departure of Peter Gabriel. The group had gained a cult following at this point, in no small part due to Peter Gabriel’s elaborate theatrics, which included strange lyrics, costume changes, and bizarre, often absurdist monologues between songs. Phil Collins, who reluctantly took over vocals on Trick of the Tail after hundreds of flat auditions, was put in a difficult spot. Collins, who was an extremely talented drummer but didn’t have much experience as a rock ‘n’ roll frontman, had to decide to what level he was able replicate the theatrics of the previous iteration of Genesis. The problem lies in the fact that Collins undeniably has a presence that reminds you less of an omniscient skywatcher (“Watcher of the Skies” required a strange bat-looking costume) or a Puerto Rican punk (a la The Lamb Lies Down on Broadway) and more of your cool uncle that had the van with the mini-fridge. 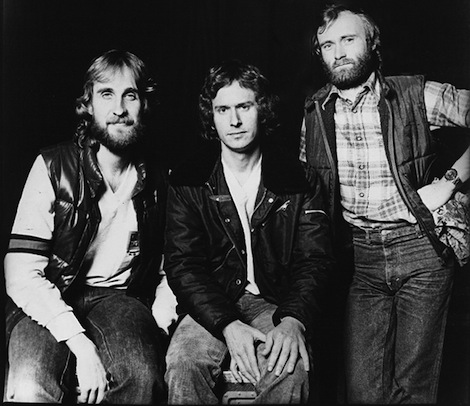 On the tours for the albums that followed Trick of the Tail, you can see Collins’ discomfort as he sings the classics, although he is vocally on point, and even better on some songs (it has been said that the only person on Earth who sounds like Peter Gabriel is Phil Collins, and vice versa). While Gabriel’s shrieks and shouts brought a hard edge to Genesis, Collins’s tamer voice and humble presence smoothed them out. Additionally, Genesis began to witness the demise of the progressive giants. After Yes released the bloated Tales from Topographic Oceans, and ELP released the monstrosity that is Love Beach, “progressive rock” began to become more of a Spinal Tap-worthy joke, and the rejection of the pomp and arrogance of ’70s prog paved the way for more democratic styles like punk and new wave.

Steve Hackett’s departure after the release of Seconds Out would be yet another blow to a band that was beginning to burn out. The subsequent effort, And Then There Were Three… is an uneven album as a whole, but in many ways, it was an audio guide to the growing pains of a band that is having to adapt to unforeseen changes. The longer epics were replaced by shorter songs with clearer definitions between verse and chorus, and most shockingly, the album had a pop ballad that actually charted (“Follow You, Follow Me”). This was an album that alienated fans on both sides — the progressive elements turned off the average listener, and the poppier elements and the absence of Hackett’s masterful playing turned off the die-hard progger (Play “Follow You, Follow Me” to a room of prog-rock fans and watch them writhe and convluse) Genesis, as a band, had to make some decisions. They took an extended hiatus as a band, for both personal and musical reasons, wrote some songs and released some albums of their own, and then regrouped with a number of songs written for the band.

After a number of months had passed, Phil Collins, Mike Rutherford, and Tony Banks met together in Phil’s house and began to play around with various ideas. The product of these songwriting sessions would be Duke, one of the most divisive albums in Genesis’s long discography. Duke was Genesis’ breakthrough — it was their highest charting album at the time, and it yielded a number of singles that did surprisingly well. It is unabashedly progressive in certain moments, but other songs almost verge on radio-worthy pop or easy listening. For some, Duke was the album that saved Genesis from fading into ’70s obscurity that befell many other of the arena rock bands and thrust them into the limelight. For others, Duke was the the jump-the-shark moment when Genesis, one of the most seminal, influential and cerebral progressive rock bands of the ’70s became pop stars and sold out, which in the prog-rock world, is a cardinal offense in the order of Judas’s kiss.

Part of the reason why Duke worked so well was that the songwriting process, previously controlled by the more dominant Banks and Rutheford, had become more streamlined with Hackett’s departure. Whereas dominant, competing voices battled for a voice before (as Gabriel recently pointed out, “No great novel was written by committee”), the new model of Genesis involved all three band members bringing either partially or fully formed ideas to sessions and completing them with the band. Phil Collins had been working on refining his songwriting ability, something he had not previously done, but his approach was much simpler and more formulaic than what you had seen on previous Genesis albums. The oft-noodly Tony Banks proposed writing a 30-minute epic that would be an update of sorts of their previous epic, the 23-minute “Supper’s Ready.” Much different than progressive rock albums at the time, however, was the idea that the epic should revolve around a guy named Albert’s life failures. While this may seem perfectly normal, progressive rock had a reputation in the ’70s of dense, verging on escapist themes: ELP’s Tarkus was a retelling of an epic battle with volcanoes and manticore tanks, while Yes based an entire album on Siddartha. In this context, the idea of writing a half-an-hour song cycle about a simpleton named Albert who just kind of sucks was strangely daring. While they ultimately decided to parse out the songs throughout the album, the repetition of motifs and themes makes for what Rutherford called “a balanced album”, and in a large part, a thematically consistent one.

The album begins with the energetic “Behind the Lines,” a bright, melodic opener that illuminates with Collins’ dynamic drumming. The strong opening is subdued in the tragically bleak “Duchess,” which starts out with a drum machine — something that Genesis had not used up until that point and would later become part of a trademark sound in Genesis and Collins’ solo work. “Duchess” works on many levels — it talks about a woman’s meteoric rise to fame and addiction to the limelight, but manages to create a mechanical, impersonal air that paints a musical picture of the oft-futile and fickle pursuit of fame. The short “Guide Vocal” segues into the claustrophobic “Man of Our Times,” a song that, while not part of the Duke suite, further plays into the modern existential aspects of the album: The dredge of “another day, another night, another fight.” This song, while somewhat repetitive, is one of the highlights of the album, just because of the drastic stylistic difference from previous Genesis songs and the harsh, almost industrial feel it has. “Misunderstanding” is a representative Phil Collins contribution, with the predictable verse-chorus structure that Genesis would later be known for, and perhaps unfairly judged for. “Heathaze” is a Tony Banks composition (one that easily could have appeared on a previous album like Wind and Wuthering) a thoughtful, contemplative song that serves as a bridge into Side Two.

Side Two begins with one of Genesis’ live staples, “Turn It On Again,” a song about loveable loser Albert’s unhealthy obsession with his favorite TV show characters. It’s something of an anomaly, and one of my favorite songs on the album — a progressive rock song in 13/8 that is, for the most part, chorus-less and impossible to dance to, and yet it manages to be bright and infectiously catchy. There are two ballads later in the album, “Alone Again” and “Please Don’t Ask,” that were written by Mike Rutherford and Phil Collins, respectively. Collins apparently wrote “Please Don’t Ask” while he was dwelling perpetually in bars after a very unpleasant divorce. So while they could be viewed as forgettable meanderings, “Alone Again” and “Please Don’t Ask” are perfectly couched within a larger story about the difficult aspects of human relations. “Cul-de-Sac” is a vibrant, jarring ending to the narrative, with Collins forcefully singing the words, “You know you’re on the way out!/It’s just a matter of time/ You thought you’d rule the world forever/ Long live the king, and don’t spare the loser.” “Duke’s Travels/Duke’s End” are largely instrumental, as the melodic themes in “Guide Vocal” and “Behind the Lines” are frenetically revisited in an epic, grandiose ending to Albert’s tale. In these last two numbers, Tony Banks secures his spot as one of rock’s most talented and unique keyboardists, as his nimble arpeggios dance to Collins’ tom-heavy jungle beats.

Many Genesis fans are reluctant to admit the fact that, even on their finest albums, there are a number of misfires. Even on the legendary, brilliant The Lamb Lies Down on Broadway, the narrative loses considerable steam by the time Rael visits the Slippermen. But as the adjective “progressive” connotes some sort of move forward, it is telling that both Peter Gabriel and Phil Collins (together with Genesis) evolved from dense, brooding progressive rock (which delighted in meandering) to daring, sophisticated and succinct pop. Duke is a perfect expression of both the pop sensibility that would later become a hallmark of their sound, and the progressive elements that solidified their place among musicians and songwriters. The modern, existential themes of loneliness, anger, isolation and failure told through Albert’s missteps, and conveyed through Collins’ misfortune, succeed because they are both complex and relatable. Genesis did well by abandoning the escapism that worked so effectively in the early ’70s and moving into more human, relatable themes. The group would continue on throughout the ’80s writing hit songs and albums, but Genesis’ Duke remains the masterpiece of Collins/Rutherford/Banks era Genesis — a perfect bridge between the two antithetical musical contingencies of prog-rockers and casual listeners.