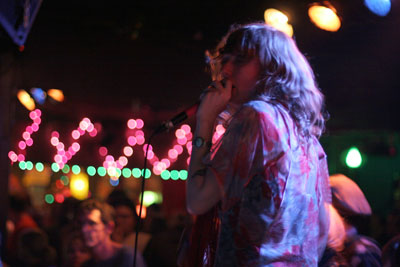 “You probably get one extra Kelvin of heat,” drummer Dave Bergander suggests.

He’s referring, of course, to what distinguishes an eight-star from a seven-star on a scale of relative spiciness in Thai food, a question posed by band mate and multi-instrumentalist Sean Antanaitis. That the restaurant where we’re eating only has a four-star system is irrelevant; it’s the question, in the abstract sense, that’s important. Singer Katrina Ford points to an entry in the menu.

“What exactly is `Penetrating’ Pad See Lew?” she asks. “It makes me wonder what the people in back are doing when they’re making our food.”

Sexually suggestive entrees and queries into the nature of spice ratings aside, Celebration is a band that waxes contemplative when it comes to more serious matters, like say, the decaying state of civilization. But they’ve just arrived in town after a long drive through the mountains and a self-described `awful’ show in Portland the night before. Some menu jokes seem in order.

Zigzagging across the country on tour in support of their newest album, The Modern Tribe, tonight the band sits down to dinner at Buddha, a blink-and-you-miss-it Thai restaurant in downtown Seattle. In a couple hours they’ll be headlining The Crocodile Café, a half-block down the street. They don’t know it yet, but they’re also about to be nominated for three prestigious Plug awards including female artist of the year (for Katrina), live act of the year (to which I will soon discover why), and best album art/packaging. For now they bask in the soft red glow of paper lanterns and decorative bamboo and poke fun at a dish called `Sassy’ Sweet & Sour.

I ask Katrina about the band’s hometown.

” Baltimore is a really cheap city to live in. I don’t think we would have had the time to devote to what we do if we lived in say, New York.” She pauses. “Even though most people think we’re from New York.”

“There’s no real sound, music there is so diverse,” Sean says, a pendant dangling from his neck.

They name-check some eclectic Baltimore staples; Wilderness, Lungfish, Thank You, as well as nod to the burgeoning Wham City art collective (which features such notables as electronic wunderkind Dan Deacon, Cex and Beach House).

“We know a couple of those guys but we’re not really a part of that,” Katrina says of Wham City, “they’re kind of the younger generation, but we’re really excited about it.”

Community is certainly foremost on the band’s collective consciousness, providing, among other things, an idea for titling their latest full-length.

“There is a definite energy,” Katrina says.

“The idea of community,” Sean adds.

Friends appear on nearly every track on the album, including contributions from long time chums TV on The Radio, whose David Sitek has produced each of the band’s releases. The man must be a wonder to work with; his current project is producing, strangely enough, an album of Tom Waits covers sung by actress Scarlett Johansson.

“He[Sitek]’s got stacks of cookies everywhere. He loves cookies,” Katrina says. “We eat a lot of candy when we hang out.”

“We come up with any kind of weird idea we want to,” she says.

“We never use the same process,” Sean says.

Sean and Dave recently spent time with Sitek in a studio in Maurice, Louisiana to play on that very album, on which both will appear as contributors.

“I got to spend a month in the studio just playing instruments,” Sean says. He seems nostalgic. “Dave played drums on one track.”

“That was microwave fast,” Dave corrects us.

Celebration’s musical past is many tiered. Katrina and Sean (they’re married by the way) together formed Jaks and later on, Birdland. In between, in the late ’90s Love Life was formed, in which Dave joined, preceding the current line-up. The band’s sound today, a soulful-psychedelic-tribal-extravaganza, has been a long time coming, and like all forms in this world, seems subject to change at any moment.

“It’s part of the evolution,” Katrina says of the band’s latest muse, “of people, of relationships, and of artists. You can’t erase the past. It’s ever present. So is the future.”

Tracks like “Pressure” from the new album—with whirling percussion dervishes and an organ drone more narcotic than revelatory—showcase Ford’s vocals as they’ve never quite soared before. For the first time this summer she and Antanaitis worked on her range with piano scales. The improvement shows, although her voice has always possessed an unearthly dynamism. She credits quitting smoking two years ago for her extended range.

“I think it will be bigger,” she adds hopefully.

Ford’s voice channels an ecstatic presence that is impossible to ignore. Coupled with the sort of themes prevalent on The Modern Tribe—civilization’s imminent collapse and man’s destructive nature—it’s a powerful combination that would seem too heady, if it weren’t so danceable. Still the ideas strike deep.

“I think we’re just at the end of one cycle,” Katrina says.

“It’s been going on for a very long time,” Dave says. “The age is getting ready to change.”

While we contemplate the encroaching Aztec calendar’s apocalyptic prophecy, less than five years away now, the waitress plops an enormous bowl of noodles in front of Dave. I remind him he’ll be playing drums in a couple of hours.

“Modern living has come to the point where the system is breaking down really quickly; you can see it even in our own infrastructure,” Ford says. “We are doomed to repeat mistakes in the sense that everybody feels the parallel between now and the fall of the Roman Empire. Rome had gone out and conquered so much that they couldn’t support their troops being in all those different places all over the world.”

With the United States military bogged down in the quagmires of Iraq and Afghanistan as it is and with rumors of an Iran conflict looming on the horizon, she makes a lucid point.

“We’re not the only players in this either. Everybody has their own little way of being a part of the breakdown of this modern life,” she says.

The waitress passes a dish to Katrina.

“The planet…you can feel it,” she continues. “Food’s looking really strange these days. Everything’s getting so homogenized. People are more divided and more individualistic at the same time. They’re racing to be so unique they end up divided.”

Here’s where having strong working relationships with friends truly set Celebration apart from their commercialized peers. Their approach is less like an aesthetic and more like a mantra. Their music is certainly more cooperative than divisive.

“I want to be a part of changing those ideas within our community,” she says.

It’s easy to be impressed by a band as socially and globally conscious as Celebration is. Inspired even. But does their music possess such a galvanizing affect?

“That would be nice, but I think it’s just putting the energy out there. Not specifically people listening to our music and saying `okay now I’m going to start recycling’ or whatever,” Ford says.

There it is again, that word, energy.

“The energy you put out into the world has a chain reaction that may not be felt directly, but everybody has to play a part in what they believe in,” she says.

As Ford assures me (“We’re not endorsing a candidate or anything”), the band has no overt political agenda. They converse and think more in terms of what sort of forces are really needed to unite people and ideas of change.

“There’s plenty of negative shit going on,” she says. “The thing is, the power of positive is much bigger.”

At the same time, Dave notes, “You wouldn’t know what negative is if you didn’t know positive.”

For Celebration, this sort of ascendant thought requires a dismissal of more obvious societal distractions: television and “bullshit capitalism” (as Katrina calls it) for instance.

“We all stopped watching TV. It immediately hypnotizes you. I seriously think it’s the most poisonous thing,” Katrina says.

“People worry about who’s getting divorced when they should really worry about what’s going on outside this country that we’re involved in and our tax money is supporting,” Katrina adds.

The band is all too aware of cultural norms that seem symptomatic of a much larger social ill. Eschewing the more obvious aberrations in favor of more productive endeavors, particularly making creative and conscious music, seems to bring Celebration that sense of balance the world is in constant struggle to tip.

“Modern living is pretty miserable on so many levels. People need escape,” Katrina admits. “Escapism like video games and TV and drugs.”

“It’s not miserable like uncomfortable, but it’s devoid of soul,” Sean chimes in.

“And avoidance of the self,” Katrina notes. “People are avoiding themselves.”

She stops speaking for a moment, as if in careful contemplation. Her eyes blue like waterfalls, her auburn hair and lengthy bangs frame her face. I notice for the first time the pattern on her black dress; cupcakes with cherries on top.

“All that’s really heavy,” she says finally. “But it’s part of our music and our philosophy because we want something better for our world. At the same time we’re really excited and happy and in love with life and playing music and experiencing things. We’re pretty functional in that regard.”

She sips from her drink.

“Us against the world,” she jokes.

We all laugh to lighten the mood, to reflect on problems that need fixing, and because it’s funny. Even if it is more truthful than anyone might like to admit. For all the awareness the band exudes on mankind’s failures, still another side emerges: a deeply rooted reverence for the natural world.

“We love camping,” Katrina says excitedly. “We try to do it on tour as much as possible.”

Passing through New Mexico on this latest tour, the band stopped at White Sands National Monument . The park, 275 square miles of desert, is the world’s largest gypsum dune field, mile after mile of spilling white sand and desolate beauty.

“The day we were there, I don’t know what the phenomenon is called, but there was this rainbow halo around the sun,” Katrina says. Her eyes grow wide in the dull red glow of the restaurant but you can tell she’s standing in that dune field reliving the memory. “There were these clouds through the middle of it that looked just like a crucifix at one point.”

In that moment, though they’re physically sitting right next to me, Dave and Sean are thousands of miles away with Katrina in that desert.

“We were all there, separated but walking around and then we heard this ‘whoosh’,” she imitates the sound of jet engines. “And we saw these two jet fighters fly across the sky. There’s a big military base there. Most of White Sands isn’t even open to the public. They use it for military testing.”

It’s a sobering thought, but then, Celebration is a band that uses its primal rhythms and cathartic performances to remind listeners that in spite of the forces we may be up against in this world, maybe all it takes to affect change is the energy to act. Perhaps it’s best summed up in the lyrics of “In This Land” from The Modern Tribe: “In this land we feel, real love can heal/ In this world of pollution/ and world of solutions.” Looks like the change may be up to us (and the whole community) after all.