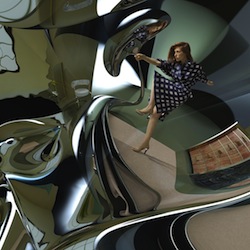 Cameron Mesirow has only been performing as Glasser for a few years, but she’s already beginning to cultivate a reputation as a shape shifter. In 2011, at Pitchfork’s SXSW showcase, Mesirow’s backing band — dressed in strange, modern-art coveralls — put in motion a dramatic set that began with the booming buzz of “Apply,” the Los Angeles-based singer and performer creeping up to the stage slowly, decked out in structured couture, making careful, slow movements like a predator sizing up its prey. Contrast that with her appearance at FYF Fest in Los Angeles this year, in which Mesirow performed in a stark, all-white uniform, backed by a lone percussionist, also dressed in white. In Austin, her game was all dazzle. Back in L.A., she traded it for a breathtaking understatement and insularity.

That dramatic shift is present on Glasser’s second album, Interiors. True to its name, it’s an album that looks inward, taking inspiration from both human relationships and actual architecture. There’s a distant, wintry feel about the album that stands in stark contrast to the verdant, springtime arrangements of her debut, Ring. And as such, the music on the album mirrors the isolation or introversion Mesirow explores, presenting a piece of music that’s beautiful, even deeply affecting, but much more withdrawn than its exuberant predecessor.

Contrast opening track “Shape” with 2010’s “Apply.” Where the latter opened Ring with a primal throb and Mesirow’s awesome vocal tics, here she’s guiding a mesmerizing, albeit low-key electronic pop song via meditations on her surroundings: “My home has no shape/ Nothing to sustain me/ But it keeps me safe/ From imagined pain.” A survey of the track titles on Interiors bears out the conceptual cohesion of the album — “Design,” “Landscape,” “Exposure” and three tracks title “Window,” which serve as transitions, opening up one phase of the album to the next. But more fascinating than the numerous interpretations of “interior” is how Mesirow finds ways of making such exuberant music in such muted tones and colors. “Forge,” for instance, twinkles and clatters with the drama of Björk’s Vespertine highlights, sped along by jungle-inspired drum patterns. There’s a desperate yearning for escape on the incredible “Dissect,” building to a commanding chorus that finds her lamenting, “Shackled to the window/ anything that opens.” And she returns to more danceable textures on “Keam Theme,” one of few genuine body-movers on Interiors, albeit one punctuated by a delicate melancholy, Mesirow asking, “How long — until I know you?”

Interiors does not have the immediately arresting qualities of its predecessor — and it’s that way by design. These songs are less direct, concerned more with the space inside them rather than an attempt to fill that space. As such, Interiors is an album that requires a few listens to fully grasp. But when that moment arrives, it comes as a sweet epiphany. Step inside Interiors and marvel at its architecture.