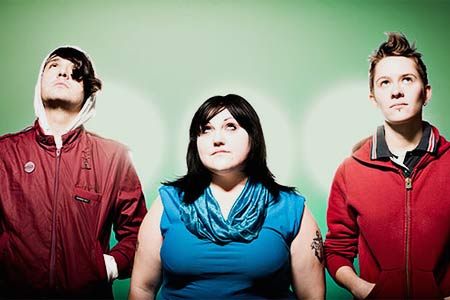 “There’s a Wal-Mart and a Waffle House and that’s where you hang out,” Beth Ditto, lead singer of indie punks the Gossip, said of her hometown, Searcy, Arkansas. In case you were wondering, the small Southern burg has never exactly been a punk rock hot bed.

Searcy’s population is about 19,000 and the nearest metropolitan area is Little Rock, which is 50 miles away. Being part of the counterculture in a town like Searcy was sometimes dangerous, Ditto said, and seemingly benign demonstrations of teenage rebellion, like mohawks and chain wallets, were against the dress code at Gossip guitarist Nathan Howdeshell’s high school. But it was the non-cosmopolitan climate that allowed the scene in Searcy to flourish, according to Ditto.

“It was fucking brilliant. There will never be anything like that again in my life,” Ditto said. “It was so DIY and so grassroots, there was no idea of what was cool at all.”

Having no tastemakers also meant the kids of Searcy could create their own definition of hip. “You weren’t happy because no one was really happy,” Ditto said of the scene. “When you were doing it, you didn’t realize you were apart of it. You were just chilling.”

Ditto is a long way from Searcy now, on tour to promote the Gossip’s fourth album Standing in the Way of Control, released in January on Kill Rock Stars. Produced by Fugazi guitarist Guy Picciotto, Standing in the Way of Control is made up of 10 tracks of utterly danceable punk rock created by Howdeshell, who goes by the name Brace Paine when playing with the Gossip, new drummer Hanna Blilie, and capped off by Ditto’s gargantuan voice; it’s deep and soulful with a vicious punk bite. On record, Ditto sounds like a gospel singer with a vendetta, Aretha Franklin raised in the Holy Church of Punk Rock.

When she was a kid, Ditto would listen to vocal heavy weights, such as Janis Joplin, Patsy Cline and Mama Cass but, while Ditto’s voice may share characteristics with these performers, she said she identifies with them more than she is influenced by them.

As Ditto grew older, she discovered Nirvana and other grunge bands. “You know you have radical potential when you search out subculture,” she said. She met a group of kids, Howdeshell included, who were creating their version of a scene in Searcy. Ditto credited what little scene existed to Howdeshell, who wore three-piece suits, even in the sweltering Arkansas August and ordered so many albums from Kill Rock Stars that they knew his name in the mail order department before the band started recording for the label.

After high school, Ditto moved to Olympia, Washington. She attributed the migration to her friend Jerry, the first out-of-the-closet kid she ever met. Being a gay teenager in Searcy was no easy task, where even Howdeshell was beat up for being gay, despite his own inherent heterosexuality. Ditto, who identifies as queer, found other out-teens and stuck with them.

“You know they’re going to grow up and be hair dressers and have really great lives,” Ditto said of the queer community she found solace in. Jerry moved to Olympia, following their friend Kathy Mendoca who left Arkansas to attend the progressive Evergreen State College.

“[Mendoca] wanted to move really fucking far away,” Ditto said, describing Mendoca, the Gossip’s original drummer, as the “academic one.” Olympia is a vastly different city than Searcy, with double the population and a thriving arts scene, due in part to the several record labels — Kill Rock Stars and K Records for instance, that call Olympia home.

Ditto, Howdeshell and Mendoca had no intention of starting the Gossip before moving to Olympia but after a little fooling around, gigs were booked and the Gossip was formed. Before the band even had a chance to record anything, Carrie Brownstein, of indie rock stalwarts Sleater-Kinney, asked the Gossip to support them on a national tour.

While being tour support for a band of Sleater-Kinney’s status would be daunting for any fledgling group, Ditto, then 19, didn’t see the tour that way, simply because she didn’t know any better. Ditto thought every scene was like the one she experienced in Olympia and, to a degree, Searcy.

“I didn’t realize that bands were a business,” she said. “I thought [the shows] were going to be a in a room in some kid’s house.”

Little did she know, she would be playing in to-capacity theaters across the country. Compared to other bands, the Gossip have had it pretty easy when it comes to touring. Ditto said that the Gossip has never had to endure what she called a “proper punk tour,” playing dive bars to unresponsive audiences, but that doesn’t mean the band itself has had it easy. “Searcy was so shitty to grow up in, we paid our dues,” she said.

Ditto’s naiveté has also made her an icon. Ditto is a vocal fat-activist and in interviews, she is not afraid to refer to herself as fat and has been known to rail against stick-thin starlets who perpetuate unhealthy body images. But Ditto said she didn’t intend to become a fat-icon.

“I came of age in Olympia that was this PC bubble of pure support,” Ditto said. “I thought that every punk and every scene was that fat-positive.” When Ditto found out that wasn’t necessarily true, she took it upon herself to change the national scene. “I feel, more than ever, I’m out to save every fat girl crying herself to sleep,” she said.

The gospel of the Gossip has been spread through a tireless touring and recording regimen. Their debut full-length, That’s Not What I Heard was released in 2001, with Arkansas Heat, Movement, and a live album, Undead in NYC, following at yearly intervals. But being in a band is a full-time gig and it proved to be too much for Mendoca.

“She wanted to be a midwife and we wanted to go on tour,” Ditto said. “Music was never her priority.” Ditto and Howdeshell then asked Mendoca to leave the Gossip. “It wasn’t the easiest thing for her to digest but eventually everything was fine,” Ditto said, adding that the old friends didn’t speak for a year before reconciling. Mendoca is now well on her way to becoming a midwife and her first birth is scheduled for May. To replace Mendoca, the remaining members of the Gossip looked to Bilie, from the Seattle band Shoplifting, who had toured with the Gossip when Mendoca was too busy to join.

Drummers aren’t the only part of the Gossip that has changed since their debut. The lesbian imagery that marked the lyrics of That’s Not What I Heard, has been toned down on subsequent releases. Ditto said that Standing in the Way of Control is still a “gay record,” in that the songs are still written about women and transgenders, but she has evolved as a songwriter.

“There’s a difference between subversive and clear,” she said of her lyrics. Ditto also attributed her changing lyrical style to herself growing as a person. “I’m not 18 and freshly out of the closet anymore,” she said. “There’s this weird rite of passage that you go through when you’re coming out of the closet, you talk about sex all of the time and make out with people at parties. If we just made records about getting it on, it would be boring,” Ditto said.

Overall, Standing in the Way of Control is a much more polished affair than previous releases, especially when compared to the dirty garage punk of That’s Not What I Heard.

“I think That’s Not What I Heard and Standing sound like two different bands, but I’m glad,” Ditto said. “Something the Gossip always wanted to do was change. We never wanted every album to sound the same, every song to sound the same.