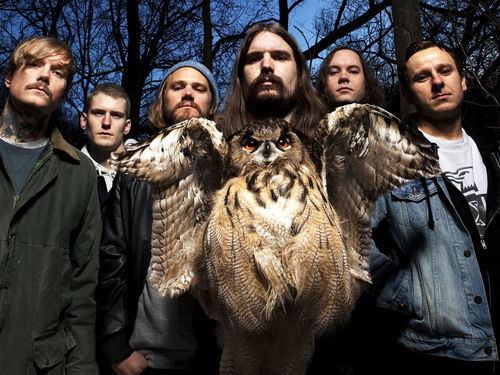 There are a lot of metal bands whose music might stop a party dead in its tracks, but the same can’t be said of Norwegian hardcore thrashers Kvelertak. Their self-titled debut album was, frankly, a party in and of itself — loud, uncompromising, but loads and loads of fun. It’s hard not to love a metal band whose M.O. is essentially to get bodies moving and beers flowing, but there’s a lot going on in any of their songs for them to live on long after the party is over.

“Spring Fra Livet,” the newly debuted track from upcoming album Meir, is just such a song. At its heart, it’s one of the roaring hardcore raveups that the band has become somewhat famous for, but amplified to an even greater degree. It’s not just a rocker, it’s an anthem, with soaring, climactic choruses and even some Southern rock boogie riffs. There are blast beats, as well, but there’s nothing “blackened” about this. Fear, evil and hopelessness have no place here. Kvelertak are making metal music for good times, meant to be enjoyed socially with lots of other sweaty folks. It’s no wonder that Foo Fighters brought them on tour.

[found on Meir, Roadrunner; out March 26 (Buy at Insound)]