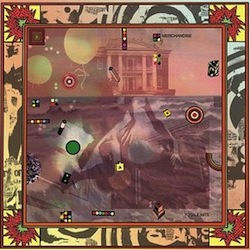 By the time Merchandise dropped last year’s breakthrough album Children of Desire, reaching an audience well outside the warehouse scene in their home in Tampa, they had already built up a pretty substantial back catalog of home-recorded obscurities and vinyl- or cassette-only releases. Whether or not to determine which of these is an “official” release is likely moot — such questions have become increasingly irrelevant in a shrinking industry, and even more so for a band like Merchandise, who seems to exist lateral to the grid, rather than directly on it. But there was something in Children of Desire that suggested a reach toward greater things. While heaped in distortion and mechanical beats, it felt more Smiths than Big Black, using abrasion only as an avenue through which to find melody.

Merchandise’s follow-up to Children of Desire, the five-song and 33-minute Totale Nite, takes another step even farther away from the group’s hardcore past, though not necessarily in the same direction. Each of the five tracks here, four of which are six minutes apiece or longer, has its own unique sound, the group giving an itchy display of genre nomadism, from punk to no wave, and from blues rock to gothic balladry. There’s a sense the band’s aim was to create a mixtape of songs that fit together in mood, if not necessarily in style. Whether or not that was the band’s intent, it comes together brilliantly.

Totale Nite is a much darker album than it’s predecessor, Merchandise spending much of the span of these dissonant dirges spiraling into strangely anxious spaces. Yet it begins with “Who Are You?”, the band’s buzzing, odd approximation of a bar-band blues stomp, complete with squealing wheezes of harmonica. When frontman Carson Cox sings “Today the sun rose/ Like the hand of God,” there’s almost a sense that the listener is in for an even brighter and sunnier outlook this time around. It doesn’t stay that way for long — with the chugging industrial-punk anthem “Anxiety’s Door,” the album grows darker and harsher quickly. It’s easily the album’s catchiest tune, returning to Cox’s refrain of “You’re the only one-uh,” but amid its infectious swirls of guitar, Cox describes a scene of men sleeping in the road and coming down with a case of the shakes. It’s the kind of post-punk song that offers dancing as a therapeutic option on itchy, sleepless nights.

Where “Anxiety’s Door” is Merchandise at their most accessibly jittery, “Totale Nite” is where they fuck it up a little, overlaying their skronky noise-rock pulse with sickly squeals of saxophone. It’s expertly done no-wavery, with guitars that shriek like Carlos Alomar on Bowie’s Scary Monsters, and a chorus that aims for transcendence in the midst of chaos. Yet for all the musical bells and whistles that make up the exciting journey through the album’s first 25 minutes, it’s closing track “Winter’s Dream” that stands as the most profound, Cox burying an older version of himself in a somber misfit-prom dirge. He croons, “The greatest joy I ever felt was killing him,” vividly suppressing a person he was, yet outgrew, highlighting a funeral that everyone will eventually be invited to, if never formally attend. It sounds heartbreaking, but there’s hope in the way Cox looks forward. There’s no situation so uncomfortable on Totale Nite that Merchandise can’t transform it into something greater.

Merchandise : After the End