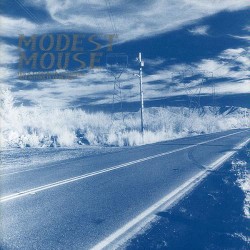 Back before the ship sank, Modest Mouse were so indie they were almost fictional. This was before the SAT-like `as Isaac Brock is to Modest Mouse, so Brad Lidge is to the Astros’ reference on SportsCenter which a flock of cynics, fairweather feathers and all, identify as the approximate moment when indie culture died. While Lidge subsequently lost his slider, Modest Mouse still hasn’t missed a trick. But that flawless pedigree of off-chart musicality and bonkers-to-brilliant eclecticism never distilled itself better than on This Is A Long Drive For Someone With Nothing To Think About, at once sort of the consummation of the so-called indie sound and a dramatic career statement for a band that’s never stopped thinking–even in the high altitude of the Billboard Top Five.

This Is A Long Drive For Someone With Nothing To Think About, which is also a long title for someone on a deadline, initiates Isaac Brock the blacktop soothsayer–it’s the record that got shit started about how certifiable he is/was, and the one that sounds the most like a man running out of his own head. Long Drive is a road record in more ways than one but the unifying thread is Brock’s matter-of-fact paranoia. Whether he’s getting up just about noon (“Custom Concern”), changing his mind so much he can’t even trust it (“Talking Shit About A Pretty Sunset”), or traveling swallowing dramamine (“Dramamine”) Brock pulls no punches on himself. The band falls in behind with the sort of scattered uniformity they’d become known for. At this point they were still tinkering with their trademarks but the mismatched odds and ends of their sound–guitar parts at weird angles, drumming that somehow sounds like it’s being played backward much of the time–were reeling themselves in bit by bit. Brock, meanwhile, sings as though he can’t believe himself, hobbling about like some rhapsodical drunk, zooming from zero to manic in 6.5 seconds.

Long Drive contains the two best Modest Mouse songs ever written–”Dramamine” and “Exit Does Not Exist,” both of which perfectly distill Brock’s lyrical genius and his rare gift for singing against the weight of his words. “Dramamine” builds a drum pattern that the band would revisit for a much bigger track in a much bigger year, “Ocean Breathes Salty” and encloses in it a guitar effect that sounds for all the world like a seagull. The song has such clean lines and such a serious jones for open spaces and wind through hair that you almost don’t notice the frustration in the closing words: “I’ve said what I said and you know what I mean/ but I still can’t focus on anything.” “Exit Does Not Exist” is a hit-and-run, a broken mirror for bad love, expressed in Brock’s most brutish sideways-shriek. “You look out of breath and me like I’m faking,” he yelps over an out-of control rhythm: “As a matter of fact I don’t recall this photo being taken/ you don’t actually exist so I just started shaking.” On neither track does Brock sound like he wants you to believe how affected he is by the particular weather he’s decrying–which of course makes you totally without question believe it.

And I can’t even write about “Space Travel Is Boring” without welling up.

There’s also, on Long Drive, the dumbest song the band’s done yet in “Breakthrough” (“Five six six six/ running `round the neighborhood/ pejorative, `jinx’.“) The fact that it’s set near the top of the record is almost it’s own reward, a thrown-down glove for the weak-hearted. Melodically of course, it kind of rocks, which is pretty much the rule. About here is where I say `as debuts go’ or something like it: so as debuts go, This Is A Long Drive For Someone With Nothing To Think About And Also A Long Title For Someone On A Deadline locates the general gestalt of one of rock’s most panoramic squads. It’s schizo and well-adapted, jangly and somber, aggrieved and effortless. Most of all it’s built to last. It just wasn’t on SportsCenter, that’s all.

Built To Spill – There’s Nothing Wrong With Love