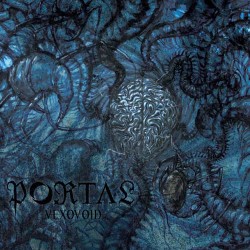 Australia’s Portal knows ugly. They revel in it. They celebrate it. They consume, devour and regurgitate it in ways that few other metal bands might have ever even considered. That’s saying a lot — in the world of death metal, ugly reigns supreme, and when one band is able to achieve a level of such guttural, bowel-obstructing horror, then that’s something worthy of applause, even if the “why” of it sometimes eludes easy explanation. Yet for those well indoctrinated into the ways of extreme metal, that riposte comes pretty easily — because they can.

Ostensibly a death metal band, Portal has delivered their rotting, wretched muck in malleable forms, be it crusty, blackened or sludge-caked, which is made all the more terrifying through the use of their intimidating, costumed state presence. (Their lead vocalist, The Curator, has been known to wear a structural contraption on his head while performing.) Yet for as menacingly grotesque as Portal gets, there’s a level of refinement that has occurred over the course of their career, which has reached an impressive level of intensity on fourth album Vexovoid. It’s still a version of Portal as they were on Outre or Swarth, but distilled and reduced into a potent and lethal solution.

Impenetrability remains a factor with Vexovoid, and at various points throughout the course of the album, it can be somewhat difficult to discern just what the holy fuck is happening. That seems very likely the point given the level of influence the band takes from horror, particularly H.P. Lovecraft. Disorientation coupled with a frontal assault of menacing and violent sounds makes for a pretty unsettling listening experience. That said, one need not dig too deep to find some incredible sonic treats at the ready beneath the tornado of grime swirling about. “Plasm” begins as one of the album’s densest creations, but pulls away the guitars and drums to leave an even creepier ambient hum in its final two minutes. Yet “Orbmorphia” finds the band taking a different, even more thrilling tack via escalating, Gorguts-style mathematical riff shrapnel. “Curtain” explodes from a slow, foreboding doom into a blast-beat clusterfuck of epic proportions, and on opener “Kilter,” the most intensely thrilling of the bunch, minor-key horror soundtrack arpeggios tumble over a vicious, blackened rumble.

Whether one has a taste for the putrid and brackish has a strong bearing on whether or not he or she will gravitate toward the viciousness Portal conjures. But then again, Vexovoid pretty much kicks ass, in as unapproachable a manner as possible, a testament to pushing extreme sounds well past the safety buffer. It’s a triumph of ugly.

Shadow of the Horns: 20 Years of Southern Lord