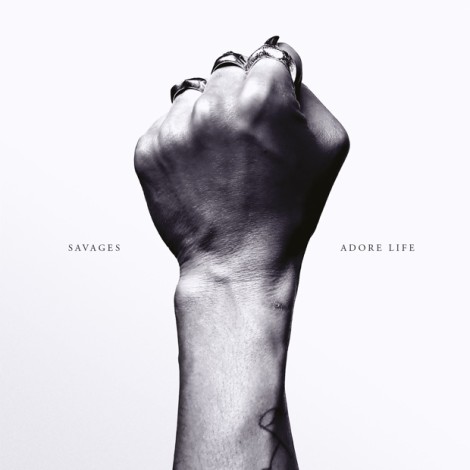 Savages spent most of 2015 in a state of transparency. While working on the follow-up to their urgent, visceral debut album Silence Yourself, the London post-punk group pulled back the veil and revealed their works in progress in a series of live shows, most notably a New York City residency booked for the purpose of bringing their audience into the workshop. It’s not necessarily unusual for a band to work out material on the road, but for Savages it marked a pivotal change from the mystique they cultivated earlier in their career. It’s easy to seem interesting when you reveal very little about yourself, but opening yourself up and letting others in on that secret has the potential to offer a greater reward, despite the risk.

For such a potentially intimate moment between artist and fan, Savages still seemed to be the ones wielding all the power, the highlights of each live set arriving like a punch to the stomach. They sounded louder, dirtier, more abrasive. And not all of the songs that Savages premiered ended up on their second album, Adore Life, but despite the band’s intentions to draw critique and feedback, what they submitted felt both intimidating and awesome. “We want your honest response,” singer Jehnny Beth said at their January 24th show at Brooklyn’s St. Vitus. “If it’s crap, you throw things at us.” Only a few blistering, blissfully intense songs after that, she reminded everyone, “You aren’t throwing anything.”

This love-is-a-battlefield paradox is the central conflict that binds the songs on Adore Life together. It’s an album of love songs, but they’re harsh and tormented, violent and seething. It feels dangerous, and it absolutely should—what’s more dangerous than opening yourself up to someone, after all? So it’s not just cognitive dissonance when Beth declares “Love is the answer” in the middle of what feels like their most brutal song. Love even takes on the property of a ferocious beast in “T.I.W.Y.G.“, a blast-beat addled post-punk destroyer punctuated with cries of “This is what you get when you mess with love!” But it’s as much an addiction as it is a monster: “Suffering, straight from the gods/ No medicine, no drugs.” And in the darkly atmospheric “Adore,” Beth even finds affection in the fucked-up state of the world, asking, “Is it human to adore life?”

Adore Life is as much about opening up the band’s sound as it is exploring emotional vulnerabilities, and for all the risks they’ve taken leading up to the album, their sonic explorations are every bit as bold. There are slinky and danceable post-punk grooves in “Sad Person” and “Evil,” and an eerily atmospheric burlesque in the slow-mo bounce of “Adore.” Savages mine an even deeper groove on Adore Life, but it manifests in unexpected ways, whether wrapped in dreamy shoegaze noir in “Slowing Down the World” or licked by the flames of a dense squall of lush guitar noise on “I Need Something New.” Yet where there’s an intricate composition, a more visceral and guttural blaster isn’t far behind, and the thrill of a song like “T.I.W.Y.G.” is a reminder of just how good the latter feels.

Savages are consumed by the concept of love in Adore Life, but it’s not an ideal or even a plainspoken, every day kind of love. It’s revolutionary. In a press released in conjunction with the release of their video for “The Answer,” the band said, “We’ve observed our audience all around the world and noticed that something is happening. People want to be pushed to do good, or to be good, or just to feel good.” Adore Life is the full-length version of that push and then some. It’s a kick in the ass.