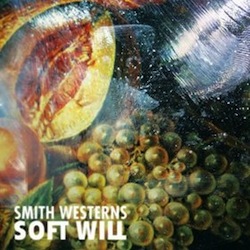 Through a formidable combination of glam and garage rock, the Smith Westerns’ Dye It Blonde was an exhilarating album of pure power pop. A cursory look at song titles like “All Die Young” and “Weekend” clearly spelled out Smith Westerns’ get-lost-in-the-moment appeal. Even the album’s darker moments were still fun, but I guess we all have to grow up at some point, and the party is definitely over on Soft Will. Taking on a much more muted tone, albeit one still very much rooted in glam rock traditions, but now with more of dream pop flair, it’s an album of much subtler pleasures.

It’s true that Smith Westerns didn’t exactly smack of originality on Dye It Blonde, but the effervescent personality of the band was so alive and well that it was pretty easy to ignore. To overanalyze the band’s power pop would be completely missing the point. Unfortunately, with some of the band’s dynamic energy missing, Soft Will isn’t afforded such luxuries. This is the work of a more mature band, and in this case, a slightly less satisfying one.

It seems appropriate that opener “3am Spiritual” describes what is likely a washed up actor or actress, and one that’s not that fun, as if to denote the shift in tone. The first half of the song isn’t all that memorable, but when things open up at the bridge it’s awfully enjoyable and eventually the song concludes with a pretty dream pop coda. There’s a brief nod to their more glam-inspired past thrown in there for a few seconds with the guitar lead, but by and large, the band spells out their new intentions pretty clearly from the get go.

When the band really let go of their past on Soft Will it can be very satisfying. One of the album’s best moments, “XXIII,” is also one where they finally just let themselves orbit the Earth. A bit of a cross between Dark Side of the Moon and Supergrass’ self-titled album, it’s an instrumental that completely relinquishes all pop pretenses and the band just allow themselves to explore space for a few minutes.  “Only Natural”, another highlight, successfully trades in power chords for a steady acoustic groove and sparkling synths.  Then again, “Best Friend” may just be the best song on the record and it’s a ballad in the same vein as Dye It Blonde’s closer “Dye the World.”

Therein lies the great frustration with Soft Will; by and large it’s a pretty good album, it’s just not a very exciting one. It’s hard to fault a band for simply writing a set of good, toned down songs, but one can’t help but feel that if the melodies didn’t feel quite so familiar it would be a little easier to let the lack of thrills go. That said, Smith Westerns certainly have a lot going for them and it will be interesting to see where their next album takes them.