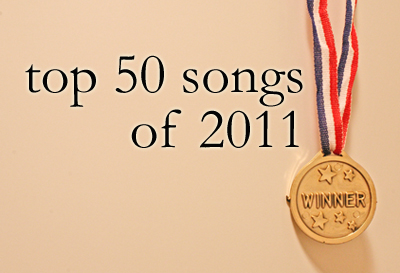 Consensus can be a difficult thing to build among a group of critics. In any given group, there’s bound to be a certain faction that prefers dance music, another that sticks more closely to hip-hop, and a good many who still find plenty to love about a good guitar riff. We share thoughts on our favorites, swap recommendations, make a few introductions, and in the end, come up with a mish-mash of sounds that run a wide range of styles and genres. We debated and deliberated and after a long series of closed-door negotiations, assembled a list of songs that we deem worthy for publication. We can’t guarantee these songs accurately “capture the zeitgeist,” or that future generations will view them as favorably as we do now. But what we do know is that these 50 tunes stuck with us through a year of surprises, innovation, absurdity and curiosity. And if you’re looking for one satisfying playlist of excellent songs to summarize 2011, we hope this one does the trick (and each song is linked to a stream or video). Now, on to the list!

Update: Listen to our Best of 2011 playlist on Spotify!

Daniel Martin-McCormick made quite a splash with his Ital moniker in 2011, carrying his attention to sound’s capacity for bewitchment, already displayed in his work with Mi Ami and as Sex Worker, over into productions with at least one and a half feet firmly planted in the world of electronic dance music. But that half a foot that is elsewhere, delirious with noise and the necessity of derangement, is what made his productions places to be returned to again and again. That is especially true of “Culture Clubs,” an eight and a half minute float among slurring, aquamarine melodies and scattershot beats that always seems to arrive at a different and differently desirable point of debarkation. – Tyler Parks

While earnestness and hip-hop aren’t always the most natural, nor most appealing of combinations Mississippi’s Big K.R.I.T. does sincere in a way that carries heavy emotional weight, and it jams. Return of 4eva highlight “Dreamin’,” a wide-eyed meditation on drive and K.R.I.T.’s profound relationship to hip-hop, recalls Notorious B.I.G.’s “Juicy” or Nas’ “If I Ruled the World” while simultaneously name checking UGK and Scarface. Sure, it’s motivational speaking set to a chill beat, but central to K.R.I.T.’s narrative is his minimal pretense, Regular Joe charm, confessing “I ain’t rappin’ `bout dope, nor did I sell it/ I guess the story of a country boy just ain’t compelling.” Anyone who hears this song is likely to reassure K.R.I.T. that’s just not true. – Jeff Terich

48. Future Islands – “Give Us the Wind” (Thrill Jockey)
[from On the Water] Buy at iTunes

Yearning, confusion, defiance and self-doubt – all of these are common themes in pop music, a legacy of lonely misfits carried on from decade to decade, Pet Sounds to Pat Benatar. Future Islands’ “Give Us the Wind” encapsulates these ideas with a wisdom and intensity generally unheard in a four-minute synth pop ballad. Perhaps it’s the remarkably booming and carefully enunciated cadence of singer Samuel Herring, whose voice approximates David Bowie reciting a Greek Tragedy. But his words are as incisively written as they are delivered, as he offers insights such as “When seeking truth the answer is the road,” and beckons the hardships that yield the self realization we don’t always crave but sometimes desperately need: “Fight through the wind, fight through the rain, fight through the storm.” This beautiful miracle of a song might very well change your life, or hell, even save it. – Jeff Terich

If Lykke Li came on just a little too strong with “Get Some,” a sexually aggressive stomp with accompanying weird pagan ritual video, “I Follow Rivers” found just the right ratio of sultry darkness and saccharine-free emotion. Li, here, doesn’t bother going overboard with double or single entendres, nor does she unload a litany of grievances. She merely offers a simple and straightforward message of devotion: “You’re my river running high/ run deep, run wide…I follow, I follow you, deep sea, baby.” She doesn’t bother trying to fill every space with needless verbosity, and her brief but potent words resonate all the deeper because of that, leaving ample room for Bjorn Yttling’s haunting and booming production to leave its impact. – Jeff Terich

“Where Your Mind Goes” begins with 12 seconds of clarity before the crisp drum kicks are washed over with the fog of warped guitar and bass — much like Ty Segall’s home city of San Francisco on cool summer morning. The song is so heavy and warped that I’ve often caught myself scrunching my face with pleasure a la the canine companion on the album’s cover. This is a track that rocks hard and can’t be denied if you’re caught in its wake. Segall’s voice guides the listener “over the ocean, across the sea” and through other incomprehensive, yet infectious lyrics. Without context, this song could blend in with either the garage rock classics from decades past, or the progressive psychedelic jams garnering attention today. One thing is for sure– wherever Segall goes, I’m following. – Donny Giovannini

After an unfair backlash followed by an extended silence from the band, it was tempting to think The Rapture were primed to just fade away. But then they went and dropped “How Deep Is Your Love?” on us and suddenly they seemed worth dancing to all over again. Starting out with just a thumping bass and circulating piano, the track patiently builds into one of the most infectious grooves to come out this year. By the song’s end, it’s an irresistible blur of buzzing synths, cowbells and a wailing sax. For anyone who had long counted the Rapture out, “How Deep Is Your Love?” was a welcome reminder as to why the band was once at the top of the DFA heap. – Chris Karman

There’s a difference between music that is creepy and music that creeps out the listener. The former is born out of circumstances, personalities, nature or all three while the latter is more deliberate. It’s about you, the listener, in relation to the artist, the song, the album, etc., and what’s expected of you when you’re in the artist’s grasp. Many artists go this route; in recent years few have done it as well as Zola Jesus has done it. Her sultry-to-frantic, seething-to-sultry vocal style alone is enough to draw the listener in and stay there, doing her little dance of submission to the beat of her sparse electronic soundscapes. I don’t know if that’s necessarily happiness in slavery but it passes the time just as well as anything else we’ve got going. – Chris Morgan

“Amor Fati” is an experience to get lost in; it’s not so much designed for heavy analysis. It may sound clichéd, but the rapturous bliss triggered by the track’s floating synths and gliding harmonies can’t be properly accounted for in words. Steeped in higher production values, Washed Out, AKA Ernest Greene, managed to transcend the appropriate, yet date-stamped chillwave tag he was originally saddled with. For as much as I liked Washed Out’s breakthrough single “Feel it All Around,” I never would have guessed that there was an even better second act. Greene’s music just felt a little too close to the genre he helped define. Amazingly, “Amor Fati” may not be as immediate as that song, but stick with it and it’s arguably more satisfying. – Chris Karman

I don’t know Abel Tesfaye, but I don’t trust him. The 21-year-old Canadian R&B singer keeps his identity more or less anonymous, which, when coupled with his somewhat unsettling lyrical narratives of dark nights of intoxication, sex and twinges of anxious terror, gives the impression that anyone who comes to his apartment could end up as a link in a human centipede. The truth is more likely a brilliant artistic decision, The Weeknd’s strangely sinister downtempo jams leaving more to the imagination and, therefore, deepened curiosity where over sharing (like his buddy Drake) would only ruin a good thing. I do know, however, that he can craft a mysterious and sexy atmosphere like no other, as on “What You Need,” a hypnotic space-age boudoir rendezvous for the hours just after the wee hours, when buzzes fade but judgment is still less than optimal. Twinkling synths lend a touch of intrigue to his desperate loverman cries of “And I’m-a love you girl.” It’s enough to get you drunk on impulse and atmosphere alone. But I still wouldn’t trust him. – Jeff Terich

Almost every War on Drugs song is about traveling to some extent – driving, escaping, going somewhere. “Baby Missiles” is no exception, a dense and propulsive rocker compelled by the spirit of movement and soaring at maximum speed. Adam Granduciel doesn’t explicitly mention hitting the highway, but the song’s heady shoegazer textures and surging roots rock rhythms speak volumes on their own. It’s a road trip encapsulated in three minutes, a pocket-sized slice of freedom, and Granduciel’s falsetto “whoo-hoos” perfectly express that sensation of liberation. Rock `n’ roll doesn’t need a destination, but it should take you somewhere. Hop in and take a ride. – Jeff Terich