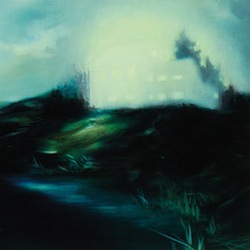 So we seem to have a pattern emerging here; every three years we’re treated to a solid full-length chock full of oceanic shoegaze from Montreal’s The Besnard Lakes. Four albums in and it seems like the band is bordering on predictable. Of course, putting it so cynically isn’t really fair to such a consistently rewarding band. And as it turns out, consistency is definitely at the top of the list when it comes to The Besnard Lakes’ strengths. That the band has dialed in a sound that they seem to have committed to is nothing to complain about; it’s not as though they have been rewriting the same record over and over again. They have simply built a sturdy reputation revolving around patient builds, effervescent melodies and careening guitar swells. Until In Excess, Imperceptible UFO doesn’t deviate from what we’ve come to expect from the band, but it does find the band really exploring those patient builds in perhaps even greater depth than on past records.

If The Besnard Lakes Are the Roaring Night was a more direct take on the band’s attack, Until In Excess, Imperceptible UFO takes the opposite route, focusing instead on slow climaxes and overall slower tempos. “Alamogordo” sees 45 seconds go by before any percussion is even heard. But the album’s overall lack of immediacy also happens to be one of its greatest strengths, challenging the listener to invest more attention to reap the rewards from its measured pace. And in truth, this, in effect, showcases what The Besnard Lakes have always excelled at. Just as the opener “46 Satires” displays the awesome power they’re capable of as its massive echoing synths and guitars wash over the listener. Elsewhere, “And Her Eyes Were Painted Gold” is graced with perfect Phil Spector-inspired harmonies, highlighting an inspiration that’s never been too far beneath the surface for the band.

In true shoegaze fashion, Until In Excess seems to be more concentrated on balancing beauty with grand bursts of reverberating overdrive. Songs like the “The Specter” see-saw between majestic piano, gentle riffs and ambient synths and slow motion sonic detonations. If the band never quite reaches the heights of their greatest work to date, their sophomore effort The Besnard Lakes Are The Dark Horse, it’s certainly as strong as its predecessor, The Besnard Lakes Are The Roaring Night. Dark Horse may have contained their strongest set of songs to date, but it also benefited from the fact that it was the band’s first brush with greatness. It might not be reasonable to expect those heights to be scaled again; however, even as the band is content finding new avenues to essentially just be The Besnard Lakes, they’re still a force to be reckoned with.