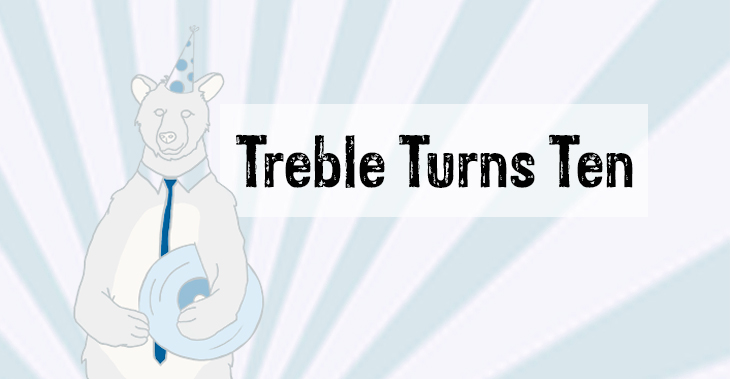 In October of 2003, there were some curious, troubling things happening in California. A good portion of its southern half was covered in flame or smoke, thanks to the largest wildfire in California history. It burned through much of San Diego, with thick plumes of smoke billowing on up to Los Angeles and Orange counties. Meanwhile, a frenzied and questionable recall process led to the baffling election of Arnold Schwarzenegger as governor. It was a strange month, looking back. But one positive thing came out of California in October of 2003 — Treble.

In my junior year of college, at only 21 years old, I launched the site with the help of my brothers — Terrance and Matt — partly as a fun project, and partly as a way to provide a different viewpoint as those being expressed on more mainstream magazines and websites (music and MP3 blogs still weren’t the norm as of yet). Our first articles were mostly experiments, creative writing exercises, really. And at the time, the concept wasn’t completely fleshed out. We were a music website, certainly, but we had some columns on film and books, and even some general pop culture ephemera.

Within a year, there were about 10 to 12 of us contributing — however irregularly — to this new, mostly fresh online canvas. The writing was raw, the opinions were genuine, and the passion for music was overflowing. And as momentum picked up, soon enough we’d begin to see more people getting involved and getting interested. We started to do more serious articles and interviews — with at least one Grammy winner! — and while our focus narrowed in on music, the music we covered broadened, starting with niche indie rock records and eventually expanding to cover pop, hip-hop, soul/R&B, metal, hardcore, ambient, experimental, noise — you name it. And that’s one thing that hasn’t changed since. Nothing, strictly speaking, is off limits. Of course, it’s extremely difficult to cover everything.

While growth and evolution for Treble has been gradual, it’s come a long way from where it started. Many writers have come and gone, and quite a few of them have gone on to do some impressive things. A few went into law. One opened a gallery. Several are teachers. Some are publicists. And quite a few have written for many other significant publications, including American Songwriter, The AV Club, Boston Phoenix, Philadelphia Weekly, Paste, San Diego CityBeat, Spin and Rolling Stone. And yet, Treble’s community remains as tight as ever, even if commitments have shifted in the meantime.

That’s how I’ve always viewed Treble — as a community. Not a megaphone or a stone tablet. We have opinions, and certainly a lot to say, but we’d rather open up conversations about music than to simply broadcast one point of view. We don’t always agree with each other, even — remember that the next time one of our year-end lists doesn’t look like you want it to. Treble has grown up a lot in 10 years, but that core idea of a community of people passionate about music remains as it was when it began. These last 10 years have been a blast, so let’s raise a glass to the next 10. Thanks for reading!

To celebrate Treble’s 10-year anniversary, we’re posting a series of articles that reflect the last 10 years of music, including a compilation of some of our most significant articles, some reflections on trends and personal memories and — here’s the big one(s) — a series of essays on significant albums released between 2003 and 2013. We’ve got a lot of ground to cover, so keep reading throughout the next couple weeks as we celebrate our Tin anniversary as best we can — with lots of good stuff for you to read.

Hall of Fame: Radiohead – In Rainbows

Hall of Fame: Sleater-Kinney – The Woods