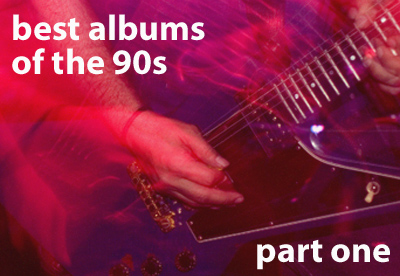 11. Built To Spill – There’s Nothing Wrong With Love (Up)

I have met two kinds of Built to Spill fans in my life. There are those that love every bit of output from the band, from their early Dinosaur Jr.-like tracks to their more recent experimental guitar rock. And then there are those who love There’s Nothing Wrong With Love. I am one of the latter. It’s not that I don’t enjoy any of their other albums; it’s just that none of them have captured my attention and adoration as much as that 1994 album from Up Records. Ben Folds once said, in a recording used for their rarities album, that he sometimes wished he could just be in a Built to Spill cover band, yet specifically chose a song from TNWWL to play. That’s probably because TNWWL is a cut above the rest. Not only does it contain BtS’ most memorable songs, but served as the blueprint for all Northwestern rock to come. – Terrance Terich

Roman Candle is sometimes placed into a lesser category than Smith’s subsequent releases, but this debut is much more than just a prior release to Smith’s revelatory self-titled second album. Roman Candle is a bright spark, one that has not diminished since its release or the loss of its author. If anything, it burns brighter, an ember of who Elliott Smith was and what he’d become, an incandescent outburst that burned so pretty but so briefly. – Hubert Vigilla

Considering how much of the ’90s the Gallagher brothers spent feuding, drinking, or in the case of Liam, not bothering to show up, it’s sometimes easy to forget that, without them, America probably wouldn’t have caught on to the notion of Britpop. The catalyst was Definitely Maybe, a record that kicked off the post-grunge era with more than a few nods to the Beatles and the Stones, and even…Coca-Cola? Yep. And Noel Gallagher wasn’t the least bit ashamed of any hero worship or melody borrowing, but when it comes right down to it, Definitely Maybe stands as a truly amazing collection of songs, proving that perhaps being 100 percent original is, if not impossible, entirely overrated. “Supersonic” rocked hard while maximizing the hooks, and “Slide Away” is epic and heroic, as stunning a track as they’ve ever written. But let’s not forget “Live Forever,” the breakout hit that broke them in the States, and is good enough to make you feel immortal, at least for those 4 minutes. – Jeff Terich

Unfairly pigeon-holed as lo-fi, Robert Pollard displays far grander ambitions on his band’s magnum opus. At 20 songs, and clocking in at just over half an hour, Bee Thousand is a mini-epic, rising above its primitive sound and production to reveal some of the best, most underrated pop hooks of the decade. You’d be hard-pressed to find a more instantly gratifying and addictive song that year than “Echos Myron.” Meanwhile, Pollard’s sci-fi lyrics alternately recall Frank Black’s latter day Pixie explorations and predict the Flaming Lips’ dealings with robots nearly ten years later. – Robert Huff

7. Jawbox – For Your Own Special Sweetheart (Atlantic)

Abrasion and melody have never been so inexplicably intertwined as they are on Jawbox’s For Your Own Special Sweetheart. It’s an album that balances extremes, not in the way that Cave-In or Deerhunter or Sonic Youth do, but rather by ensuring that behind every scrape of a nickel-wound string and every dissonant clang, there is a brilliant pop melody. When J. Robbins screeches “this code is cracked!” over a feedback-driven rumble on “FF=66,” one hardly suspects the soaring hooks to come shortly thereafter. “Savory” turns the unlikeliest of elements into one of the most gorgeous singles of the post-hardcore era. And buried at the end, “Reel” and “U-Trau” are just examples of the intricate and abrasive perfection that Jawbox was not only capable of, but displayed repeatedly. Who could have imagined that loud, aggressive rock music could be so sophisticated and refined? – Jeff Terich

Regardless of where it ranks in Blur’s back catalogue (it’s one of their good ones for sure), Parklife is notable for containing plentiful moments of glaring accessibility that, in the UK at least, turned them into pop stars in the sense of sitting alongside Take That and Nirvana. They moved along from the brilliant Modern Life Is Rubbish by upping the buoyancy and pitching the kind of happy-gone-frustrated Anglicism practiced by Ray Davies and Pete Townshend in the 1960s to work as a winning 1990s pop product. – Tom Lee

I remember hearing The Downward Spiral for the first time not long after its release in 1994. My older sister was careful to hide the ‘parental advisory‘ sticker from my mother’s prying eyes, though I’m sure mom suspected (as well she should have) that sis was corrupting my ten-year-old mind. The song she played, “Piggy”—one of the albums’ more serenely sinister tracks—initially sounds tame until the lyrics decry of police brutality. Reznor’s disaffected intonation verges on nonchalant as he delivers the apathetic mantra, “nothing can stop me now ’cause I don’t care anymore.” Though I didn’t fully comprehend the desperate resignation offered in so stark a line back then, I still felt a little uncomfortable. Fourteen years later the sentiment stings sharper still. – Mars Simpson

Weezer’s eponymous debut album is one that should be included in a time capsule of music that defined the 1990s. Weezer made their mark by breaking from the grunge that dominated the musical landscape of the time in favor of riff-driven pop flying under the banner of alternative rock. Singer Rivers Cuomo captivates as the epitome of a nerd and the bumbling lyrical references of ineptitude, insecurity and inadequacy bring forth throngs of fans that can understand what it is to have shortcomings. Songs like “Buddy Holly” and “Undone (The Sweater Song)” are lighthearted gems that illustrate Weezer’s knack for relating to those who are young and uncertain. – Tyler Weir

All attempts to fix Portishead in to genre or movement were fated to failure. They drug up fragments of 20th century music and melded them to new technological possibilities in a way that was inimitable then and inimitable now. Songs like “Sour Times” and “Wandering Star” are both organic and synthetic to the point where the distinctions lose all traction, where they come apart irreconcilably in the mysterious magnetism of the music. That the former became a sort of anti-anthem, a paean to the dark attraction of sadness and longing, crystallizes their appeal to both past and present. – Tyler Parks

It’s fitting that Crooked Rain, Crooked Rain opens with a sloppy little warm up before kicking into “Silence Kit.” The essential Pavement album signified a major shift in the band and the beginning of a brand new era. Gone was original drummer Gary Young; that wild man, that lush, that gonzo who handed out cabbages and mashed potatoes to fans at shows. In was the rest of official line-up: drummer Steve West, bassist Mark Ibold, and fifth Pavementeer (for lack of a better term) Bob Nastanovich. In short, while Slanted and Enchanted was Pavement’s debut album, Crooked Rain, Crooked Rain was the debut of Pavement. – Hubert Vigilla

I can’t pick a favorite track from Grace. Over the last fourteen years in which I’ve been keeping the album in constant rotation, that honor has changed in almost as many times as I’ve pressed play. There’s the balance of unbridled ferocity and restrained beauty in “Mojo Pin.” There are the eerie predictions of impending death of the title track to go along with hypnotic choruses and jangling chords. There’s the absolutely stunning version of the standard, “Lilac Wine,” most likely inspired by a version from Buckley’s hero Nina Simone. There’s the frenetic last minute addition to the tracklisting, “So Real,” a song that truly captures Buckley’s vocal range. There’s Buckley’s version of a Middle English hymn in “Corpus Christi Carol,” long before Sting took up the lute and performed his own album of these types of songs. I cannot begin to describe how angelic Buckley’s voice is on this particular track. Then there are the closers, the first being the hard rocking “Eternal Life,” a song that proves Buckley had as much talent for angry guitar rock as tender ballads. “Dream Brother” mesmerizes with its psychedelic undertones and lyrical warnings masked as Middle Eastern chants. – Terrance Terich