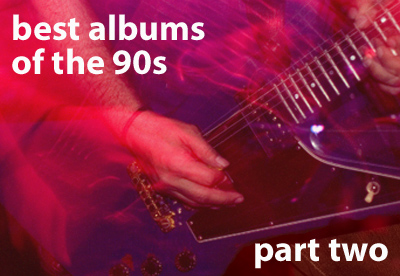 This week begins the second half of our extra-large list of our Best Albums of the ’90s. This second half of the list covers the span between 1995 and 1999, so we hope you’re ready to continue on the overwhelming journey through the decade.

Tricky once suggested to journalists that, since he invented his own style of music, it should be referred to as “Tricky hop” rather than “trip-hop.” While his suggestion doesn’t quite roll off the tongue, he does have a point. Once known for lending vocals to Massive Attack tracks, Tricky’s debut explosion on Maxinquaye was something far weirder and more incendiary than that band’s dark, but chill trip-hop vibe. Paired up with former significant other Martina Topley-Bird, Tricky’s underwater android growl played perfect foil to her heavenly voice, as the two sensually grappled atop Bomb Squad-influenced beat frenzies and…is that a sample from Michael Jackson’s “Bad”? Aside from the Isaac Hayes sampling “Hell is Around the Corner” (same sample as “Glory Box” mind you), there is little here that fits in snugly alongside much else in the Bristol scene. “Aftermath” is heavy and abrasive noise/blues/hip-hop, while “Ponderosa” hits heavy with its exotic, clacking beats. The twisted visionary even recreated Public Enemy’s “Black Steel in the Hour of Chaos” as a soaring hard rock song, with Topley-Bird in Chuck D’s seat; now that’s ballsy. – Jeff Terich

I can’t think of an album quite like Elastica’s first. Possessing at least a 50 percent plus ratio of potential singles to songs (give me two pints and I’ll be happy to present a convincing argument for most of them) over 15 tracks, I wont refute that they’ve probably heard Wire and several others. I’ll also be happy to point out that every song here sounds interesting, commercially friendly, and like no other band could have written it. Elastica are certainly no more deserving of an accusatory glance than Oasis (Beatles/Bolan, Pistols/Page), or the Libertines (Beatles, either producer’s band). In my opinion, this is the best of those three debuts, and I love or am impressed by the others. – Tom Lee

Formed in Manchester at the height of the city’s influential ‘Madchester‘ era (defined by the psychedelic drugs that fueled its inception as much as the celebratory combination of dance and rock music its flag bearers championed), The Chemical Brothers discovered an innovative way of bringing the guitar to the club floor. Of course this didn’t actually involve guitars so much as it did samples of guitars, along with drum machines, loops, spot-on sequencing, and a whole host of siren calls (“One Too Many Mornings,” “Alive Alone”). Tracing a neon glow-stick through its many electronic influences, acid house, funky breaks and trip hop to name a few, their debut out-raves any of the dance beats that had yet dropped upon its release. – Mars Simpson

Had he embraced the idea of engineering advances past the four-track earlier in his career, Robert Pollard may have enjoyed the kind of chart success that has eluded him his entire, hyper-prolific life. Then again, had he done just that we would have been denied the lo-fi pleasures of gems such as Alien Lanes. The perfect companion piece to the infallible Bee Thousand, the release continues in the gleeful slop-pop vein and solidifies Pollard’s position as the king of one minute jangle rock in the court of independent records. Later releases would cater to a more polished sound, but Alien Lanes marked some of the best and brightest spots of this elder statesman’s storied and brilliant career that shows no signs of fatigue in sight. Beat that, Ryan Adams. – Kevin Falahee

To Bring You My Love was simply PJ Harvey’s baptismal leap in the Delta water, before her storied commercial rebirth Stories From the City, Stories From the Sea. Thanks to the stellar production by Flood and John Parrish you can hear Harvey dive inside the lyrics of her Southern-inspired tides, searching for creative salvation within the sinister soul of The American Blues. During “Down By The Water,” as Harvey sings “Little fish big fish swimming in the water/Come back here, man, gimme my daughter,” you can hear lyrical odes to one of her heroes while growing up, Leadbelly, particularly his classic tale “Salty Dog.” And you can hear these same blues influence, throughout, that Polly Jean was reared on while growing up in Dorset, England. – Adrian Cepeda

The thing that still surprises and, probably is the reason for Wowee Zowee‘s special place in the hearts of devotees, is the sheer freedom that Pavement exudes on this release. Where debut Slanted and Enchanted sounded brilliantly spasticated and like a bear squashed into a jam jar, Wowee Zowee is that same bear frolicking in a much wider open space. The squelches of jazzy cack-handed wah-guitar all over the background of “Rattled By The Rush,” the sheer intense pop of “AT&T,” the hushed Motown madness of “Grave Architecture”… this is what it means to be free. But with that power comes great responsibility, and Pavement managed to just about get through the whole record without making any of it sound difficult or indulgent. But that’s the slacker charm, yeah? Being massively clever and not telling anyone? Yeah. – Daniel Ross

Though considered by many to be the bloated afterbirth of the Smashing Pumpkin’s grand breakthrough, Siamese Dream, it’s a fault in judgment to look on Mellon Collie and the Infinite Sadness as merely an encore that overstays its welcome. Every bit as grandiloquent and sprawling as its title suggests, Mellon Collie may span 28 fully formed songs, loosely wrapped as a heavy-handed concept album, but there’s not an ounce of fluff here. There’s no knocking Siamese Dream, for sure, but Mellon Collie sees the Pumpkins completely in their own element, unflinching and ambitious. – Dustin Allen

Though Definitely Maybe was great in its own right as a source for the band to show off their swagger and express their rebelliousness, the over-hyping of Oasis as Britain’s next big thing ultimately led the record to fall short of expectations. If Definitely Maybe was Oasis at the cusp of superstardom, Morning Glory was them launching to full-blown superstardom. Singles “Some Might Say” and “Roll with It” were mainstays on the UK singles charts long before the world would be force-fed the band’s megahit “Wonderwall.” While some fans may argue that it isn’t necessarily Oasis’ best song, “Wonderwall” is easily their most recognizable and the one that introduced the world to the brothers Gallagher. – Tyler Weir

Elliott Smith was, strangely enough, Smith’s second album, not the first as to which the self-title might hint. Roman Candle, a collection of mostly unnamed songs, was released first on small Portland label Cavity Search. It was this second self-titled album, thanks in part to Kill Rock Stars, that started to get Smith some notice and acclaim, most notably from Gus Van Sant, whose inclusion of Smith’s spare and ethereal songs in the film Good Will Hunting thrust the musician into the spotlight. Elliott Smith is rife with songs of pain, alienation, self-loathing, drug use and loneliness. In essence, it is somewhat of a diary of Smith’s experiences set to heartrendingly sweet and tender strums of an acoustic guitar. It begins with the searingly truthful and poetic “Needle in the Hay,” a song now famous for its juxtaposition with the suicide scene in the film The Royal Tenenbaums. Throw in the fact that the following hospital escape scene is set to Nick Drake’s “Fly,” and you have a recipe for a weep-fest. – Terrance Terich

One need only glance at the garish cover of Björk’s second album, Post, to fully understand how cartoonish and surreal an album it is. The pinks and oranges, the swirling vortex behind her head—it looks more like a piece of Japanese candy than a pop album, and its surface image is an appropriate introduction to the bizarre world of sound contained within. Produced once again by Nellee Hooper, with the aid of 808 State’s Graham Massey, Howie B and some additional writing by Bristol’s resident trip-hop icon, Tricky, Post is perhaps Björk’s most exaggerated pop record, veering into nearly a dozen different styles and genres at once, sounding at the time like nearly no one else, yet characteristically and undeniably Björk. – Jeff Terich

If 1994’s His `n’ Hers broke Pulp as the next Stone Roses, the following year’s Different Class broke Cocker as the saturnine spokesman of the shiveringly fey. A series of minor-key dancers and glamaged mood pieces didn’t so much extend His `n’ Hers as it did jack the formula into a sort of down-at-heel hysteria. “Raised on a diet of broken biscuits,” Cocker utters in the opener “Mis-shapes“: “oh, we don’t look the same as you.” It starts off disaffected but around the point he yells “we want your homes/ we want your lives/we want the things you won’t allow us,” bestrewn in glitter-guitar histrionics, there’s a serious revenge-of-the-nerds vibe, albeit nerds in crushed-velvet dinner jackets. Later, on the admittedly ‘huh?’-inducing “Sorted For E’s And Wizz” Cocker’s on to “is this the way they made the future feel/ or just 20,000 people standing in a field?” K. If he didn’t make it sound so much like Bonnaroo. – Anthony Strain

In the wake of Pablo Honey and the demon-child hit that was “Creep”, Radiohead were a talented band looking for a rudder. As Jonny Greenwood trundled out his electronics kit and Thom Yorke located further phobic recesses in his brain and voice, they found it. Ultimately the guitars were still big on The Bends—no Radiohead song before or since rocks harder than “Bones”—but there were also flecks of blippery that dramatically prefigured the band’s later machine-fantasia period. Yorke, meanwhile, filled the record with some of his most cutting, beautiful imagery—a million bubbles bursting, a good angel with an Ansaphone, a cracked polystyrene man. Unifying the snarly brood of the “My Iron Lung” sessions with the dreamlike clarity that would drench OK Computer, The Bends didn’t just cycle Radiohead out of the middle, it began their arc to true greatness. – Anthony Strain