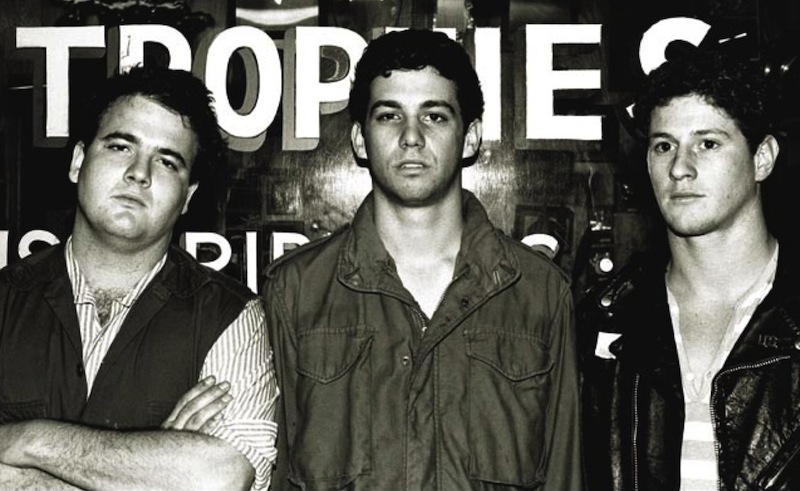 Earlier this year, we presented a list of 10 of our favorite songs longer than 10 minutes. So, now, we’re offering the flipside of that by lining up 10 of our favorite 90 second songs. It’s not easy perfecting a song in 90 seconds, but at least 10 artists have done it (and truth be told, this could have been longer). We jam econo: Here are our favorite short takes, with a 14-minute Spotify playlist to match. Ready, set… go!

In later years, on albums like Tilt and The Drift, Scott Walker began to push his songs into colossally epic dirges, though one of his classics from the ’60s, “30 Century Man” is far more compact. Ironically concerning the ideas of enduring identity and (near) eternal life, the song is a cool, strutting acoustic gem both cryptic and cool. “I’ll save my breath and take it with me/ till 100 years or so,” Walker ruminates, following up his cryogenic plans by saying, “Shame you won’t be there to see me/ shaking hands with Charles de Gaulle.” The significance of each line isn’t altogether clear, but Walker’s baritone makes them sound highly important, whether they are or not. Did I mention how cool this song is?

Leave it to Wire to make a song about girls to sound like a complex logic problem: “Think of a number/ divide it by two/ something is nothing/ nothing is nothing” Wire, more so than most of the first wave of British punk bands, had a way of stopping a track whenever they saw fit, rather than follow the expected structure a pop song typically is expected to. And this is a strong case that sometimes that’s the best way to go. One verse, one chorus, and a groove so good you can’t fault Elastica for lifting it.

It’s a funny, albeit strange fact that, before becoming one of the most intense hardcore punk bands of all time, Bad Brains played jazz fusion. By 1982, however, the closest thing to an odyssey in their repertoire maxed out at three minutes. Keeping it short and powerful, Bad Brains lined their debut with blink-and-you’ll-miss-’em minute-long bursts of rancor, including “Pay to Cum,” a raging standout whose three chord hook can still destroy a brick-and-mortar structure. But in its scant 85 seconds, singer H.R. is given no choice but to spout his lyrics at top speed, just barely keeping up with the anarchy. Sheer energy and force of will keeps it together before it comes to an abrupt stop. It comes and goes quickly, but does a number on the listener in the process.

Discharge – “Hear Nothing See Nothing Say Nothing”

Punk is best served as short and caustic as possible, and UK hardcore pioneers Discharge lived by that credo, serving up fierce political anthems that infused anarchic British punk with the ferocity of heavy metal. The title track to their immortal debut is essentially everything that Discharge does right, distilled into 90 seconds of cynical sneers and distrust of authority. Its anger and frustration is visceral, the band’s d-beat assault infusing each second with requisite fury. It’s gone almost as quickly as it starts, but with a song this inflammatory, there’s no need for dragging it out.

The legend about San Pedro’s funk-punk trio The Minutemen is that they chose the name based on the fact their songs were typically around a minute long. The story about the name is false, but their penchant for brevity (as reflected in their “we jam econo” motto) was very real. Of the 45 songs on their iconic double album Double Nickels on the Dime, those that extend beyond two minutes are the minority. But the band could say a lot in 60 to 120 seconds, as they did on “Viet Nam,” a high energy standout that balances political statements about the Vietnam War with a funky hook that makes protesting more fun than it should be.

The problem with the thousands of Pixies clones that emerged after their breakup is that hardly any bands have been able to capture both the band’s songwriting sensibility as well as their economy. To wit: “Broken Face,” a 90-second smasher that touches upon Black Francis’ favorite topics of incest and interracial sexuality (no Bible references though) contains three verses and a false start, and still rocks so hard it ultimately fractures itself. There are several examples of this kind of brevity in the band’s catalog, but that they were able to do so much in such a brief span is a triumph in itself.

Guided by Voices – “Game of Pricks”

Runners up for Guided by Voices’ best minute-and-a-half monster jam include “Kicker of Elves,” “Gold Star For Robot Boy” and “A Salty Salute.” Yet none of these tracks, although great, boast the anthemic, emotionally charged quality of “Game of Pricks,” easily among the band’s best tracks overall. In a sense, it’s a microcosm of what Guided by Voices stands for on the whole: infectious melodies, hard rocking energy, lo-fi production techniques, and Bob Pollard’s beer-treated voice, which unleashes razor sharp lines like “I never asked for the truth, but you owe that to me.” It sometimes gets hard to keep track of the literally hundreds of songs in GBV’s catalog, but this one deserves to live life on repeat.

Not many bands believe in the idea of “less is more” quite like Spoon. Their three-chord rockers don’t need a whole lot to sound great, and sometimes that goes for length as well. “Car Radio” isn’t alone as far as concise, punk-edged pop tunes on their second album, A Series of Sneaks, which goes a long way toward explaining why they received so many comparisons to the Pixies at the time. And given that it’s also one of their hardest rocking songs, it wouldn’t sound entirely out of place on Surfer Rosa. Spoon does laid back groove better than most, but on a crunchy standout like this, they can set the place ablaze.

MF DOOM’s rapping technique tends toward the stream-of-consciousness, his jams frequently side-stepping choruses or big crowd-hyping hooks. Paired with the jazzy production style of Madlib as Madvillain, DOOM delivered some of his most abstract material, which also turned out to be among his best. As such, all of the abbreviated tracks, chief among them the laid-back marimba funk of “Curls,” run their course without much repetition. “Curls,” part radio drama score and part chill-out groove, finds DOOM and Madlib at their best, the metal-faced emcee tossing out hilarious non-sequiturs like “Five-hundred-something dollars right there in the street/ let’s try and get somethin’ to eat.” Hip-hop as dadaism, or just playfully detached? Let’s say both.

Grindcore, by necessity, doesn’t go long. It shouldn’t. It can’t. A band whose motivation is to play as fast, as abrasive and as heavy as possible is only risking carpal tunnel syndrome and torn rotator cuffs by turning it into a marathon. That said, grindcore definitely has its share of innovators and groundbreaking artists. Pig Destroyer, a band whose career has turned terrifying, gut-wrenching sounds into high art, have consistently been the best songwriters in grind in the past decade (and have a catalog almost exclusively comprising 90 second songs). Their 2004 album Terrifyer standing as one of their strongest, and among the numerous standouts on the album is “Restraining Order Blues,” a hardcore barnstormer that’s just as aggressive as PD has always been, but with a menacing groove that’s downright catchy. Never let anyone tell you that harrowing feats of melodic terror can’t also be fun.