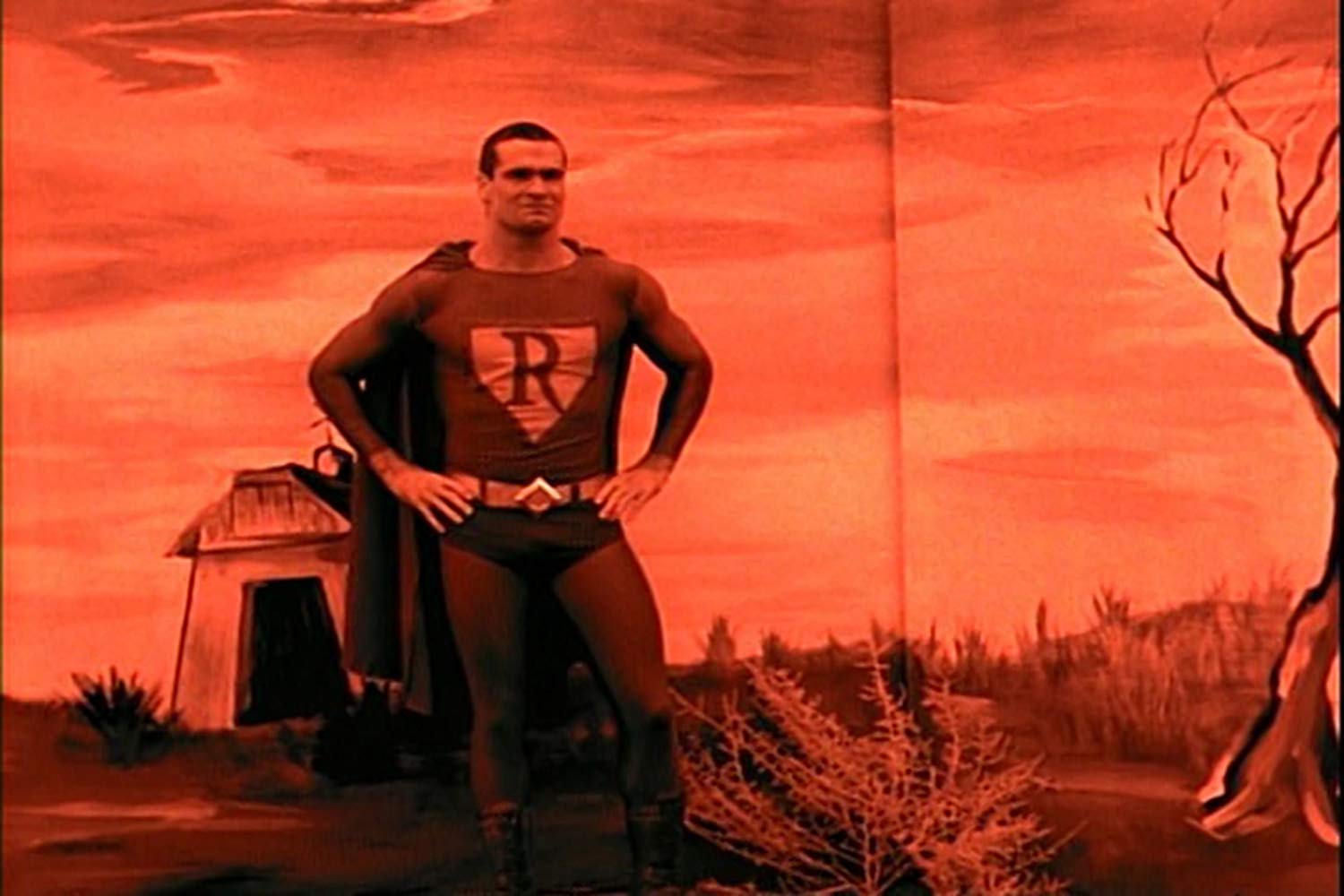 Last week marked 20 years since the release of Alice In Chains’ Dirt, an album that not only brilliantly fused heavy metal with alternative rock (“grunge,” if you prefer), but sold 4 million copies! And later this year, Soundgarden is releasing their first album in 16 years. Jury’s out on how that one will turn out, but at the very least, these two items of note got us thinking about an era when heavy music began to cross over into broader territory, and a band could have a song on both “120 Minutes” and “Headbanger’s Ball.” And that, more or less, was our criteria for listing our 10 favorite alternative metal singles. There are plenty of other artists we missed — Jane’s Addiction, Monster Magnet and Rage Against the Machine to name a few — but we made sure to stop short of nu-metal, save, arguably, for one band. Crank it up and break some rusty cages.

Sociologist Max Weber helped codify the phenomenon of the cult of personality, where someone uses any media means necessary to elevate their status to that of hero, ubermensch, or more. Living Colour didn’t just use the concept in order to tear it down (pleas from Kennedy and Malcolm X bouncing off pronouncements like “You gave me power in your god’s name/ I’m every person you need to be“), they eventually became it. The band originated from guitarist Vernon Reid’s efforts with New York’s Black Rock Coalition to relight the torch once carried by Jimi Hendrix and Thin Lizzy. They and their first single from debut album Vivid soon spread like a virus—CBGB’s to MTV to Rolling Stones world tours—and with good reason. Over-the-top yet poignant and pointed, “Cult” is anchored by Corey Glover’s passionate tenor melody, Will Calhoun’s crashing drums, and Reid playing guitar parts as memorable as Zeppelin: the growling main riff, the free jazz/fusion solos that boil and scream. How much staying power does this have? A 34-year-old pro wrestler just made the 24-year-old song into the best entrance music ever. – AB

Ministry made a pretty huge transformation in the course of half a decade. Starting out as new wave synth-pop before going a little more goth, and eventually embracing the misanthropic sounds of industrial, their sound at the end of the ’80s scarcely resembled that of their beginnings. And in 1989, with The Mind Is a Terrible Thing To Taste, Ministry took that one step further by incorporating elements of thrash metal into their vicious machine grind. “Burning Inside” is the formula perfected—gothic dance pulses torn to shreds by unforgiving power chords and Al Jourgensen’s seething vocals. And you can dance to it! – JT

from The Reality of My Surroundings (1991; Columbia)

How fitting is it that two of alternative metal’s biggest and earliest successes come from Black musicians? Being the Other in a crowd of otherwise white professionals is pretty tough, but when that profession already means being on the fringe of the fringe, it’s poetic justice that Living Colour and their West Coast contemporaries in Fishbone made the collective splash they did when they did. “Sunless Saturday” found the ensemble flexing social justice muscles in their lyrics and using funk to punch up an already sweeping arrangement. You hear The Roots in there, you hear Foo Fighters in there too. The song was a microcosm of The Reality of My Surroundings, an album expanding the reputation they built cold rocking parties on releases like Truth & Soul. Fishbone may forever be haunted by the long shadow Living Colour cast—they dawdled getting in the spotlight and stayed there a much shorter time— but that doesn’t mean they couldn’t hit as hard. – AB

Soundgarden’s last two pre-reunion albums, 1994’s Superunknown and 1996’s Down on the Upside, didn’t feature heavy metal elements as prominently as their previous few. But when their style of metallic, riff-heavy grunge sounds as kickass as it did on 1991’s Badmotorfinger, there’s not really any point in trying to outdo it. And it just so happens that the band perfected this hook-laden metal sound within the first track, “Rusty Cage.” Like any great metal track, it has riffs to spare, climbing and chugging and twirling over pounding rhythms. Chris Cornell wails about completely indecipherable shit, as usual: “You wired me awake and hit me with a hand of broken nails” – huh? Making sense was never the point with Soundgarden, though; the point was to rock the fuck out, and on that front: mission accomplished. – JT

Alice in Chains – “Them Bones”

Alice In Chains started life a little closer to the Sunset Strip spandex metal scene than they did to grunge, so it’s a good thing they discovered some gnarlier, uglier sounds, which achieved perfection on 1992’s Dirt. A bleak album that largely concerns heroin addiction, Dirt is nonetheless stacked with massive singles, from grunge standard “Would?” to lighter-lifting power ballad “Down In a Hole.” Their greatest fusion of metal and an alternative aesthetic comes right within its first track, “Them Bones.” Just shy of two and a half minutes, it comes and goes in a hurry, but not without lots of chugging guitars, a fiery solo and one of the most unforgettable choruses to land on “Headbanger’s Ball.” Some might argue this spot belongs to “Man In the Box,” but what “Them Bones” might have slightly lacked in ubiquity, comparatively speaking, it makes up for in being an immortal fusion of heaviness and hooks. – JT

Funk metal is sort of a ridiculous concept when you really think about it. So it’s even more ridiculous to think that Faith No More actually made a fusion of metal and funk into operatic high art. Sure, we all saw the fish flopping around in the dramatic video for 1991’s “Epic,” but the following year, the band upped the drama even more on the weird and dark Angel Dust, which contains their greatest single (sorry, “Epic”), “Midlife Crisis.” In this track, however, the band doesn’t so much play up the funk aspect as they do the ethereal gothic elements that loomed large in their music, primarily thanks to keyboardist Roddy Bottum. Add on layers upon layers of harmonized Mike Pattons, and a hostile vocal that may or may not be about Madonna, so Patton has said, and you’ve got a driving track that put the art in alt-metal. – JT

For more than a few metal bands, the name of the game is maximalism, but Helmet’s Page Hamilton couldn’t care less. He favors an agenda of simple, clean, drop-D power chord crunch. It’s straightforward. It’s elegant. It gets the job done. Lest anyone find the thought pedestrian, however, “Unsung” should cure anyone of such misjudgment. The song’s taut mechanisms groove like well-oiled clockwork, syncopated and swaying, but held together with the one-two whack of John Stanier’s piccolo snare. It’s a beast of a song – this is not in debate – it just comes together so elegantly, its heaviness is almost subliminal. – JT

Generally speaking, Nine Inch Nails were never really much of a metal band. From their debut album Pretty Hate Machine, Trent Reznor’s industrial rock vehicle has been primarily built around synths, though piercing, distorted guitars definitely played a part of that. However, 1992’s Broken EP is the sort-of exception where guitars rule above all. And lead single “Wish” is basically what happens when a hyper-aggressive industrial band create their own equivalent to Sweet’s “Ballroom Blitz.” It’s an odd mix of catchy chants, shuffling drums, and lots and lots of guitar. And no matter how angry it gets, there’s no getting around how fun it is. – JT

Let’s face it: In spite of Henry Rollins’ Black Flag pedigree, this song—quite frankly, the whole of Rollins Band’s reputation—is pretty much nothing without that video. But boy, does it ever become something. It raises up Hank’s schizophrenic cool/unhinged delivery from merely unnerving monologue to fantastical parable. Keep an untrusting, nihilistic eye on society: ask if your religious leaders are chaste, your cops clean, your superheroes really superhuman, lest you be convinced lying is the way to live your own life as well. And even in the heyday of grunge’s quiet-loud dynamic Rollins Band went to the extreme, with moments of folksy strumming as well as matching doom for sludgy doom (especially in the choruses). When Rollins half-sings “I will never tell a lie, no, no” coming out of the bridge, only to laugh forcefully in your face, you’re really hearing the sound of switches flipping in a million suckers’ brains. – AB

Deftones – “My Own Summer (Shove It)”

Our intention with this list was to keep it free from nu-metal, mostly because it hasn’t aged all that well. There are certainly some notable exceptions, the absolute best being Sacramento’s Deftones, who arrived just as grunge had waned and presented a unique blend of melodic haze and crushing heaviness. And while they’ve released a handful of stellar singles over the years, their breakout hit “My Own Summer” stands as their strongest. Its impeccable combination of eerie grooves, thunderous low end and whisper-scream dynamics make it a kind of signature track for the band. They grew even more invested in atmosphere and texture over the years, which marks a pretty big departure from the overall genre trend of generally being obnoxious, but there’s nothing quite like this song’s explosion to release a few endorphins. – JT