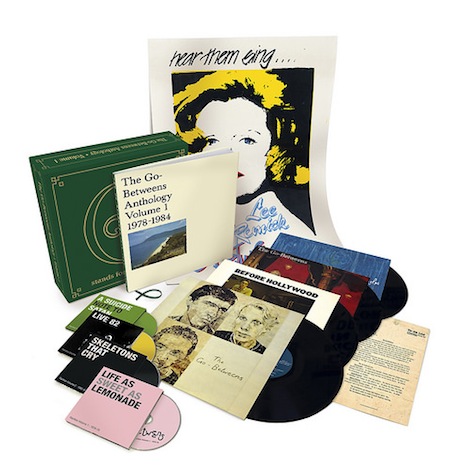 Australia’s The Go-Betweens are one of the most highly acclaimed, and yet also underrated bands of all time. Active during the post-punk era of the 1980s — and later regrouping in 2000 on The Friends of Rachel Worth, backed by Sleater-Kinney — The Go-Betweens balanced an arty edge with a melodic sophistication that made them one of the most consistently great acts of the decade. And if you happened to miss out on any of that, Domino Records has your back.

On Jan. 20, Domino will release a new Go-Betweens box set titled G Stands For Go-Betweens: Volume 1, 1978-1984. The box set covers the first half of the band’s career (Mk. 1) which begins with debut album Send Me A Lullaby and ends with 1984’s Spring Hill Fair. In addition to the first three LPs, the box also contains a fourth compilation titled The First Five Singles, which contains early singles and b-sides. And there’s more where that came from; on top of the four vinyl LPs in the box, there will also be four additional CDs featuring rare recordings, demos, radio sessions and a complete live show from 1982. Toss in a 112-page book featuring liner notes and photos, and you’ve got yourself a pretty impressive package.

And yet, it gets even better than that. The first 600 people to order the box will receive a randomly selected book from the literary collection of the band’s singer and songwriter Robert Forster — many of which were signed and dated at the time of purchase. Now that’s interesting!

There’s no information about a possible follow-up box set featuring the albums Liberty Belle and the Black Diamond Express, Tallulah or 16 Lovers Lane, but we can presume that if this one is successful, that’s likely to follow.

The National announces A Lot of Sorrow box set