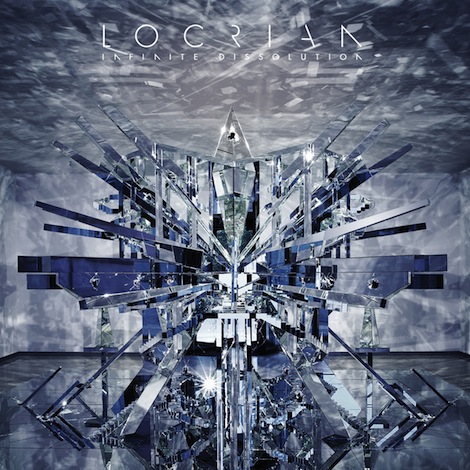 Few bands have devoted as much time to musically documenting ideas of decay and rot as Chicago trio Locrian has. Each of their recordings, from their earliest days as industrial drone-mongers to their more eclectic constructions of the past five years, is conceptually bound in some way or another to finality, or the inevitability of death. It’s the very core of their artistic being, and its presence is palpable simply in the titles of their work, such as 2010’s Falling Towers and Dissolvers, or 2013’s Return to Annihilation. And so it is with their latest release, Infinite Dissolution, wherein vocalist Terrence Hannum’s final lyrics are “Cease to grow/Start to dissolve.”

For as much effort that Locrian has poured into this career-long observation of erosion and endings, it’s a curious irony that their music has been on a continuous path of growth and expansion for the past decade. The slow, ambient drone of early recordings like Drenched Lands no longer entirely defines their sonic approach, which now reaches its shadowy tentacles into the adjacent realms of black metal, post-rock, noise, and even in some curious moments, synth-pop. Yet that ominous, withering darkness remains at their core, a sinister reminder of the bleak and unsettling band they’ve always been, but don’t always present in such strict, rigid terms. You can hear that eerie ghost lurking in the negative space of Infinite Dissolution, the band’s best album to date. But it’s the vibrant and intense structure of terror and beauty that Locrian builds on top of that foundation that accounts for its triumph.

The balance that Locrian strike on Infinite Dissolution tip-toes between noxious, claustrophobic atmosphere and towering, majestic anthems. And this often happens in the course of a single track, such as opener “Arc of Extinction,” where the oozing static of electronic noise becomes a fog for a soaring black metal song to break through. It grows from a menacing nothingness into a fully formed whole, every bit as dark and uncompromising, but with the gift of melody to give it legs and momentum. There’s a similar progression to “Dark Shales,” but it’s less drastic a transition, the alien mists of funereal synthesizer that open the song transforming into a driving post-rock march, and one that would maintain that ethereality were it not for Steven Hess’ intense snare-drum crack, the likes of which bear the trademark sound of Electrical Audio studios (though not Steve Albini, specifically).

This concentrated drive toward more melodic, climactic material ultimately renders Infinite Dissolution Locrian’s most accessible album, though it’s a relative distinction. Accessibility by Locrian’s standards is an odd measure, considering most of their songs stray pretty far from traditional verse-chorus-verse structures, and some take three to four minutes before their feet hit the ground. But they make interesting detours here, launching headfirst into a roaring, four-chord metal track on the brief and badass “The Future of Death.” But a few thrilling surprises aside, Locrian’s wheelhouse is ultimately in that which slowly unfolds and reveals itself with patience and careful pacing. “An Index of Air” is the best such track, split into three parts that juxtapose a moody drone with a black metal midsection and a post-hardcore coda. Hannum’s vocals are prominent in darkly poetic lines like “The azure vault of heaven/ Disappears in elevations,” but it’s the gorgeously executed arrangements that provide the real show.

Death and decay still hang heavy in the chilling compositions of Infinite Dissolution, as would be expected from an album whose title projects a pretty harrowing vision of its own. In a way, it’s almost comforting to know that the band hasn’t abandoned the themes of their past works, even if the sound has grown into something entirely different. Locrian are creating a soundtrack to a crumbling existence, but its possibilities seem endlessly fertile.