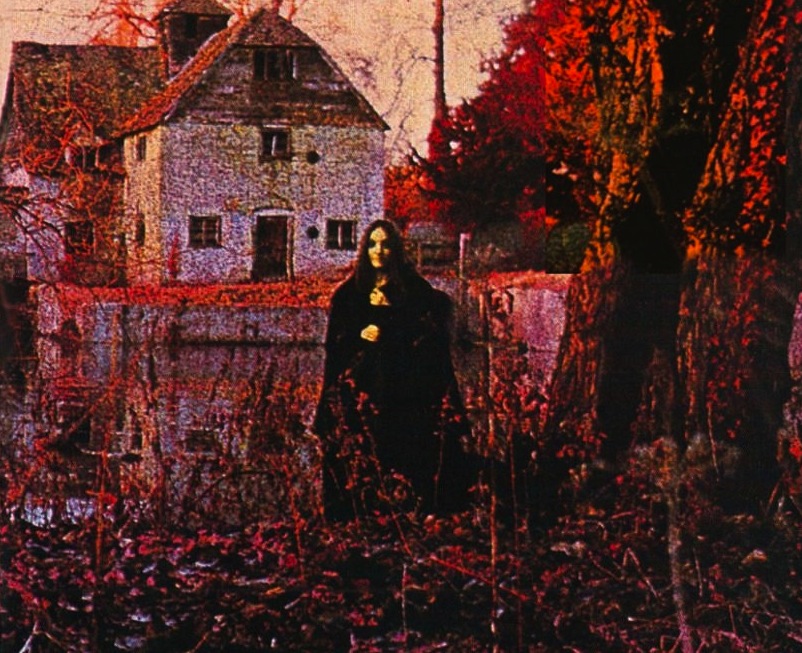 There are a lot of reasons to welcome the autumn season with open arms. For one, we can all be thankful that soon enough we’ll be sweating a lot less (and by extension complaining a lot less about how much we’re sweating—it’s a vicious cycle). For another, there’s Halloween, a holiday that some metalheads liken to the vampires’ night off in Buffy the Vampire Slayer, but I personally have grown to celebrate with greater enthusiasm than most others (sure beats Columbus Day!). But there’s another important, crucial reason to be excited about fall: Doom metal.

Let me be clear. You can listen to doom metal year-round. You should listen to doom metal year-round. In fact, my summer of 2014 was more or less consumed by Pallbearer’s Foundations of Burden. With few air conditioning options at my disposal, I spent several afternoons working in a nearby beer bar to stay frosty, and keep that album on repeat while I did so. I’ll admit that’s a bit of an outlier. Because if there’s a season that was made for doom metal, it’s fall.

It all, essentially, goes back to Black Sabbath’s debut album. With a creepy looking witch on the cover and an opening title track that sounded essentially like a horror film with bigger guitars, Black Sabbath created a mood on their first album that countless bands have been trying to recapture for 45 years. And some of them have done a bang-up job, if you ask me. In the past 20 years or so, few doom records have made an old sound seem as fresh as Electric Wizard’s Dopethrone has. And yet, particularly as we approach the mischief and spookiness of All Hallow’s Eve, I’m drawn to vintage doom: The occult ceremonies of Pagan Altar, the raw slow-mo churn of Saint Vitus’ first album and, yes, more Sabbath. And it’s not so much that they’re scary—they’re not. I’ve never found metal to be particularly nightmarish, save for the rare masked-and-dissonant weirdos such as Portal or Aevangelist (yeah, that stuff’s kinda scary late at night in the wrong corner of the woods). It’s more of a feeling, like midnight movies on VHS with a comforting amount of static, wow and flutter.

Which is to say nothing of the recent batch of great doom metal albums released this year, including SubRosa’s For This We Fought the Battle of Ages, Lycus’ Chasms, Spirit Adrift’s Chained to Oblivion, and coming in just a couple weeks, Khemmis’ Hunted. Treble’s pop and hip-hop columnists had plenty of material to address during the summer as far as seasonally appropriate music goes, but now it’s time for something darker and heavier. I don’t know about you, but for me the season of doom couldn’t have come a moment sooner.

The best metal tracks of October 2016

Longevity is something that metal bands do surprisingly well. There aren’t many catalogs that are absolutely perfect by any means, and few bands survived the late ’90s without some embarrassing photos or forays into nü-metal cringe, but given how strong the recent batch of material from legends has been lately, it’s hard to come away with any other conclusion than that metal bands age pretty well. Take Dutch death metal outfit Asphyx, who are coming up on 30 years as a band next year. Before they get there, however, they’ve offered up the just-released Incoming Death, featuring a face-ripping two-minute title track that’s as direct and unbelievably ass-kicking as any death metal track you’ll hear this year. It moves quickly, it gallops at a breakneck pace and it gets the fuck out before it wears out its welcome. Might as well spin it another half dozen times—blink, and you just might miss the carnage.

I already said it’s doom metal month, right? Good! Let’s stay here for a moment and talk about the best new doom metal album you’re going to hear this month, Khemmis’ Hunted. It’s been just a little over a year since the Denver-based band released their last album, Absolution, and they’ve already made some great strides toward heroism. I would love more than anything to dedicate this space to Hunted‘s title track, but it’s not streaming anywhere just yet (just you wait, though). “Candlelight,” however, is pretty stellar, though. Khemmis’ brand of doom is a fun cross section of traditional doom a la Candlemass or Cirith Ungol, with a touch of slo-mo New Orleans sludge in the vein of Crowbar, all of which come together elegantly and powerfully here. In fact, the name of the track does lead one to think of Candlemass, perhaps intentionally, though vocalist Phil Pendergast is more stoic than operatic. Nonetheless, it’s hard to find more satisfying slice of doom metal hitting shelves this month. And believe me, this is just the tip of their occult iceberg.

It wasn’t necessarily my intention to do more than one track pick from an album that was already released, but you’d be surprised how much happens in a month. So forgive me for playing a round of catch-up here. Oathbreaker, a kind of genre-shattering band from Belgium, elegantly weave their way between shoegaze, dense and spacious alt-rock a la Failure and Deafheaven-style black metal. As such they’re probably a nightmare for those among us who’ll be kvlt till death, but for those who like a challenge and for their metal to have varying subtler shades among its riffs, Oathbreaker are quite stunning. “Immortals” is a highlight among many strong tracks on new album Rheia, never letting up in its heaviness yet maintaining a standard of beauty and elegance throughout. There’s a lot to soak in here, with an awe-inspiring dynamic range and versatility that puts Oathbreaker in a class all their own. But no matter how many listens it takes to fully appreciate its majesty, it’s worth taking the time to get there.

[from Rheia, out now; Deathwish Inc.]

So, this was just released. It’s not as if I was scraping the bottom of the barrel or anything, either, but whatever was my fifth choice for track picks in the ol’ monthly unranked metal countdown was knocked down a peg. Because that’s what happens when there’s a new Ash Borer track to contend with. Now, I’m not totally convinced that “Irrepassable” is a word, but that’s all part of the black metal pageantry, of which Ash Borer takes little part in—I’ve never even seen their faces, though in some respects, not showing your face is part of a certain kind of black metal pageantry. Anyhow, the California black metal outfit’s strength is not so much marketing but crafting epic, eerie and devastating black metal tracks that take the listener on a dark, psychedelic journey. And so it goes with “The Irrepassable Gate,” a soaring balance of lightning speed devastation and slow moving, ominous intrigue. What’s most remarkable, however, is that it sounds very much like the highest fidelity Ash Borer recording to date, so whether or not they’re ready to reveal themselves to the world or undergo a world tour, they’re headed somewhere interesting. This is a hell of a first step.

[from The Irrepassable Gate, out December 2; Profound Lore]

So, I’ll go ahead and just say right here that Whales and Leeches, Red Fang’s last album, didn’t have a whole lot of replay value for me, even if at the time it sounded pretty fun. Still, I feel pretty good about their latest, Only Ghosts, if only because it plays up their melodic sensibility a lot more. They’ve always been in a class of metal that fell somewhere between The Sword and Torche, being that they were essentially a heavy rock ‘n’ roll band. And that hasn’t changed in the slightest with “Not For You,” which could very well pass for a grunge song—something we’ve spent a lot of time thinking about lately. And that’s not such a bad thing at all; Melvins and Soundgarden each arguably released essential grunge/metal crossover records at their peak that stand up to the best in either realm, and Red Fang is carrying the torch in a more stoner-rock-style vehicle. “Not For You” is loaded with hooks and simple, yet effective riffs. This is the Red Fang I love hearing, and I’m stoked to hear them pulling more ideas from their bag of tricks.

[from Only Ghosts, out October 21; Relapse]

The best metal albums of the month:

Crowhurst‘s II: A band that grew out of a one-man Los Angeles electronic noise project, Crowhurst has evolved admirably into an abrasive hybrid of black metal and noise rock. A good chunk of the album could pass for vintage Amphetamine Reptile brutality a la Unsane or Touch and Go a la Shellac, which makes for a fun juxtaposition with the more explicitly metal moments. Also, those last 13 minutes offer some truly epic terror. (Broken Limbs)

Helms Alee’s Stilllicide: Helms Alee’s heaviness is rarely an end in itself. The Seattle trio is notable, first and foremost, for writing really strong melodies that just happen to be part of a larger and heavier creation. So as a result, their take on metal, however loosely defined, is one that leans more toward Unwound-style post-hardcore, which is basically a siren song for those like myself. This album has some of their strongest songwriting to date, including immediate standout “Tit to Toe,” so I highly recommend metal fans with an ear for arty punk seek this out. (Sargent House)

Neurosis‘ Fires Within Fires: Neurosis has a pretty incredible catalog. Sure, their first couple of records were only mere suggestions of what they’d become, but for 25 years they’ve been more or less unstoppable. No need to stop now! And with Fires Within Fires, their shortest album in nearly three decades, they scale back without making their songs feel any less colossal. They keep the focus on making the five tracks here as intense and intriguing as possible. Achievement unlocked. (Neurot)

Trap Them‘s Crown Feral: Trap Them generally don’t stray too far from the crusty hardcore sound they’ve been grinding out for five albums now, but they manage to find more darkness to explore, stretching their songs away from one-minute powerviolence pummel-fests and toward some titanic mosh pit anthems. It’s a development that I’m quite enjoying. (Prosthetic)

True Widow‘s Avvolgere: Admittedly, True Widow doesn’t play music that’s easily classifiable as metal. But they tour with metal bands, play metal festivals, release records on a (mostly) metal label and carry an ominous darkness that, while not utterly crushing, could be in some way construed as metal. But even if this is just moody rock music, it’s quite excellent. Heavy without being totally devastating. (Relapse)

It’s the 30th anniversary of Slayer’s Reign in Blood today. Play it to death.

Helms Alee – Keep This Be the Way

Helms Alee announce new album, Keep This Be the Way