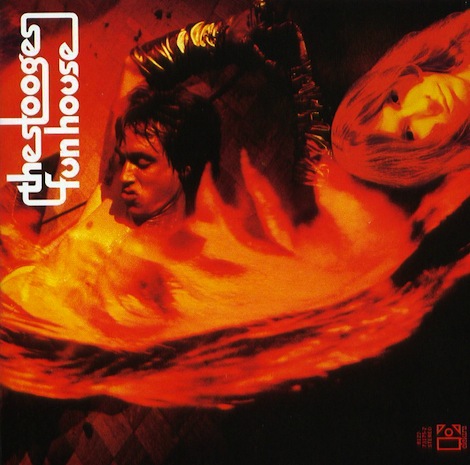 If “Louie, Louie” was the epitome of rock ‘n’ roll, then having The Kingsmen’s keyboard player produce your album is just about the most rock ‘n’ roll thing you could possibly do. That’s most likely what The Stooges had in mind when it came time to record their second album, Fun House. While former Velvet Underground member John Cale gave their first, self-titled album a kind of eerie, yet decidedly more professional sheen, Don Gallucci removed the façade, revealing The Stooges for the raw, unfiltered animals they truly were. And despite what Ted Nugent may claim, Iggy Pop was the original Motor City Madman.

Fun House both contradicts and follows in line with its namesake. Like a fucked-up house of mirrors and sideshow freaks, the album is a veritable carnival of sounds. Yet, it’s anything but a wholesome good time. It’s a menacing descent into the underworld, as the cover image of Iggy melting into flames would suggest. Fun House is a dirty, hellacious rock ‘n’ roll record that made rock `n’ roll even more dangerous than it was. And let’s be honest, it had long since lost its innocence in 1970.

The Detroit band’s second album shot like a bottle rocket straight from the point where their self-titled debut left off. The result is a trail of flames and ash, scorching everything in its path. The songs are less bound by structure and more groove-based. The seven-minute title-track is a funk-inspired, saxophone squealing jam session from the underworld. “No Fun” rides the dirtiest groove in rock history. And “Down on the Street” is filled with howls and grunts, showing off Iggy Pop’s unchained beast within.

The three-chord straight-ahead romp of “Loose” almost recalls “Louie, Louie” in its simple, yet chaotic mess of pure energy. Dave Alexander’s guitar solo on this song reveals the show-off inside, adding more improvisation to a band that was quickly on its way to throwing convention to the wind (though that wasn’t necessarily the case on Raw Power). And “TV Eye” is sweaty, raw-assed sexual drive, straight down to the lyrics “See that cat/down on her back/she got a TV eye on me.”

The album’s high point is undoubtedly “1970,” a sort of sequel to their previous album’s “1969.” While both feature a similarly tribal rhythm, “1970” is far more dangerous. Delving into an improvisational, almost free-jazz freakout after Pop’s vocal, it’s the more wildly experimental of the two, and one of Fun House‘s best tracks. It is not, however, as fucked up and incomprehensible as “LA Blues,” a song that is anything but what its title suggests.

Then there’s “Dirt,” a slower, bluesier version of the murky groove in “No Fun.” It’s almost a dirge, almost what one would call a “slow” song, but certainly not the kind that anyone would make out with their steady to. How this album was ever released, I’ll never know. I would like to have witnessed the meeting where the suits listened to the album for the first time. What an afternoon that must have been. Regardless, by some odd chance that there really were people deranged enough to enjoy it (Guilty!), it lives on today, being reissued by Rhino with extra tracks no less. If this album could have made it in 1970, then, by golly, anything is truly possible.