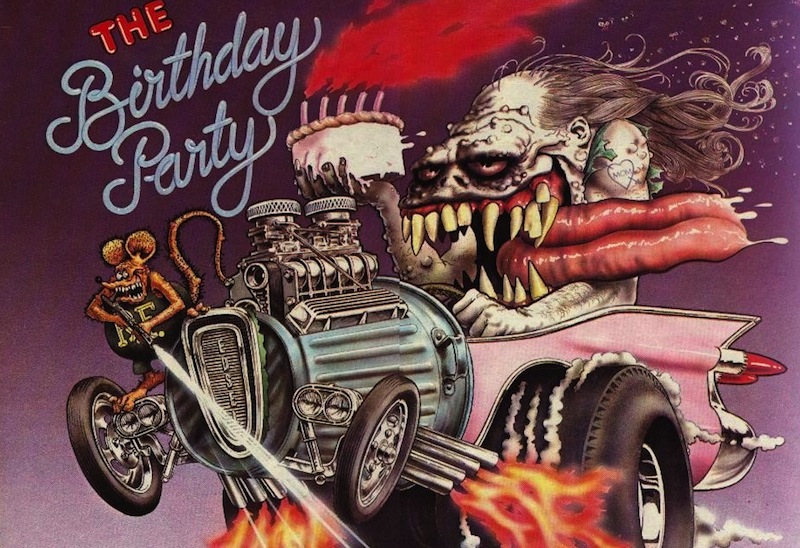 It’s never seemed quite right to call The Birthday Party post-punk. To be “post” anything would imply that their music was something refined and filtered and bred to be a kind of stylistic ideal—the end result of a filtration process that weeded out a genre’s least desirable traits and purified it. The Birthday Party eschewed purity and aesthetics. Theirs was a primal form of expression, a scream bellowed from deep within the soul, a manic form of noise and terror given the gift of melody and rhythm. There is, of course, a perfectly antiquated term for such an ungodly screech: Rock ‘n’ roll.

Maybe, more accurately, The Birthday Party were post-America. Originally formed in 1977 as The Boys Next Door in Melbourne, Australia, the band occupied a strange and essentially peerless place in the post-punk landscape. In the early ’80s, the band—singer Nick Cave, guitarist Rowland Howard, drummer Phil Calvert, multi-instrumentalist Mick Harvey and bassist Tracy Pew—relocated to London, where they recorded the feral yawps of their noise-ridden debut album Prayers on Fire. Soon after relocating to London they became disillusioned and disappointed by what they saw as a scene that mostly cast aside the manic intensity of the few groups they did take to, like The Pop Group. So for their second album, Junkyard, they mined the depths of twisted Americana, once listing off a series of cultural endorsements in NME that included Morticia Addams, Night of the Hunter, Johnny Cash and Flannery O’Connor. Even the cover art features a hot-rod racing ghoul painted by lowbrow icon Ed “Big Daddy” Roth. This arsenal of uniquely American pop culture, fed through their already tempestuous sonic filter, resulted in the most potent American gothic album ever made by an Australian band.

Released 35 years ago via 4AD Records—whose Vaughn Oliver and Duane Michals artwork and stylish darkwave sounds made The Birthday Party stand out like a festering sore—Junkyard became the defining document of The Birthday Party. The sound of Junkyard was, as Simon Reynolds described in his epic history of post-punk Rip It Up and Start Again, “a soundscape teeming with gargoyles and bubbling with putrescence.” It’s positively beastly, the heaviest album of the post-punk era by a good margin, far more confrontational and belligerent than the ubiquitous new wave sounds that the UK was exporting at the time. It also pulsed with the sounds of blues, R&B and rockabilly—as much as they can actually be recognized as such. The bassline and percussive swing of “Several Sins” is like a mangled photo-negative of a ’50s-era rock ‘n’ roll hit; that it slightly resembles Peggy Lee’s “Fever” probably isn’t coincidental. On a custard-pie lobbing tour with Bauhaus, the two groups performed that torch-song standard together as an encore.

Well before Nick Cave was invoking the Good Book in “The Mercy Seat” or rewriting the story of Lazarus, he reimagined Jesus in the form of both rock star and corporate icon in the twisted “Big-Jesus-Trash-Can.” But here Jesus is also a stand in for another King: Elvis Presley. “Wears a suit of gold (Got greasy hair),” bellows Cave. “But God gave me sex appeal.” Just three years later he’d revisit the Presley myth on “Tupelo,” a fairly terrifying account of Elvis’ birth and that of his stillborn twin Jesse, but here the grotesqueries are multi-sensory, Rowland S. Howard’s guitar riffs and Mick Harvey’s skronky saxophone approximating “Jailhouse Rock” broadcast through Hell’s jukebox. Another iconic Nick Cave trope shows up in “6-Inch Gold Blade”: The murder ballad. It’s a song I remember feeling uncomfortable about the first time I heard it; more accurately I felt uncomfortable about how much I loved the song, in spite of how violent and gruesome it was. Against bluesy gothic burlesque rhythms, Cave juxtaposes confessions of sticking a “six-inch gold blade in the head of a girl” with possessed screeches of “Shaaaake!” Just 14 years later he’d record a beautiful ballad with pop icon Kylie Minogue that featured a similarly horrific end.

Cave also took inspiration from the classics—and caked them in blood and filth. “Hamlet (Pow, Pow, Pow)” imagines Shakespeare’s title character as a gun-toting, crucifix-wearing figure of terror with a rapidly deteriorating mental state. It’s one of the most climactic and furious tracks on the entire album, which says a lot. Howard’s fiery riffs during the chorus punctuate Cave’s bellows with a rapid series of exclamation points, though Cave no doubt holds his own. At The Birthday Party’s 1983 live performance in Los Angeles, which Black Flag frontman and longtime friend Henry Rollins described as “thoroughly godhead,” Cave gave what’s become through that L.A. punk’s storytelling over the years something of a legendary performance. “When you saw him onstage with The Birthday Party, you would never think he could be a father,” he said in The Independent. “The father of the Antichrist maybe.”

In the studio, getting that kind of performance out of Cave came from Howard and Harvey’s persistent, almost cruel insistence that he record his most draining parts over and over again. “Poor Nick was completely out of breath and almost collapsing, giving it his all,” said producer Nick Launay in an interview with The Quietus. “Meanwhile Rowland and Mick were pissing themselves laughing, they said ‘get him to do it again, get him to do it again!'” The band hit another snag when bassist Pew was arrested on drunk driving charges and sentenced to two months in prison. Magazine bassist Barry Adamson ended up filling in on punk bruiser “Kiss Me Black,” and subsequently joined The Bad Seeds after The Birthday Party’s breakup a little under two years later.

Junkyard‘s tracklist has been adjusted with subsequent reissues to include “Blast Off” and “Release the Bats,” an important two-sided pairing that not only offered a peer into the twisted punk-blues that the band would embrace on the album, but also presented two of the band’s best songs to date. The former was later slotted into the opening track on a ’90s-era CD reissue, and understandably so: When you really want to get a record started with energy and antagonism, you do it with a song called “Blast Off,” a no-wave rockabilly rumbler that honks with squalling saxophone and Rowland Howard’s piercing guitar riffs. Leaving an even greater impression, if such a thing could even be possible, is “Release the Bats,” the closest thing to a goth-rock hit in the group’s repertoire, all rock ‘n’ roll tom-tom thumps and manic yelps on the part of Cave: “She says damn that horror bat, sex! Vampire! Cool machine…” It’s the kind of dangerous, oversexed soul possession that parents once worried would corrupt their children. To hear Cave this unhinged and this fucking cool simultaneously, they’d be well within their rights to do so.

The Birthday Party started to fall apart during their efforts to record a follow-up to Junkyard. Cave and Howard had dramatically different visions for the band, and rampant drug use and drinking led to an expected sense of chaos, one that proved unproductive for the band no matter what their fearsome presence would lead one to believe. The resulting EPs from their final sessions, Mutiny and The Bad Seed, weren’t particularly well liked by anyone in the band. Harvey remembers in The Quietus that Cave said he couldn’t relate to The Birthday Party’s music by 1983, “so you’ve got a nail in the coffin right there.” By 1984 Cave had started his own band, The Bad Seeds, releasing the avant garde punk-blues debut From Her to Eternity, which opened with a cover of Leonard Cohen’s “Avalanche”—a sign that things had certainly changed, even if the dark heart that kept his old band’s blood pumping was, in fact, still beating.

However fraught the relationships in the band, and however quickly things crumbled, Junkyard captured The Birthday Party at the peak of their manic, violent brilliance. Many of the themes and musical directions that Nick Cave would take throughout his 30-plus-year career with The Bad Seeds had their genesis here, even more so than on its predecessor, Prayers on Fire. Junkyard is a statement of turbulent, seething perfection, a snarling beast of a record. The Birthday Party disrupted and damaged and vandalized popular music with a sonic arsenal of their own making, storming New Romantic’s enclave and releasing a colony of black-winged bloodsuckers.