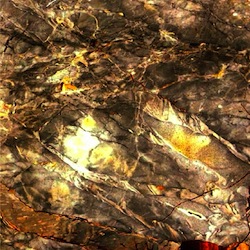 “Cloud rap,” as ephemeral a genre as it is, wouldn’t exist without Clams Casino. Technically, Lil B coined the term, once vocalizing his own aim to make music that sounded like a castle floating in the clouds. But it took the ethereal, ganja-smoke-laced beats of Clams Casino to get him there. Clams, aka New Jersey-based beatmaker Mike Volpe, has the kind of aesthetic that can take years to cultivate. It’s slow and dreamlike, thick and syrupy, and more than a little disorienting. And though hip-hop certainly hasn’t ever shied away from psychedelia, Clams is known for a signature kind of sonic trip — one that can feel like it moves at the pace of molasses, yet knocks all the same.

In 2011 and 2012, respectively, Volpe compiled a series of instrumental beat tracks into a pair of instrumental mixtapes, highlights of which showed up on albums and mixtapes by A$AP Rocky, Main Attrakionz, Lil B and numerous others. For as in-demand as Clams Casino has been as a hip-hop beatmaker, though, the music works equally well, if not better, divorced from a lyrical context. The man’s all about atmosphere — intoxicated, disorienting atmosphere — and this third Clams Casino Instrumental Mixtape 3 is just as blissfully woozy as its predecessors.

On a certain level, Instrumental Mixtape 3 is everything you’d expect from Clams Casino: 40 minutes of dense, glitch beats that are high on melody and marijuana, and plenty intoxicating even without the aid of illegal (outside of Colorado) substances. The material is culled from tracks that Clams crafted for A$AP Rocky, DOOM, Mac Miller and Mikky Ekko, though, unsurprisingly, very little of it requires the aid of an emcee to sound its strongest. Leadoff track “Crystals,” featured on Grand Theft Auto V, is an immediate standout, with layers of synthetic drum sounds and static-ridden synths adding up to a sound that witch house should have been. And while we’re on the subject, the previously unreleased “Haunt” has a melodic, ghostly charm to it, one that’s not so much eerie as awesomely otherworldly.

Though Instrumental Mixtapes 3’s more minimal moments, like the 86-second “Melthru,” are perfectly enjoyable, it’s when Volpe opts for a more complex, layered sound that he transcends the cloud, reaching even higher toward the hip-hop throne he’s so nearly earned. “Cry For Me” is one such standout, a swirling mélange of buzzing bass, vocal chops, and children’s laughs and screams. It’s a thing of dizzying beauty. Ditto “Lvl,” which appeared on A$AP Rocky’s LongLiveA$AP, sans Pretty Motherfucker. It’s classic Clams — a hypnotic, atmospheric beat that goes nowhere with any particular hurry, but sounds great even when inert. He could honestly make another three mixes of this sort of track and it would be perfectly enjoyable; he’s already shown his hand with tracks like “Cry For Me,” however, which suggest that Clams Casino may yet be stepping off of the cloud, and onto a whole new platform.