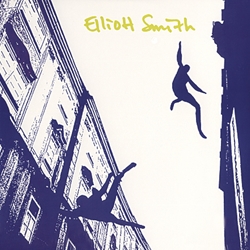 It’s been one year since Elliott Smith’s death shook me to the core of my being. I look back on the day that I heard the awful news and recall how I went from person to person, seeking someone out with whom I could relate. While those who had not been exposed to Elliott Smith’s music must have thought I was intensely morbid, those of you out there who have been touched by his art know what I mean. It’s a feeling similar, yet inverse, to that of converting a new fan, or even better, discovering that someone you’ve known for quite some time has been as fervent a fan as yourself, and you never knew it until you shared a moment which caused a simultaneous sigh in the hearts that were affected. What I had been looking for was comfort, or at least an understanding, from someone who felt the same way I did, confused, lost and bereft.

To this day it’s been difficult to play Elliott’s albums without feeling like I had taken a shot to the gut. Each album stands as a ‘sense memory‘ of a time, place, and feeling within my personal history. So far, the one that’s been the hardest for me to listen to, however, has hit little to do with my own experiences, and much more to do with Elliott’s.

Elliott Smith was, strangely enough, Smith’s second album, not the first as to which the self-title might hint. Roman Candle, a collection of mostly unnamed songs, was released first on small Portland label Cavity Search. It was this second self-titled album, thanks in part to Kill Rock Stars, that started to get Smith some notice and acclaim, most notably from Gus Van Sant, whose inclusion of Smith’s spare and ethereal songs in the film Good Will Hunting thrust the musician into the spotlight.

Elliott Smith is rife with songs of pain, alienation, self-loathing, drug use and loneliness. In essence, it is somewhat of a diary of Smith’s experiences set to heartrendingly sweet and tender strums of an acoustic guitar. It begins with the searingly truthful and poetic “Needle in the Hay,” a song now famous for its juxtaposition with the suicide scene in the film The Royal Tenenbaums. Throw in the fact that the following hospital escape scene is set to Nick Drake’s “Fly,” and you have a recipe for a weep-fest. Smith plays a lone acoustic guitar, strumming repeated high and low notes as he breathes such brutally honest lyrics as:

He holds on a hissing ‘s’ as he finishes ‘marks’ which puts a chill in your spine and can make the hairs on your arm stand up. Smith paints a picture of the drug culture in its least glamorous light. The characters in the song are “strung out and thin,” “acting dumb” and “idiot kids.” But as a flip side of the same coin, he comes nowhere near lecturing or chastising. Instead, he tells a story, one that the listener must choose to pass judgment on or not. Smith merely provides the most candid portrait he can create, a stark and hopeless tableau which more than likely had sprung from his own experiences.

“Christian Brothers” begins with a line that would be later echoed in one of Elliott’s last compositions. It begins, “No bad dream fucker’s gonna boss me around,” almost as the song “A Distorted Reality is Now a Necessity to Be Free” intones, “No big brother is gonna bring me down now.” Elliott adds a drum track to the song and a wavering falsetto which humanizes the singer in a way that a studio would simply ignore and correct. “Clementine” is a song akin to the ones that would be featured on his breakthrough indie release, either/or, such as “Angeles”. In it, a man being shuffled out of a bar at closing time after drinking himself to passing out thinks about his relationship and how it has fallen apart. Smith would later write another song based on an old favorite, “Sweet Adeline.”

“Single File” is another song referencing heroin. In this one, another bleak story, he sings, “all we got to show what we really are is the same kind of scars,” and echoing the first song, “you idiot kid, your arm’s got a death in it.” One can picture Smith singing the song to himself, referring to himself as the ‘idiot kid,’ and since a year ago, that is a truly heartbreaking image. I first heard “Coming Up Roses” on a CMJ compilation. It marked the first time I had ever heard Elliott Smith’s music and at the time, it was like nothing else I had experienced. The combination of the sounds of Nick Drake and the Beatles opened a new world for me, one that I quickly enveloped myself in and or which I would never grow tired.

The long notes of the harmonica in “Alphabet Town” which lead into Smith’s breathiest vocals imply a sadness and pain that only that simple instrument can convey. The repeated lines of “her hand on your arm” convey the same feeling. The narrator finally comes to grips with his situation in singing, “I know what you are / I just don’t mind / I won’t say you’re wrong / I know what you want / And it’s what I want / So let’s go out / I’m ready to go out.” “St. Ides Heaven,” a song about being in a state of bliss from alcohol and amphetamines, features beautiful background vocals from Rebecca Gates of the Spinanes.

For me, besides “Needle in the Hay,” the saddest song on the album is “Good to Go.” A combination of a Simon & Garfunkel folk feel with more crushing lyrics create one of the most depressing and gorgeous songs ever written. You can’t help but cast your eyes downward as Smith sings:

“The White Lady Loves You More” continues with the frankness of a life lived with drugs. This tale is about a loved one who is more connected to drugs than to their partner, and that partner makes that awful realization. He knows he cannot break that habit, no matter what he does, and resigns himself to that fact. While all of the songs before “The Biggest Lie” are in some way or another stories of tragic lives, choices, and circumstances, that song is no different, but ends the album in a way that has the singer almost reaching for a ray of hope. The last lines can be interpreted in a few different ways. “Oh, I just told the biggest lie” could be a reference to the previous line, “Everything that you do makes me want to die,” or it could be a reference to a line not mentioned, one that he used to break up with a girl in order to extricate himself from a harmful union. Either way, Smith expresses a sliver of hope, for either a new life or the admittance of a love he is hesitant to acknowledge.

Before October 21st of 2003, this collection of songs was a powerful sketch of lives made nearly unlivable by drug use. After that time, it has become even more powerful as a look into the tortured soul that was Elliott Smith. The honesty he expressed in his beautiful songwriting and singing were, we now know, simply not enough to exorcise the inner demons that he fought with daily. This is why this album is so difficult to revisit. Listening to it again reminds me of looking back at past painful relationships; choices made that were life mistakes, and events in life that you would just as soon forget. But every once in a while, those memories come back, and there was something about those things that make them worth revisiting. Relationships create fond memories to offset the pain, mistakes made create life lessons, and life events that were one time distressing, can offer comfort later in life. And so it is that most of us will finally get around to letting Elliott’s music back into our lives. With each listen, Elliott Smith will become less painful and more celebratory. Because, in the end, isn’t that how we should feel about Elliott? We should want to celebrate what his music did for us, and share him with the world.